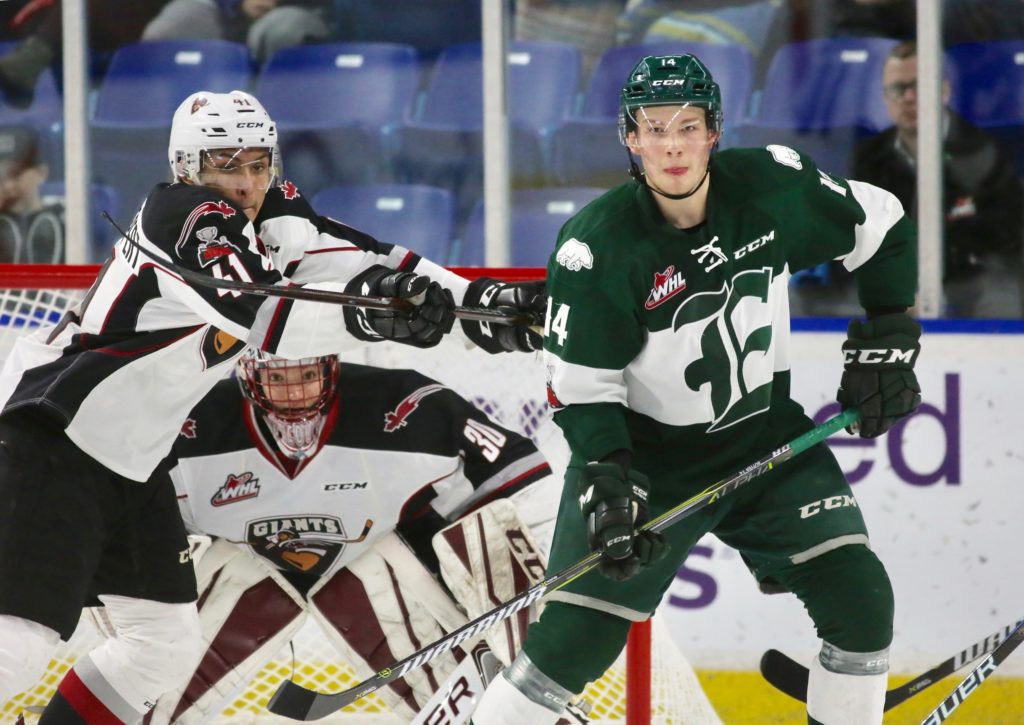 Tonight in Langley, the Vancouver Giants will take the ice against the Western Conference leading Everett Silvertips for the fifth of six meetings in 2017-18. The Silvertips have won two straight and have gone nine straight games without a regulation loss. The Giants have dropped two straight, but are 6-4 in their last 10. Jason McKee’s troops have played much of the month of February with up to six regulars missing from the lineup, and tonight will be a huge test against a Silvertips team that they are 1- 3 against so far.

Last Game: A 4-1 win in Spokane on Wednesday

Garrett Pilon: The talented forward was acquired near the trade deadline in a trade with Kamloops. He’s third in team scoring with 30 goals and 39 assists for 69 points and has 25 points in 19 games since joining the Silvertips. In five games against Vancouver in 2017-18, Pilon has four goals and five assists for nine points.

Patrick Bajkov: The 20-year-old has missed just two games in the past four seasons. He leads all Everett skaters with 58 assists and 86 points. He’s already eight points ahead of his previous season high in points. Last season he had 78 in 71 games which also led the team.

Kevin Davis: 20-year-old Kevin Davis comes into the weekend with eight goals and 56 points which puts him tied for sixth in the WHL in scoring among defencemen. Davis is three points shy of matching his totals from a season ago. In four games against the Giants so far, he’s registered two assists.

Ondrej Vala: The 19-year-old prospect of the Dallas Stars was brought in to Everett in the same trade with Garrett Pilon. In 19 games with the Silvertips, Vala has notched five assists and is a +13. In five games against Vancouver (with Kamloops and Everett) he’s notched a goal and two assists.

Carter Hart: The two-time reigning WHL Goaltender of the Year in the WHL comes into tonight’s game leading the league in most statistical categories for goaltenders. He sits number one in goals-against-average (1.56), save percentage (.951) and shutouts (7) and his record of 24-4-1-3 is equally impressive. In two appearances this season against Vancouver, Hart is 2-0 with a .957 save percentage and a 1.00 goals-against-average.

Matt Fonteyne: The third 20-year-old on the Everett roster is forward Matt Fonteyne, who comes into tonight’s game leading the team in goals with 31. In four games against the Giants, he’s recorded three goals and three asissts, and when these two clubs last faced each other on February 10th he was named the game’s second star after posting a goal and an assist.

Last Game: A 4-2 loss at home Sunday against Red Deer

Tyler Benson: The Giants captain currently sits second on the team in scoring with 55 points in 46 games played. He’s scored twice against Everett in 2017-18 which is tied with Dawson Holt for the most points in games played against Everett. Coming into tonight’s game he’s recorded three goals and nine assists for 12 points in his last 11 games.

Dawson Holt: The 1999-born forward has a goal and an assist against Everett his season, and is coming off a game Sunday where he scored shorthanded in the first period to stake the Giants to a lead. With 11 goals and 20 assists for 31 points, Holt has more than doubled his previous season high for points (14) which he set last season.

Alex Kannok Leipert: The Giants get some good news today as rookie defenceman Alex Kannok Leipert returns to the lineup. The 2000-born rearguard hasn’t played since February 7th in Kelowna, and his return gives the Giants six healthy, experienced options against a potent Everett attack. Through 50 games he’s notched three goals along with 16 assists for 19 points.

Darian Skeoch: The 20-year-old returned to the Giants lineup on Sunday against Red Deer after missing the last six games due to injury. Now, with an additional week of practice and rest under his belt, it should bode well for Skeoch who’s toughness and experience will no doubt be an asset to the Giants against the stingy Silvertips tonight.

David Tendeck: What a season it has been for the Giants netminder. The 18-year-old is 22-12-2-2 on the season with a .916 save percentage (second to Carter Hart) and a 2.89 goals-against-average (third to Carter Hart). Tendeck is 1-3 against Everett in 2017-18 but has just six losses to his credit since December 1st.

Push the Pace: Keeping Everett in their own zone is going to be of huge importance tonight for the Giants. Carter Hart has allowed more than three goals in a game just once in 32 appearances this season, so in order to have the best chance to win, the Giants have to dictate the play in the offensive zone and apply as much offensive pressure as possible. A ‘shoot first’ mentality and a strong net-front presence will also be major keys to their success tonight.