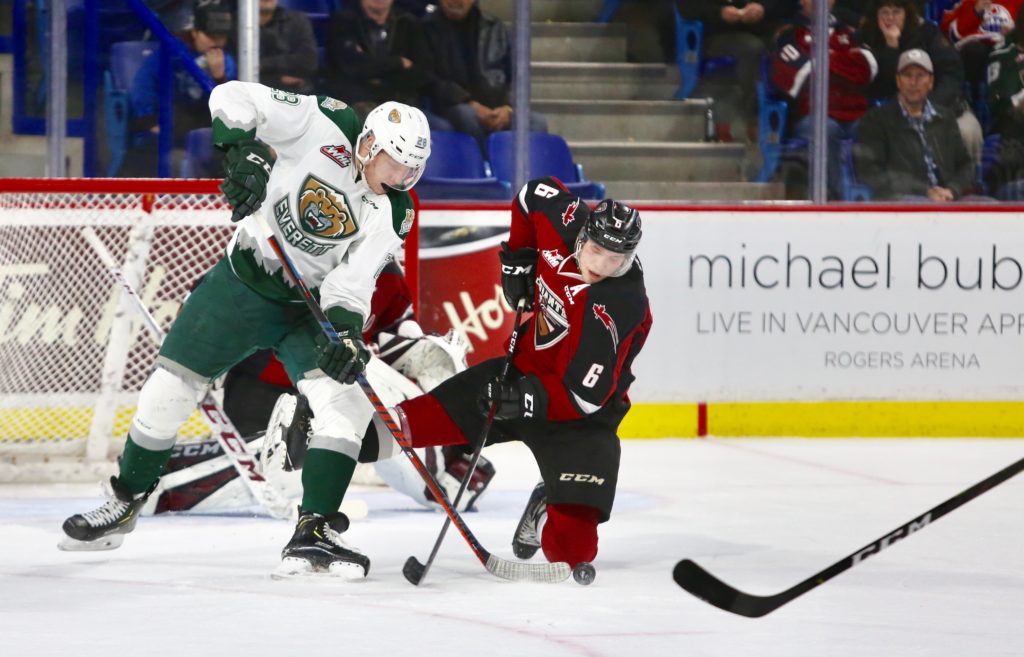 Tonight at home the Vancouver Giants look to climb back above the .500 mark when they battle the Everett Silvertips. Tonight’s game marks the first of four meetings on the season between the I-5 foes and the Giants are looking to even their October record to 5-5 with a win. The Silvertips have won four straight and currently sit atop the US Division. The Giants come into the weekend ranked third in the B.C. Division.

Last Game: A 2-1 overtime victory at home over Prince Albert on Saturday night.

Coming into the weekend, nobody in the WHL has scored more goals so far this season than Silvertips captain Bryce Kindopp. Kindopp has struck for 10 goals through 11 games and holds a one-goal lead on Medicine Hat’s Ryan Chyzowski. Last season Kindopp had two goals in four meetings with the Giants. He’s managed two goals and two assists for four points in his past three games.

The Vancouver Giants are no recent stranger to Cole Fonstad. The 2000-born product of Estevan, SK was recently traded to the Everett Silvertips by the Prince Albert Raiders. Since the trade, Fonstad has appeared in three games with the Silvertips and has secured a goal and five assists for six points. Through 12 games this season, Fonstad has registered three goals and 12 assists for 15 points. He brings a five-game point streak into this game and has scored two goals along with 10 assists for 12 points in that span.

Last Game: A 3-1 loss at home Sunday against Victoria

No active Vancouver Giant has recorded more career points than 20-year-old defenceman Dylan Plouffe. The product of Sherwood Park, AB has suited up in 258 career WHL regular season games with the G-Men and has compiled 24 goals and 88 points for 112 points. His 258 games with the Giants is the most on the team. Assuming Dylan Plouffe dresses in 67 games this season he would surpass Neil Manning for the all-time lead in games played for the Giants. Through 14 games this season, Plouffe has registered one goal and 10 assists for 11 points. In his past eight games, he’s scored one goal and six assists for seven points. Heading into the weekend, Plouffe’s 11 points have him tied for third in league scoring among defencemen. In four games against the Silvertips last season, Dylan Plouffe recorded three points.

For the first time this season, the Vancouver Giants are entering a game with a full bill of health. Sophomore forward and 2020 NHL Draft prospect Justin Sourdif missed the two previous home games due to injury, but should be back in the lineup tonight for the Giants. Sourdif has six goals and six assists for 12 points in 12 games. He scored his first WHL goal against the Everett Silvertips back in September, 2018.