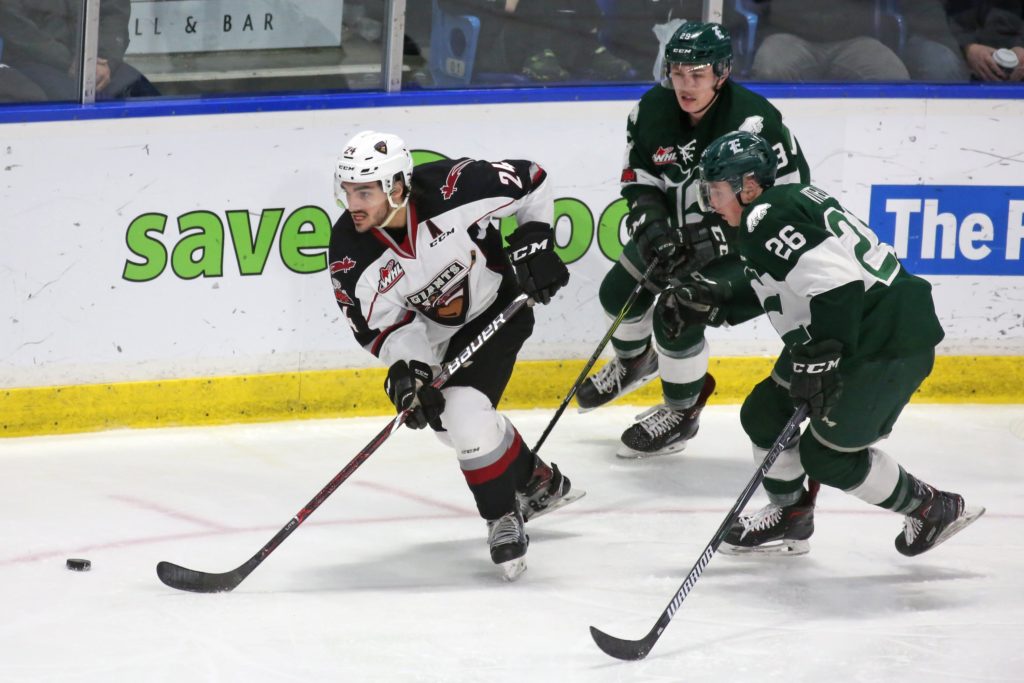 Tonight in Langley, the Vancouver Giants officially kick-off their 18th season in the WHL when they play host to the reigning Western Conference champions, the Everett Silvertips. Michael Dyck’s Giants finished the pre-season with a 2-3-0-1 record and are looking to kick-start their season with a victory on home ice. The Giants are 9-7-0-1 lifetime in home opening games.

Connor Dewar: The 19-year-old was named captain of the Everett Silvertips back in June. The prospect of the Minnesota Wild is coming off a terrific third season in the WHL where he notched a new career high in goals (38) and assists (30). In three full seasons in the WHL Dewar has only missed three games. In five games against Vancouver last season he had four gour goals and four assists for eight points.

Riley Sutter: Fellow 19-year-old Riley Sutter is coming off a career year with Everett. Through 68 games, Sutter compiled 25 goals and 28 assists for 53 points. Ironically, Sutter was selected by the Washington Capitals one pick after Dewar was picked by Minnesota in June’s NHL Draft. He had six goals against the Giants last season.

Wyatte Wylie: The third NHL drafted prospect on the Silvertips roster is Everett, WA’s own Wyatte Wylie. The Philadelphia Flyers prospect had six goals and 25 assists for 31 points in 72 games a season ago, and should factor prominently into the Everett offensive attack once again in 2018-19.

Sahvan Khaira: At 6’4” and 225 pounds, 20-year-old defenceman Sahvan Khaira is hard to miss. The Surrey, B.C. native won a championship with the Swift Current Broncos a season ago against Everett, and now he’ll patrol the Silvertips blueline in all situations. His older brother Jujhar Khaira plays for the Edmonton Oilers and is also a former Everett Silvertip.

Dustin Wolf: The Carter Hart chapter is over for the Everett Silvertips which means that it’s now time for 17-year-old Dustin Wolf to take the ball and run with it. Wolf’s numbers a season ago were impressive. He was 13-6 with four shutouts, a 2.25 goals-against-average and a .928 save percentage. He faced the Giants once in the pre-season and shut them out.

Work Ethic: The calling card of the Everett Silvertips has always been their work ethic. That identity probably won’t be changing anytime soon as 16 returning players played a ‘regular’ role with the Silvertips last season en route to a berth in the league final. The Giants will need to match or surpass the work ethic of the Silvertips tonight if they want to be successful.

Jared Dmytriw: The 20-year-old was named captain of the Giants yesterday. The Craven, SK native had 15 goals and 11 assists last season while appearing in 71 games. Tonight will be an emotional night for Dmytriw as he dons the ‘C’ for the first time. During the pre-season, Dmytriw chimed in with three assists to lead all Giants that category.

Milos Roman: The fourth-round pick of the Calgary Flames was returned to the Giants yesterday. The product of Kysucke Novo Mesto, SVK had 10 goals and 22 assists for 32 points a season ago, and should get his share of ice-time in all situations for the Giants as they get their matchups, etc. established early on.

Bowen Byram: The 17-year-old Cranbrook, B.C. native is poised for a big year. Fresh off a Western Conference Rookie of the Year nomination and a gold medal at the 2018 Hlinka Gretzky Cup, the 2019 draft eligible defenceman is looking to build off a season where he scored six times while adding 21 assists.

Matt Barberis: As the lone 20-year-old on the back-end for Vancouver, Matt Barberis will likely be tasked with playing some tough minutes against the top Everett forwards. Barberis is no stranger to this type of emotion, and he and the other veterans will need to do their part to help quell the nerves of some of the younger players.

David Tendeck: The Arizona Coyotes sixth-round pick will man the crease tonight for the Giants. Tendeck was a second-team WHL all-star in 2017-18 and is fresh off his first NHL Training Camp. The Giants will look to Tendeck to provide his usual strong, steady goaltending against a potent Everett attack.

Win By Committee: The Giants can’t rely on a single line, or a single defensive tandem to help them win. Tonight and all season long they are going to need collective buy-in from all hands on deck. The Giants biggest strength is their depth throughout the lineup, and hopefully that shines through tonight when they take the ice for their first of 68 games on the season.