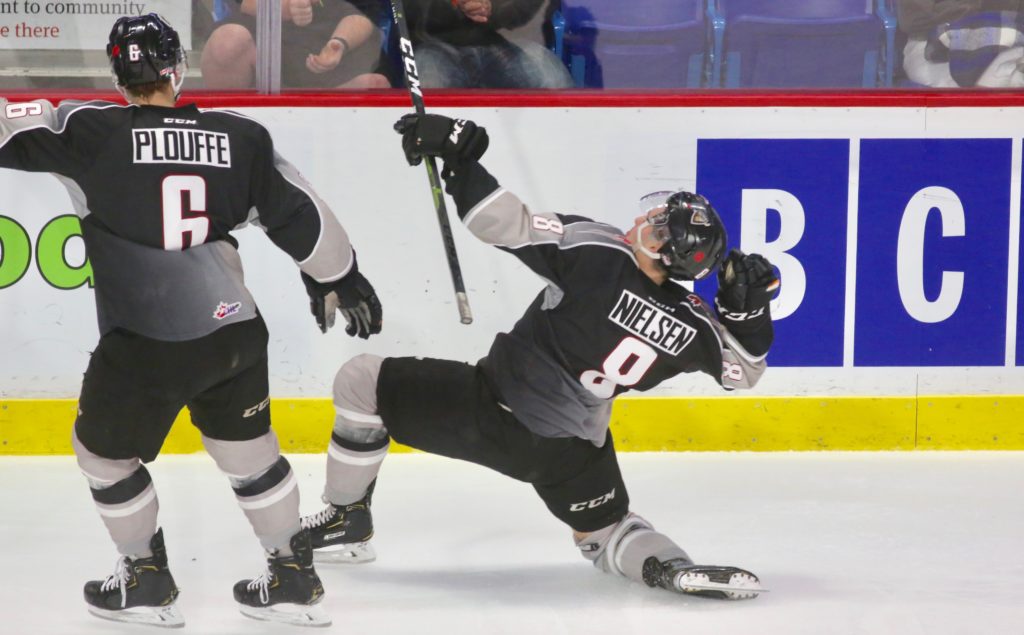 Tonight at the LEC the Vancouver Giants wrap up their November home schedule with a Saturday night showdown against the Edmonton Oil Kings. After going six straight games without a regulation loss, the Giants have since lost two straight and are looking for their 12th victory of the season. The Edmonton Oil Kings are coming off a 5-3 loss last night to the Victoria Royals. Both teams have secured points in six of their last 10 games. Tonight marks the lone meeting of the season between these two clubs.

2002-born forward Jake Neighbours is enjoying a strong second season in the WHL with the Edmonton Oil Kings. The product of Airdrie, AB was selected one spot behind Justin Sourdif (fourth overall) in the 2017 WHL Bantam Draft, and has managed five goals and 21 assists for 26 points through 24 games. Over the course of his past 13 games, he’s notched three goals and 13 assists for 16 points. In 47 games last season, Neighbours scored 11 goals along with 13 assists for 24 points. In the summer, he earned a silver medal with Justin Sourdif and Giants head coach Michael Dyck at the 2019 Hlinka Gretzky Cup. Neighbours recently cracked NHL Central Scouting’s Preliminary Players to Watch List as a ‘B’ ranked prospect.

20-year-old forward Riley Sawchuk has been quite a find for the Edmonton Oil Kings. The Prince Albert, SK product joined the Kings after suiting up in 195 games for the Tri-City Americans. Fresh off a 20-goal campaign in 2018-19, Sawchuk leads all Oil Kings in goals (11) and points (28) through 24 games. He’s on pace for a 79 point season which would obliterate his previous season high of 53 that he set one season ago.

Last Game: A 3-1 loss on Wednesday

2002-born forward Justin Sourdif is having a strong second season with his hometown Vancouver Giants. The product of Surrey, B.C. comes into tonight’s game ranked second on the team in both goals (9) and points (19). In a span of seven November games, Sourdif has compiled three goals and four assists for seven points. Sourdif also leads all Giants skaters with a +14 rating. In 89 career games with the G-Men, Sourdif has registered 32 goals and 33 assists for 65 points. Originally selected by the Giants with the third overall pick in the 2017 WHL Bantam Draft, Sourdif was one of five WHLers who recently cracked NHL Central Scouting’s Preliminary Players to Watch List as an ‘A’ graded prospect. Among those five players, Sourdif and Kamloops Blazers forward Connor Zary were the only forwards.

The lone goal for the Giants Wednesday in Portland came off the stick of Bowen Byram. The fourth overall pick in the 2019 NHL Draft secured his third goal of the season in the second period, and was named the game’s third star for his efforts. For the season, Byram has now registered three goals along with 12 assists for 15 points and a +5 rating. As we get closer to December 9th, the Giants star defenceman will be waiting to hear his name called to Canada’s World Junior Camp roster. In the meantime he’ll continue to log huge minutes for the Giants in all situations.