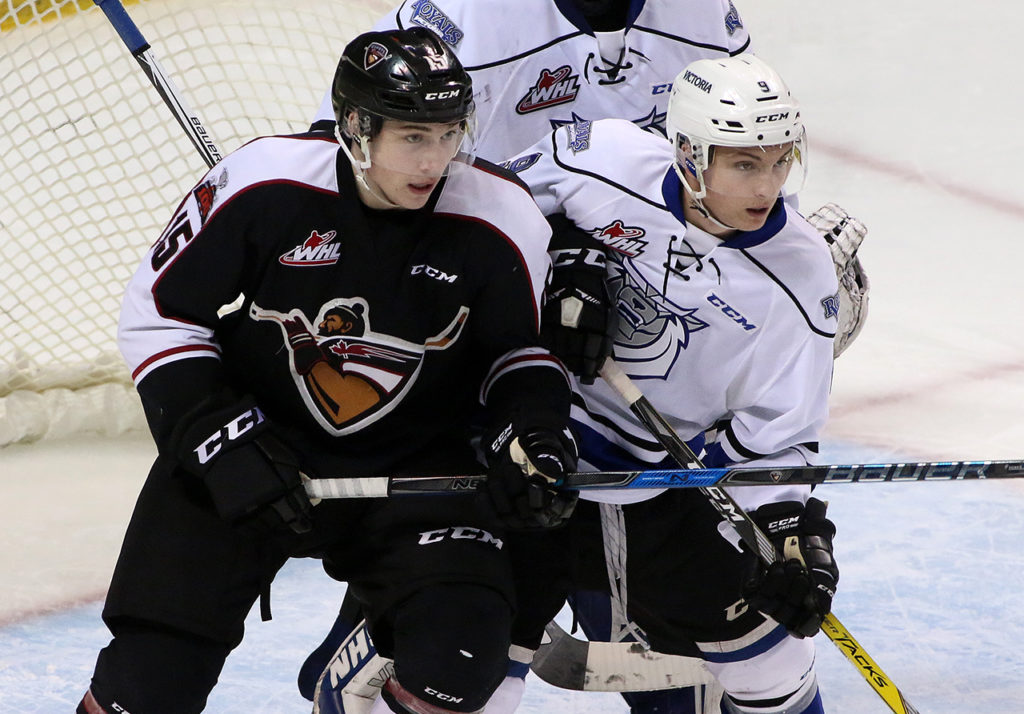 Tonight in Victoria, the Vancouver Giants take aim at a 2-0 series lead in their first-round matchup with the Victoria Royals. Jason McKee’s troops defeated Victoria 2-1 in Game 1 and now both teams will look to make some subtle adjustments ahead of tonight’s Game 2 which goes at 7:05 PM from the Save on Foods Memorial Centre in Victoria.

Tanner Kaspick: The 19-year-old prospect of the St. Louis Blues was a factor and a presence all-game-long for the Royals. He had their lone goal in the second period and now for his career has seven goals and nine assists for 16 points in 38 career playoff games.

Matthew Phillips: The 19-year-old Calgary Flames prospect assisted on the Royals second period tally in Game 1 and had more than his fair share of chances to score. Phillips is especially dangerous on the power play which was held at a 0-for-4 clip a night ago.

Chaz Reddekopp: The 20-year-old logged a ton of key minutes in all situations for the Royals in Game 1. Though he didn’t appear on the scoresheet he was an even in plus-minus and saw plenty of time against the Giants top scorers.

Jared Freadrich: The 19-year-old led all Royals with 12 goals during the regular season. He helps quarterback the Royals power play and is no slouch in his own zone either. Fun fact: He was traded straight-up for Jared Dmytriw during the summer. Freadrich was previous with Red Deer.

Griffen Outhouse: On most nights when you stop 31 of 33 you win, but that was not the case last night for 19-year-old Griffen Outhouse. The workhorse goaltender for the Royals was a star-worthy performer in Game 1, but took the hard-luck loss. The Royals feel confident whenever he’s between the pipes.

Lane Zablocki: The 19-year-old returns to the Royals lineup after serving a two-game suspension. Zablocki’s offensive totals haven’t overwhelmed this season, but he had six playoff goals in six games last season with Red Deer and had seven the season before that with Regina. He’s a playoff-type guy who can make life very difficult for the opposition at both sides.

Milos Roman: In his first ever WHL playoff game, Slovakian import forward Milos Roman made his presence known. He scored the first goal of the game at 5:48 of the second period and also played strong, reliable defensively minutes.

Ty Ronning: The Giants leading scorer in the regular season was named the game’s third star after posting an assist and four shots-on-goal in Game 1. He had great chances to score, but Griffen Outhouse was there when called upon for Victoria. It was an encouraging start for Ronning in Game 1 and he’ll look to build off that heading into Game 2.

Matt Barberis: The 19-year-old forward was credited with the game-winning goal in last night’s game and finished with a +2 rating on top of that. He also logged some big minutes defensively with the Giants only able to use five for what really ended up being the whole game.

Brennan Riddle: The 20-year-old was a big-time factor in the Giants victory in Game 1. He assisted on the game-winner, was a +2 and did a wonderful job defending the likes of Tanner Kaspick, Matthew Phillips and Noah Gregor.

Trent Miner: The young goaltender for the Giants turned aside 40 shots in his WHL playoff debut and was named the game’s first star for his efforts. It was an encouraging start to the series for the Giants who have no shortage of confidence playing in front of the young rookie.

Mental Reset: Winning one game does not define a series and tonight the Giants will need to have a short memory when it comes to Game 2 and their rematch tonight with the Royals. A 2-0 series lead would do wonders for this team’s confidence as Games 3 and 4 are set to take place next week at the LEC on Tuesday and Thursday. The focus has to remain the same though for tonight as they look to build upon the many strengths and positives from Game 1.