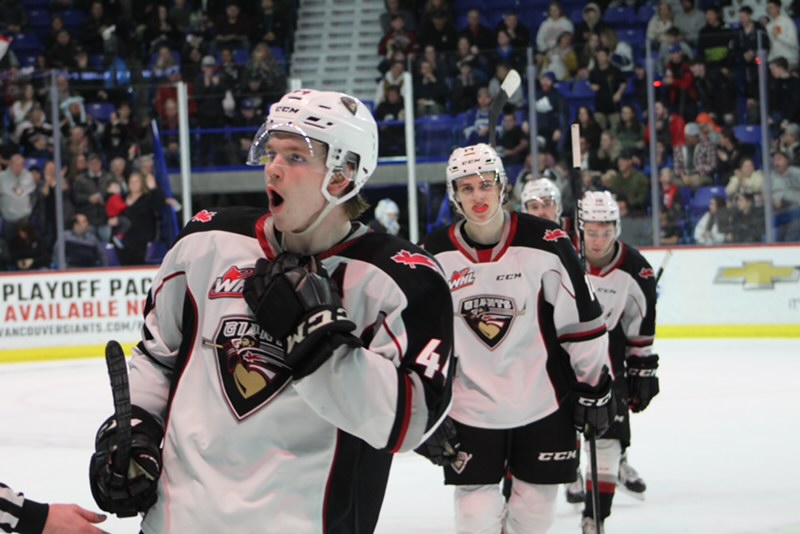 Chapter two of this weekend’s three-in-three showdown between the Vancouver Giants and Victoria Royals goes down tonight at the Save on Foods Memorial Centre. Last night at home the Vancouver Giants earned a 3-0 victory on the strength of Trent Miner’s 18 saves, and multi-point efforts from Bowen Byram and Tyler Preziuso. The Giants head into action tonight ranked second in the B.C. Division standings due to the two fewer games they’ve played compared to the Royals. The Giants have defeated the Royals in four straight meetings, and are looking for their third win in four tries against Victoria away from home.

Last night at the LEC the Victoria Royals fell 3-0 to the Giants. That said, there were some encouraging takeaways for Victoria:

During the month of February, Giants defenceman Bowen Byram has been one of the many consistent performers for the Vancouver Giants. Below are some February facts pertaining to Bowen Byram:

In six games against Victoria this season, Bowen Byram has two goals and three assists for five points.

Trent Miner’s 18 save shutout helped backstop the Giants to their 31st victory of the season last night at home. For the season Miner’s record now sits at 13-8-2-1 with one shutout, a 2.60 goals-against average and a .907 save percentage. In two meetings against Victoria this season, Miner’s record is 2-0 with a goals-against average of 1.00 and .949 save percentage. Miner is 4-2-0-1 lifetime against the Victoria Royals during the regular season.