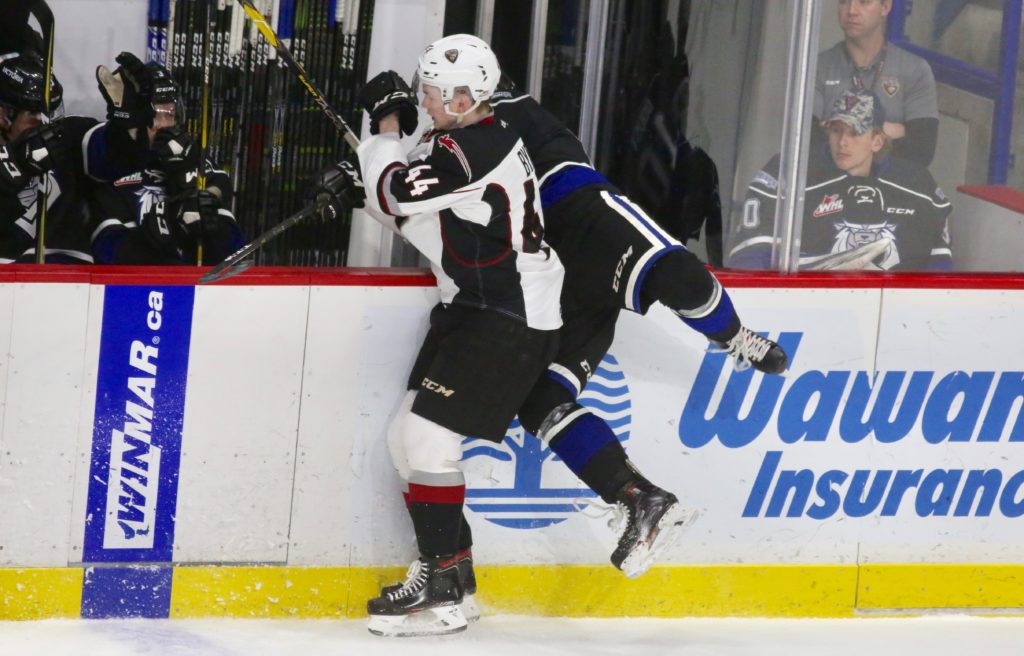 Tonight on Vancouver Island, the Vancouver Giants take the ice for the second time in as many days against their B.C. Division rivals, the Victoria Royals. Last night the Giants downed Victoria 4-0 and in the process moved to within one single point of clinching the B.C. Division crown. Additionally the G-Men moved within three points of the Everett Silvertips for first place in the Western Conference standings. Tonight will mark meeting number nine on the season between the two clubs and the first Giants visit to Victoria since December 15th.

Last Game: A 4-0 loss last night to the Giants on the road

GET READY FOR OUTHOUSE:

After a night off last night, it’s pretty much a certainty that 20-year-old Griffen Outhouse will start each of the next two games this weekend for the Royals against the Vancouver Giants. Outhouse has appeared in 192 career games for the Royals and holds a lifetime record of 111-59-11-4. Of those 111 wins, 21 have come against the Giants. In 30 career appearances against the Giants, Outhouse has compiled a record of 21-6-2-0. So far this season he’s 3-2-1 against Vancouver with a 2.29 goals-against-average and a .929 save percentage.

Coming into action tonight the Royals are a 12-point swing away from clinching a playoff spot. The ninth placed Kamloops Blazers sit at 50 points and have 24 more available points that they can grab. The Royals come into action tonight with 63 points, meaning 75 points would get them into the playoffs, assuming Kamloops wins their remaining 12 games. That gap could very well shrink even moreso depending on how the Blazers fare this weekend. As far as a top two playoff spot, the Royals come into action tonight leading Kelowna by eight points, and are 11 points shy of clinching home ice advantage in Round 1.

Last Game: A 4-0 win at home last night over the Royals

Last night the G-Men got second period goals from defencemen Kaleb Bulych and Seth Bafaro. Neither player is primarily known for their offense, so you can imagine the delight for the coaching staff and their teammates when both came through with important goals for the Giants to give them a lead. Bulych now has two goals in his past four games, and is logging big minutes alongside 20-year-old Dallas Hines, while Seth Bafaro has fit in very well opposite Dylan Plouffe.

OVER TO YOU TRENT:

David Tendeck did not travel to Victoria today with the Giants for the rematch as he’s attending to a family matter, meaning Trent Miner will likely get the nod tonight with Braedy Euerby backing him up. How nice is that: Instead of the NHL drafted Tendeck who had a 26 save shutout last night, the Victoria Royals will have to face the draft eligible Trent Miner who is 20-4-1-0 this season with a 1.90 goals-against-average and a .929 save percentage! He’s 1-1 this season against Victoria with a 1.52 goals-against-average and a .939 save percentage.

Justin Sourdif is riding a five-game point streak. During that span he’s notched four goals and four assists for eight points. Overall he’s got six goals and six assists for 12 points in his last nine games. He’s now two goals shy of 20 goals, and he leads all 2002-born skaters in goals. Assuming Sourdif gets to 20, he’d be just the third Giant ever to do so during his 16-year-old season. The other two: Gilbert Brule and Evander Kane.