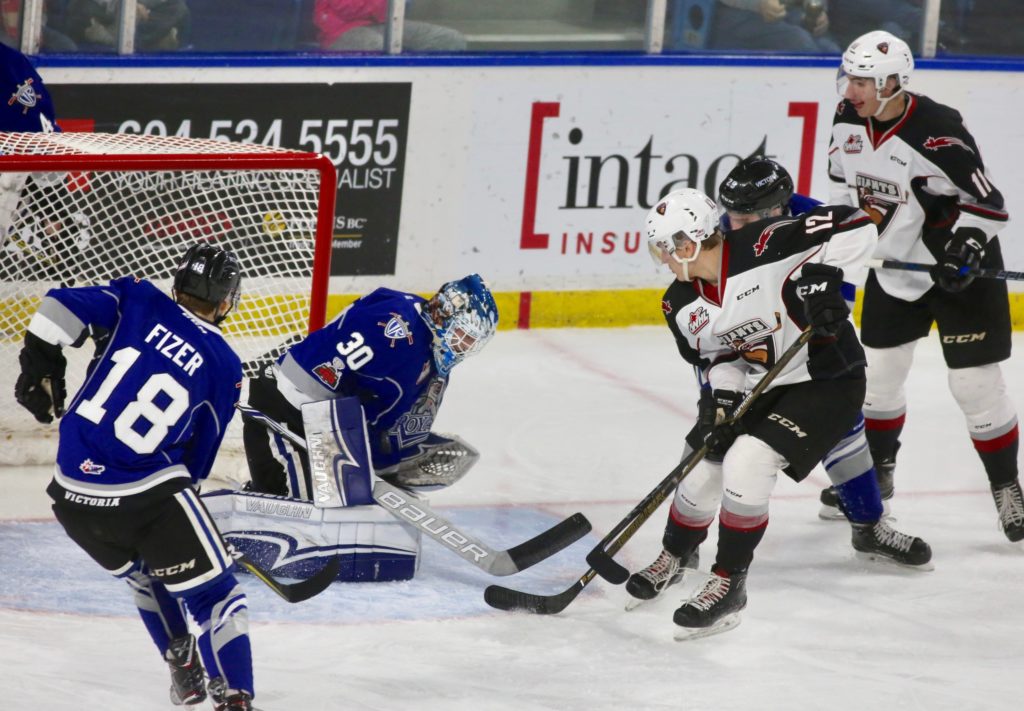 Tonight in Victoria, the grind continues for the Vancouver Giants who will take the ice for their third game in their third different city in a span of four nights. To their credit, the Giants have showed some remarkable resiliency during the month of February, going 5-2 through their first seven games, and have done so with a handful of regulars missing from their lineup. Tonight is yet another potential playoff preview for the Giants who meet the Royals for a 10th and final time during the regular season. The rivalry between these two clubs is arguably as strong as it’s ever been, and with a victory the Giants could finish the season series with a plus-500 record against their foes from the Island.

Matthew Phillips: The Calgary Flames prospect is in the midst of a 20-game point streak. During that span he’s compiled 16 goals and 21 assists for 37 points! He’s failed to record a point in only one game in the calendar year of 2018. Against the Giants he leads all Royals with eight goals and eight assists for 16 points in nine games.

Dante Hannoun: In his past six games, Hannoun has struck for a goal and nine assists for 10 points. He sits third in Royals scoring with 68 points in 55 games and has registered three goals and eight assists for 11 points in seven games played against Vancouver in 2017-18.

Jared Freachrich: The 19-year-old defenceman comes into tonight with 11 goals and 18 assists for 29 points which leads the team on both categories. He’s especially dangerous on the power play as he’s notched eight goals and 10 assists with the extra attacker. In nine games against Vancouver Freadrich has posted a goal and four assists.

Kade Jensen: Due to a wide variety of circumstances, Kade Jensen has not faced the Giants as a member of the Victoria Royals. However he did face the Giants with Brandon back on October 20th and had a goal. Since joining the Royals though, Jensen has scored four goals while adding five assists for nine points in 22 games.  The rugged 20-year-old can do a little bit of everything and should log big minutes tonight against the Giants top forwards.

Griffen Outhouse?: Notably absent from the Royals previous two games was Griffen Outhouse, the workhorse goaltender who’s appeared in 50 of Victoria’s 60 games. Head Coach Dan Price said after last night’s game that Outhouse is ‘day-to-day’ and could return tonight against Vancouver. Should that be the case, the Giants are no stranger to Outhouse. He’s 5-3-0-0 against Vancouver with a 3.01 goals-against-average and a .920 save percentage in eight appearances in 2017-18. Should he not go, it will either be Joel Gryzbowski or Dean McNabb getting the nod for the Royals.

Tanner Kaspick: The 19-year-old prospect of the St. Louis Blues has made a terrific impact since joining the Royals in a Trade Deadline deal with Brandon. In 14 games in Royals blue he’s registered 10 goals and nine assists for 19 points. In two games against the Giants he’s recorded two goals including the OT winner when these teams last faced each ot her on January 26th at the LEC.

Last Game: A 2-1 victory at home last night against Edmonton

Brayden Watts: The 18-year-old California native has posted goals in back-to-back games and now has 14 goals and 18 assists for 32 points to rank him sixth on the team in scoring. Watts has nine multi-point games this season and is already 14 points ahead of his previous season’s point total.

Kaleb Bulych: The rookie defenceman was named the first star in last night’s victory against Edmonton.  He didn’t factor into the scoring, but finished with a +1 rating and did a terrific job in his own zone breaking up rushes, finishing checks and defending in his own zone. Since the rash of injuries to the Giants blueline, Bulych, perhaps more so than any other young defenceman has embraced the challenge of the added ice time and responsibility.

Bowen Byram: 16-year-old Bowen Byram assisted on the game winning goal last night and now has three goals and four assists for seven points in his last seven games. The rookie has also been a big-time gamer for the team, particularly in February when injuries have really taken their toll. Through 46 games he’s scored six goals while adding 15 assists for 21 points and a +7 rating.

Trent Miner?: Given David Tendeck’s work load as of late, tonight might be an ideal situation to give Trent Miner his second WHL start. In three appearances he’s 1-0 with a .929 save percentage and a 2.54 goals-against-average since joining the team after the Trade Deadline. Should Miner get the nod tonight it would mark the first time in seven games that David Tendeck wouldn’t start.

Maintain the belief: The lineup in Victoria tonight will look eerily similar to how it has in each of the past four games for the Giants. That means six regulars still sidelined with injuries. With all of that said, the Giants are 3-1 during that stretch and most importantly they have brought a genuine work ethic to the table each night. They haven’t let key absences impact their approach and the coaches and players all deserve a ton of credit for that fact. Tonight will be another challenge against a high-powered Royals offense, but the Giants have shown a strong resiliency up to this point, and no doubt they have the confidence that they can do it again tonight.