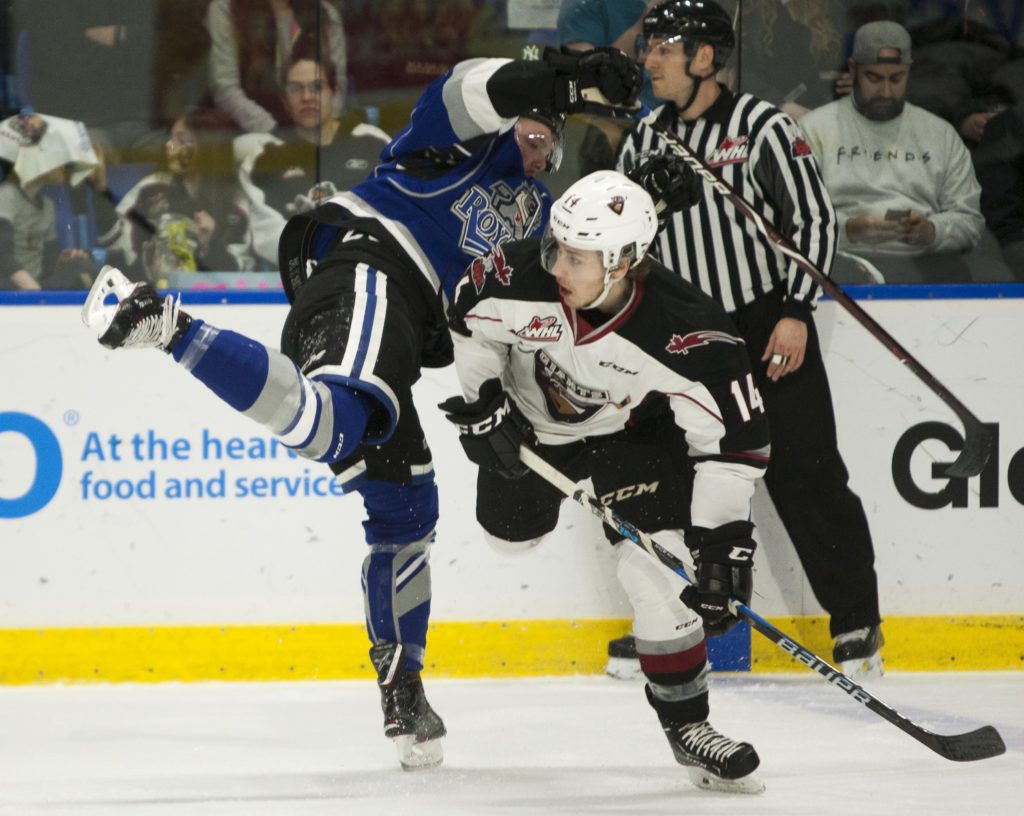 Tonight in Victoria the Vancouver Giants and Victoria Royals meet in a crucial Game 5 matchup. Wheover prevails tonight will take a 3-2 series lead and have a chance to win the series two days later back in Langley. The Giants are coming off their most disappointing game of the playoffs – A 7-3 home loss Thursday night. That said they’ve shown uncanny ability to respond after tough losses all season and tonight they’ll attempt to snag their second road victory of the series.

Dante Hannoun: The 19-year-old Delta native exploded for five points in Game 4. He now shares the team lead in playoff scoring with six points. During the regular season Hannoun had 79 points in 66 games (a new career high) and posted three goals and eight assists for 11 points against the Giants.

Matthew Phillips: Not to be outdone in Game 4 was Matthew Phillips. The Calgary Flames prospect had a goal and three assists and is tied with Dante Hannoun for the team lead in scoring with six points through four games. Phillips led all Royals with 112 regular season points – Most among all Western Conference skaters.

Jared Freadrich: the 19-year-old has recorded points in three straight games and leads all Royals defencemen with four points in the series. He’s also got an even plus-minus through four games.

Ralph Jarratt: The 18-year-old had a goal in Game 4 and now has a goal and an assist for two points in three games played. At 6’2” and 223 pounds, Jarratt provides a solid two-way mix for the Royals. He was named their Defenceman of the Year during the regular season.

Griffen Outhouse: Through four games this series the 19-year-old is 2-2 with an .899 save percentage and a goals-against-average of 3.30. He made 27 saves on 30 shots faced in Game 4 to help his team even up the series.

Special Teams: The Royals power play went three-for-seven in Game 4 and has connected in three of the four games so far in the series. They’re the best team in the WHL at drawing penalties and have out-powerplayed the Giants by a 21-12 margin in the series.

Tyler Benson: The Giants captain has at least a point in every game this series. He leads all Giants with a goal and five assists for six points. He also leads the Giants with 10 penalty minutes.

Milos Roman: The talented Slovak had his three-game goal scoring streak snapped in Game 4. He’s been a solid two-way contributor during the series though for the Giants and look for him to be a big factor in their offensive and defensive schemes tonight.

Darian Skeoch: The menacing 20-year-old returns to the Giants lineup tonight after missing virtually the entire series to this point. Skeoch was kicked out of Game 1 just a minute and 15 seconds in and was assessed a three-game suspension for a hit on Royals forward Dino Kambeitz. Skeoch’s return to the lineup gives the Giants a physical presence that will definitely come in handy heading into a hostile environment tonight.

Matt Barberis: Also returning to the Giants lineup from suspension is 19-year-old Matt Barberis. The veteran has a goal and two assists for three points through three games in the series and is a +3. His return helps in all areas of the ice, especially the power play.

David Tendeck: Tendeck, like the rest of his teammates struggled in Game 4. After a first-star performance in Game 3, he took the loss in Game 4. Tonight will be his first road start of the series.

Ty Ronning: He’s got a point in each game of the series but they’ve all been assists. While that may be concerning to some it’s not for Ty or the coaching staff. He’s been a positive factor and a big contributor to the Giants success in the series and he will a big focal point for the Giants in their attack tonight.