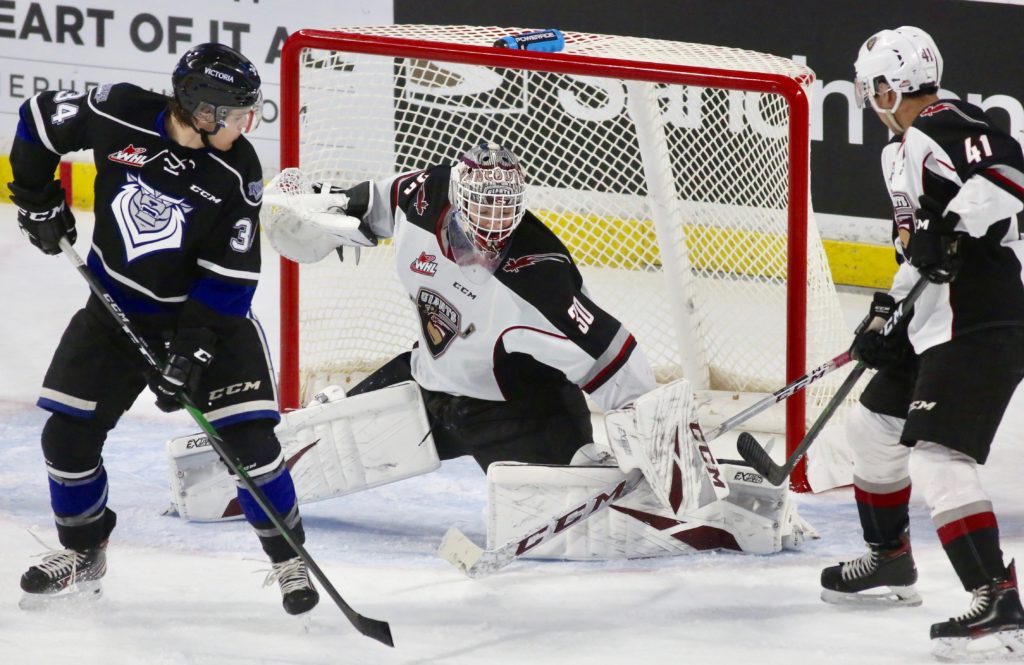 Tonight on the Island, the Vancouver Giants and Victoria Royals will once again do battle in the back-half of a home-and-home weekend set. Last night at the LEC the Vancouver Giants put forth one of their most complete efforts of the season in a 4-1 win over the Royals. The win for the Giants, coupled with a Kelowna loss to Everett moved the G-Men within five points of third place in the B.C. Division while still holding two games in hand.

With an assist last night on the Royals lone goal, 2001-born forward Tarun Fizer extended his point streak to three straight games. Fizer has three goals and two assists for five points so far this week and sits second on the Royals in overall scoring with 14 goals and 23 assists for 37 points. Fizer leads all Royals with a goal and three assists for four points against the Giants this season.

THE RETURN OF FARKAS?:

Last night the Victoria Royals were without their star over-age goaltender Shane Farkas. Farkas is the reigning WHL Goaltender of the Week, but did not travel with the Royals to the Mainland for yesterday’s game. His return to the lineup could be imminent tonight, which would certainly give the Royals a positive shot in the arm. Farkas has earned an 18-7-1-0 record with a 2.11 goals-against-average and a .932 save percentage along with two shutouts this season. , and two shutouts in 27 games. Against Vancouver, Farkas has compiled a record of 7-1 with two shutouts. He’s 2-1 against them this season with a 1.01 goals-against average and a. 965 save percentage.

Fresh off a three-goal night, Giants forward Eric Florchuk continues to make a strong early impact with his new team. In three games with his new team, the Washington Capitals prospect has managed three goals and three assists for six points. He found instant chemistry last night alongside Milos Roman and Cole Shepard, and it will be interesting to see if those three get another look together tonight on the road.

After missing 10 games due to the World Juniors, Bowen Byram returned to the Giants lineup last night, and had a profound (yet wonderfully subtle) impact on the game. Byram didn’t register a point, but he impacted the game positively in all three areas of the ice. The confidence gained from having Byram back in action was noticeable last night, and he’ll look to make a similar impact tonight when the two teams meet again on the Island.