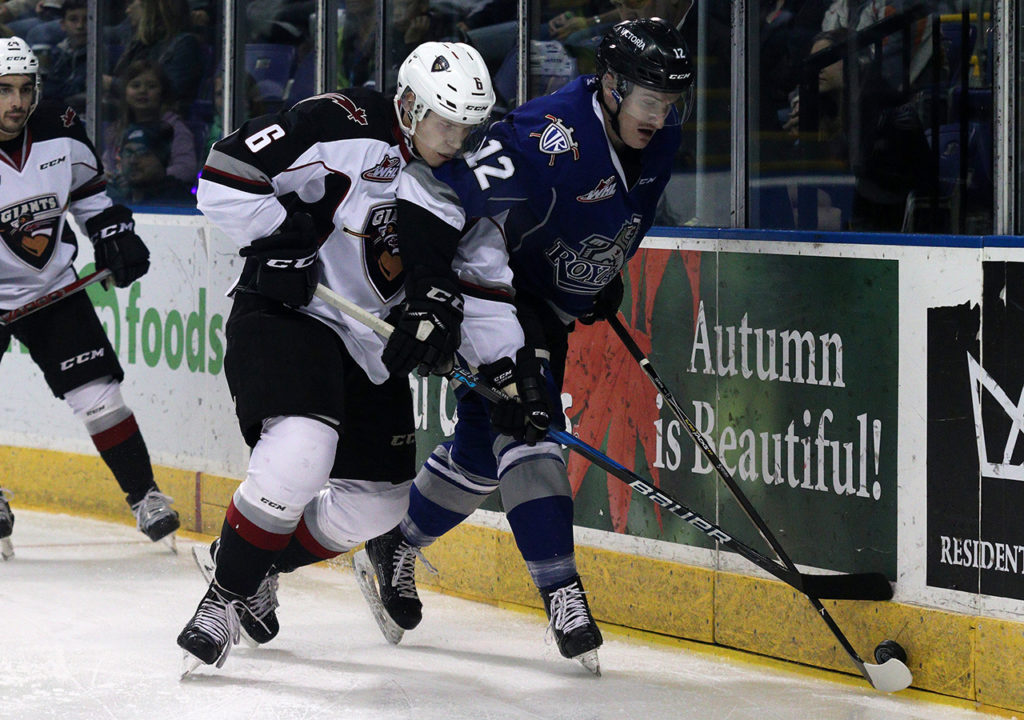 Tonight in Victoria, the Vancouver Giants will look to secure their fifth straight victory when they once again go head-to-head with the Victoria Royals. Last night the Giants were full marks in a 3-1 home victory against Victoria and are now winners of six of their last seven games. The season series between the two rivals now sits at 2-3-0-1 for the Giants who have defeated the Royals now in two straight meetings. The Royals on the other hand have dropped two straight, but they are one of the most dominant home teams in the entire WHL. The B.C. Division leaders are going to give the Giants their very best in tonight’s rematch which sets the scene for a thrilling Saturday showdown in the provincial capital.

Noah Gregor: The newly acquired forward scored his first goal as a Royal in last night’s game and has recorded a point in each of his first two games in a Royals uniform. For the season he has 15 goals and 23 assists for 38 points.

Matthew Phillips: The dynamic 19-year-old has six goals and five assists for 11 points in six meetings with the Giants this season. Last night he was held to a single assist, but was his usual effective self in the offensive zone. Keeping him in check tonight will once again be a big key for the Giants.

Chaz Reddekopp: The towering 20-year-old plays a solid two-way game for the Royals and has snagged four goals to go along with his 12 assists (16 points overall) so far this season. With the Royals controlling the last line change tonight, Reddekopp will likely see a bulk of the tough defensive minutes for the Royals against the likes of Ty Ronning and Tyler Benson.

Jared Freadrich: The 19-year-old continues to lead the charge offensively for Victoria from the back-end. He has eight goals which leads all Royals defencemen in that regard and it’s also a new single season high for him in that regard.

Griffen Outhouse: In five starts against the Giants this season, Outhouse has put together a record of 3-2 with a 2.68 goals-against-average and a .932 save percentage. Last night Outhouse surrendered three goals against on 37 shots faced and played a strong game despite the loss. He’s a work horse for the Royals and barring injury he’ll almost assuredly slot back into the net tonight for the Royals at home.

Tyler Soy: The Anaheim Ducks prospect has 13 goals and 25 assists for 38 points and has two goals and four assists (for six points) in his past four games. For the season, Soy is averaging 1.27 points-per-game which is second only to Matthew Phillips (1.46) on the entire team.

Jared Dmytriw: The former Victoria Royal picked the perfect time to break out for Vancouver. The 19-year-old had a goal, an assist and was named the game’s first star in last night’s victory. The goal for Dmytriw snapped an 11-game goal scoring drought, and hopefully he’s more a few more up his sleeve in the upcoming games for Vancouver.

Tyler Benson: The Giants captain has been the epitome of consistency this season for his team. Last night he had a goal and an assist and has now logged 11 multi-point games this season and has seven over the span of his last 11 games altogether. Through 20 games he has 13 goals and 18 assists for 31 points which puts him tied for third on the team.

Darian Skeoch: The 20-year-old scored his first goal of the season last night in the victory and his goal stood as the game winner. Defensively Skeoch has done so many big things for this team this season and you could argue that nobody was more deserving of a goal than big number 28. Tonight he’ll be tasked with playing some tough minutes defensively again, but a game like last night’s should only further improve his confidence moving forward.

Alex Kannok Leipert: The 17-year-old rookie hasn’t received a ton of fanfare this season, but all the while he has quietly and consistently played great hockey for the Giants. His goal and 13 assists give him 14 points on the season which puts him third in rookie scoring among WHL defencemen. His +10 rating is the second best on the team behind only Ty Ronning.

Todd Scott: With three games iin three nights, Todd Scott will get the nod tonight for the Giants as they pursue their fifth straight win. Scott’s last game was back on December 2nd in Prince George, and he didn’t have a ton of help in what ended up as a 6-2 loss to the Cougars. For the season, Scott is 5-7-2-1 with a 4.10 goals-against-average and an .875 save percentage. Watching his counterpart David Tendeck experience success lately though should serve as some inspiration for Scott. He’s played great games this season, and boy could the Giants use a strong showing from their rookie tonight as they look to hand the Royals just their fourth regulation loss at home.

Stay the Course: The Giants played arguably their best/most complete game of the season last night and showed yet again that when they bring their best, they can hang with the very best that the WHL has to offer. Tonight on the road will be tough, particularly given that the Royals are 11-3-1-0 at home and are coming off two-straight losses. But if the Giants can play to their strengths and not get caught up in what the Royals are trying to do, they’re going to give themselves every opportunity to be successful tonight on the Island.