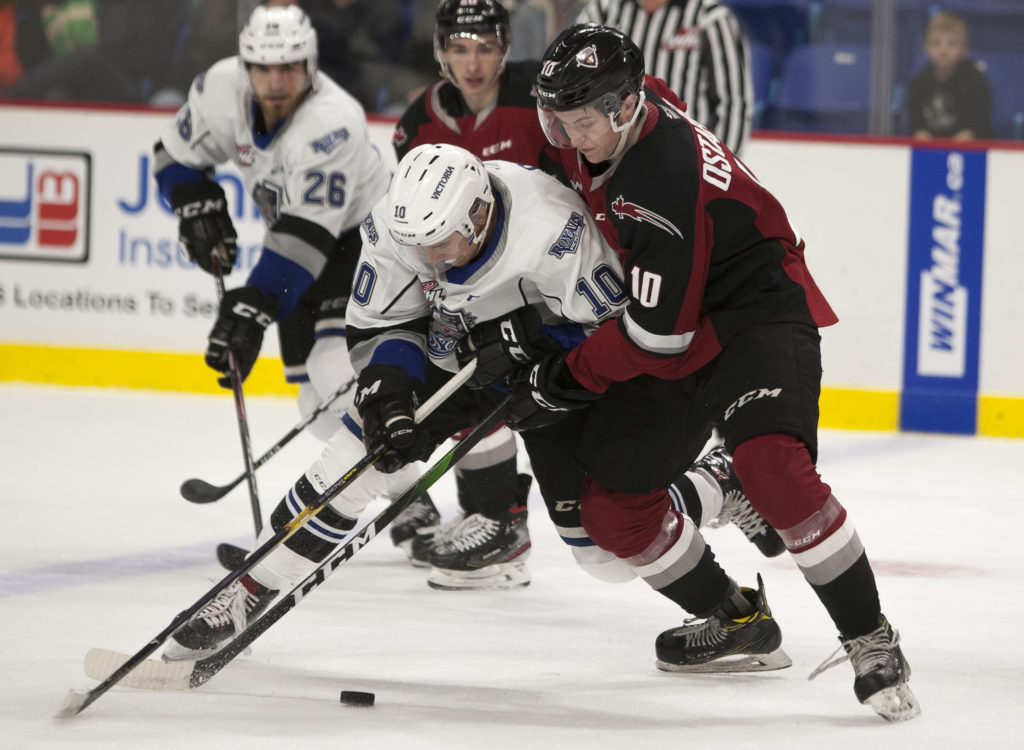 Tonight in Victoria the Vancouver Giants and Victoria Royals rekindle their rivalry when they get together for the second time this season. With 42 games remaining in their season, the Giants will still face the Royals nine times (including tonight). These two teams have met in each of the previous two postseasons, with the Royals and Giants each winning once. Both teams come into tonight’s game with 28 points on the season.

Last Game: A 4-3 overtime loss on Saturday night in Spokane.

The Victoria Royals have received stellar goaltending for much of the season courtesy of 20-year-old Shane Farkas and 18-year-old Brock Gould. Farkas is 9-4-1-0 this season with a 2.79 goals-against-average and a .910 save percentage. For his career, Farkas is 5-0 against the Vancouver Giants. Last season with Portland he went 4-0 against the Giants with a 1.74 goals-against-average and a .929 save percentage. Gould is 1-2-1-0 in four career games against the Giants.

2001-born forward Tarun Fizer leads all Royals skaters with nine goals and 11 assists for 20 points through 23 games. The product of Chestermere, Alberta has a four-game point streak on his hands, and has compiled two goals and five assists for seven points in that span. For his career, Fizer has suited up in 136 games with the Royals and has registered 24 goals and 37 assists for 61 points. He’s only 15 points shy of surpassing his point totals from last season.

Last Game: A 5-1 loss on Saturday in Kennewick, WA

Earlier this week, Giants defenceman Bowen Byram was one of 31 players selected to Canada’s World Junior Selection Camp which runs from December 9th – 12th in Oakville, ON. Byram was one of 10 defencemen and eight WHL’ers named to the camp. So far this season Byram has notched three goals and 14 assists for 17 points in 24 games with the Giants this season. Last season against the Royals, Byram posted three goals and five assists for eight points in 10 games.

THE STREAK CONTINUES FOR NIELSEN:

2000-born forward Tristen Nielsen brings a three-game goal scoring streak into tonight’s game with Victoria. Over his past three games, Nielsen has scored four goals along with two assists for six points. Going back a span of six games, he’s registered five goals and four assists for nine points. He leads the Giants with 14 goals and 26 points and is currently the only Giant player clicking at a point-per-game.