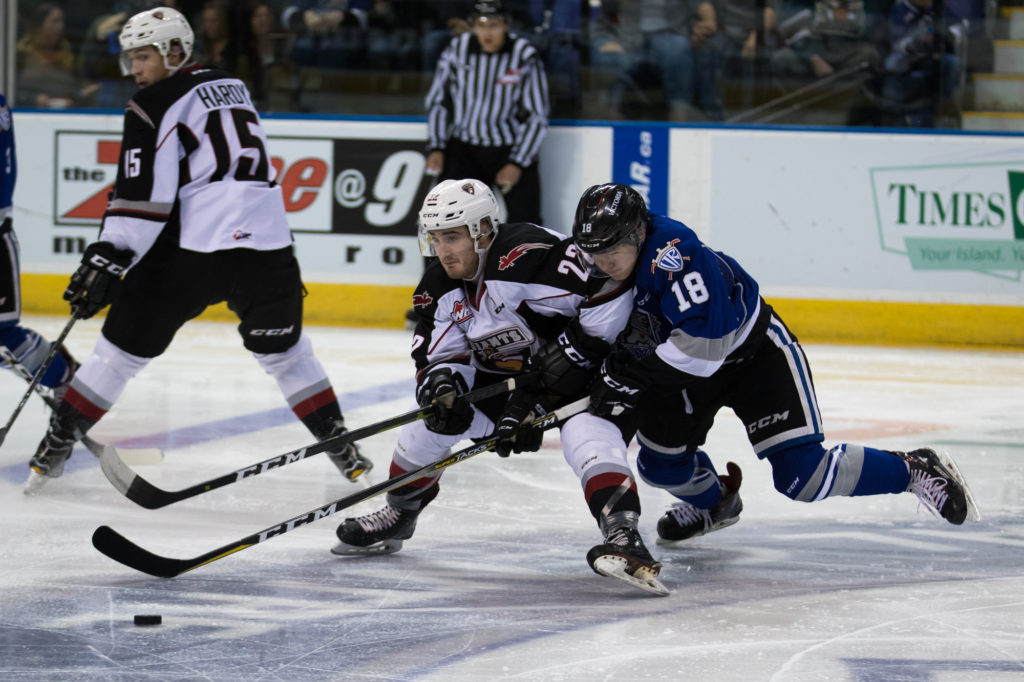 This afternoon in Victoria, the Vancouver Giants and Victoria Royals clash for the second time in as many days. Last night the Giants earned a single point in a 3-2 overtime loss to the Royals and today once again they’ll look to hand the Royals their first loss of 2018-19.

Kaid Oliver: The 18-year-old White Rock native led all Royals with two goals and an assist in last night’s game. His second goal came with 25 seconds remaining in overtime. He leads all Royals skaters with nine points. He’s recorded at least one point in six straight games.

D-Jay Jerome: The 1999-born Lethbridge, AB native chipped in with two assists in last night’s victory for Victoria and now has three goals and four assists for seven points through seven games. Jerome’s previous season high for points was eight, but based on his early play he’s going to smash those previous totals in 2018-19.

Ralph Jarratt: The 20-year-old played big minutes in all situations yesterday for Victoria and today should be no different. Jarratt earned an assist on Oliver’s overtime winning goal and has posted a goal and six assists for seven points through five games so far to lead all Royals blueliners.

Scott Walford: The Montreal Canadiens prospect did not factor into the scoring last night, but defensively he provided reliable minutes for his team in all situations. After missing the first two games of the season for the Royals, Walford has chipped in with two assists through five games and is a +2 in that span.

Griffen Outhouse: The 20-year-old was named the first star in yesterday’s game and deservedly so. He stopped 26 of the 28 shots he faced to earn his seventh victory of the season and his 19th career victory against the Vancouver Giants. For the season he’s compiled a 1.85 goals-against-average and a .944 save percentage.

Dante Hannoun: Hannoun made his presence felt last night when it mattered most. The 20-year-old Delta native notched the first assist on the overtime winner, and finished the night with a +1 rating. Hannoun’s skill is rivalled by his relentless work ethic. He’s now earned 37 points in 37 career games against Vancouver.

Milos Roman: The Calgary Flames prospect has scored in three straight games and also brings a six-game point streak into this afternoon’s contest. Roman had the game-tying goal last night early in the third period on the power play.

Davis Koch: The 20-year-old Surrey native recorded two assists in last night’s game and now has two goals and five assists for seven points on the campaign. Koch scored a big goal for the Giants on Friday at home in their win over Kamloops. His seven points put him tied for third in team scoring.

Alex Kannok Leipert: The Washington Capitals prospect has been solid through the first nine games of the season. He’s registered two assists, a +2 rating and 12 penalty minutes. He’s come close to scoring a few times in recent weeks which means he’s due for a breakout game offensively.

Bowen Byram: Today the G-Men will once again look to Bowen Byram to provide major minutes in all situations. The 2019 draft eligible d-man has two goals and three assists for five points so far this season along with a +3 rating. His five points are tops on the team for defencemen.

David Tendeck: The Arizona Coyotes prospect will make his third start in as many days today in Victoria. So far this weekend, Tendeck has been strong stopping 47 of the 53 shots he’s faced. His overall record for the season is 5-1-1-0 with a .925 save percentage and a 1.95 goals-against-average.

Discipline: The Giants had to kill of five penalties in last night’s game while the Royals had to kill off two. Given that it’s their third game in as many days, the Giants will look to play as much of today’s game at five-on-five or better. Energy management will be a big-time key for them today.