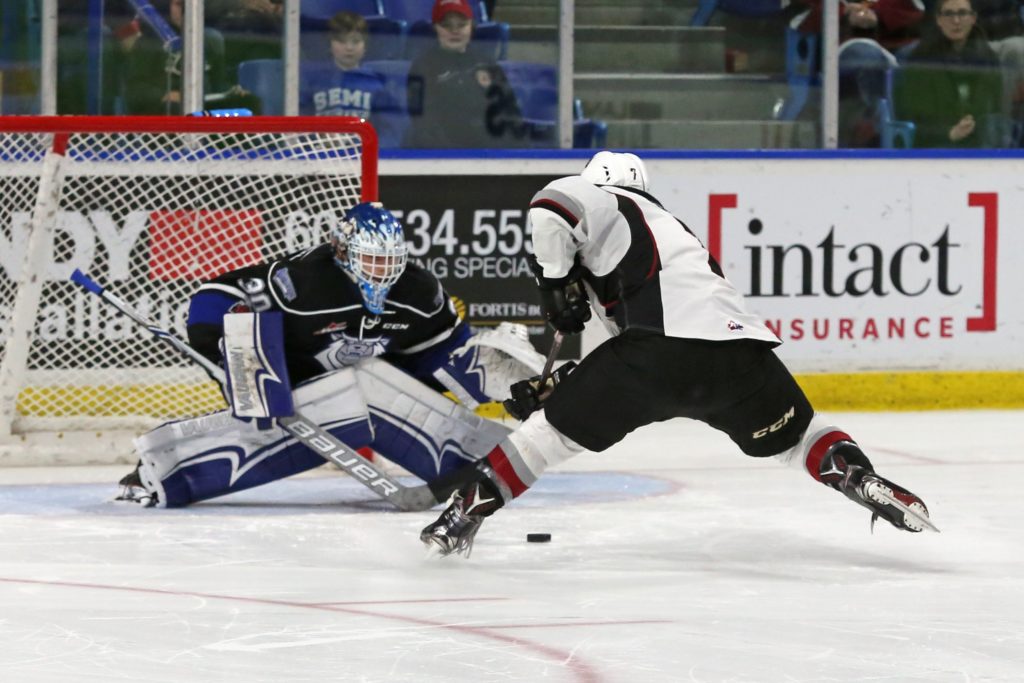 It’s here. Game 1 of Round 1 of the 2017-18 WHL Playoffs has arrived and for the Vancouver Giants it feels great to be back at the playoff dance for the first time since 2013-14. Tonight in on Vancouver Island they’ll clash with their B.C. Division rivals and their closest geographical competitors, the Victoria Royals for the first time since the franchise relocated the Island back in 2011.

Matthew Phillips: The Calgary Flames prospect finished fifth in league scoring and tops among all Western Conference skaters. In 10 games against the Giants he had eight goals and 11 assists for 19 points.

Tyler Soy: The 20-year-old prospect of the Anaheim Ducks had three goals and five assists for eight points in eight meetings against the Giants in 2017-18. He finished second in team scoring with 92 points in just 66 games.

Chaz Reddekopp: The LA Kings prospect had seven goals and 24 assists for 31 points only 46 games played. He’s 6’4”, 227 pounds and is very difficult to play against. He should see a bulk of the minutes against the Giants top scorers.

Griffen Outhouse: In nine appearances against the Giants, Griffen Outhouse was 6-3 with a 3.01 goals-against-average and a .918 save percentage. He appeared in 60 of the Royals 72 games, one shy of the most appearances by any goalie in the WHL. He was 35-17-4-1 this season with two shutouts, a 3.08 goals-against-average and a .912 save percentage.

Tanner Kaspick: The St. Louis Blues prospect helped the Wheat Kings to a league championship during the 2015-16 season. He finished the season with 64 points in 60 games and had 27 points in 25 games with the Victoria Royals. He’s fast, he’s physical and he’s been here before.

Ty Ronning: 10 of Ty Ronning’s 61 goals came against the Victoria Royals. The 20-year-old signed prospect of the New York Rangers will be playing in his first playoff series since the 2013-14 season. He led all Giants with 12 points in 10 games against the Royals.

Tyler Benson: The Giants captain had three goals and six assists for nine points in seven games against the Royals. Benson finished second in team scoring with 27 goals and 42 assists for 69 points in just 58 games. He’s never played a WHL playoff game.

Dylan Plouffe: In nine games against the Royals, the Giants Defenceman Of the Year potted three goals and five assists for eight total points. This also marks his firs tever WHL playoff experience, and he’ll no doubt log some big minutes against some of the Royals top forwards.

Matt Barberis: The 19-year-old dressed in one playoff game for the Giants back in 2013-14. He finished the season with two goals and six assists for eight points in nine games against the Royals and was a +5 against them.

Trent Miner?: With David Tendeck’s status still up in the air it appears as though rookie Trent Miner will start Game 1 of the series for Vancouver. Miner went 3-4 during the regular season and went 0-1 against the Royals. His one game against them was impressive as he stopped 38 of the 42 shots fired his way on February 17th in Victoria.

James Malm: With three goals and six assists for nine points in 10 games against the Royals, the Giants are going to count on James Malm to produce offense. The 18-year-old has never played in a WHL playoff game but will no doubt be excited to get some valuable experience under his belt.