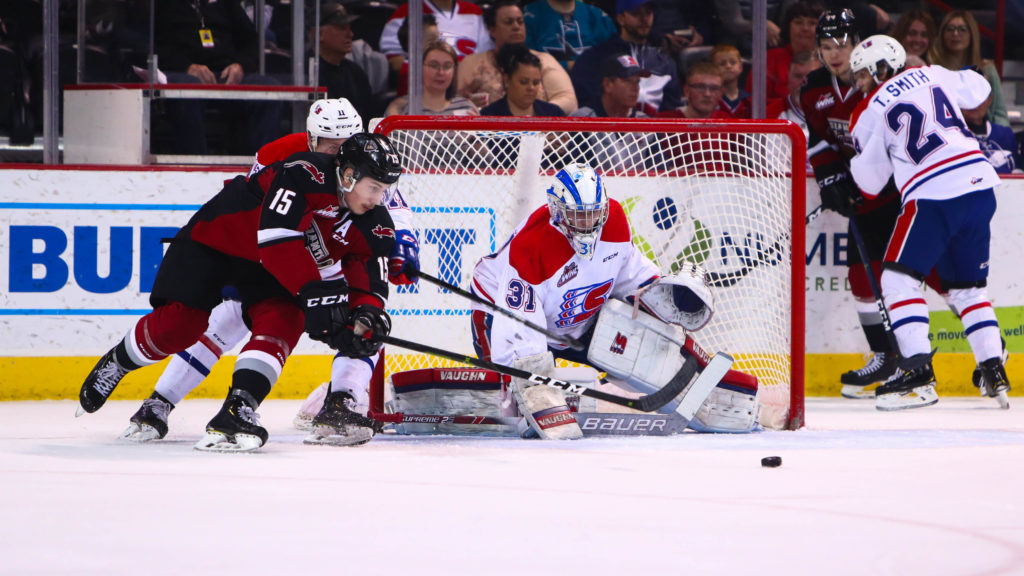 We’ve got ourselves a series. The Vancouver Giants dropped a 3-2 decision in overtime last night to the Spokane Chiefs and now the stakes have heightened even more for tonight’s Game 4. A win for the Giants and they’d have a 3-1 stranglehold on the series with Game 5 set for Friday night at home. A win for the Chiefs and the best-of-seven series becomes a best-of-three with each team holding serve on home ice.

THE BOOK OF ELI:

2000-born forward Eli Zummack made his presence felt in a big way in Game 3. He led the Chiefs with a goal and an assist and was named the game’s second star for his efforts. For the playoffs he’s now recorded four goals and seven assists for 11 points and sits just one point shy of Riley Woods for the team lead. During the regular season he posted 68 points through 61 games. He was originally selected 36th overall by Red Deer in the 2015 WHL Bantam Draft.

2001-born forward Luke Toporowski recorded a goal, an assist and a fight in last night’s game to record the Gordie Howe hat-trick for the Chiefs. His six goals have him tied for first on the team with Riley Woods for the team lead in that category. Toporowski is eligible for the 2019 NHL Draft and most recently was ranked #100 on NHL Central Scouting’s Final Rankings List.

Giants captain Jared Dmytriw continues to play his best hockey as the Giants go deeper into the playoffs. Last night he notched his seventh goal of the playoffs and now over the course of five games he’s scored five goals along with three assists for eight points. He and his linemates Owen Hardy and Dawson Holt have logged mega minutes for the Giants in all situations and tonight they will once again be looked upon to lead the way for the Giants as they look to become the first road team of the series to get a win.

It hasn’t been the easiest playoff stretch for 16-year-old Justin Sourdif who missed five games of Round 1 after suffering an upper-body injury. But now that we’re into the nitty-gritty of Round 3 there are signs that his game is starting to round into form. Sourdif scored his first goal of the playoffs last night off the rush and he and his linemates Brayden Watts and Milos Roman played one of their best games in recent memory. Sourdif brings a lot to the table and is only going to get better. Tonight he’ll look to build on a solid Game 3.