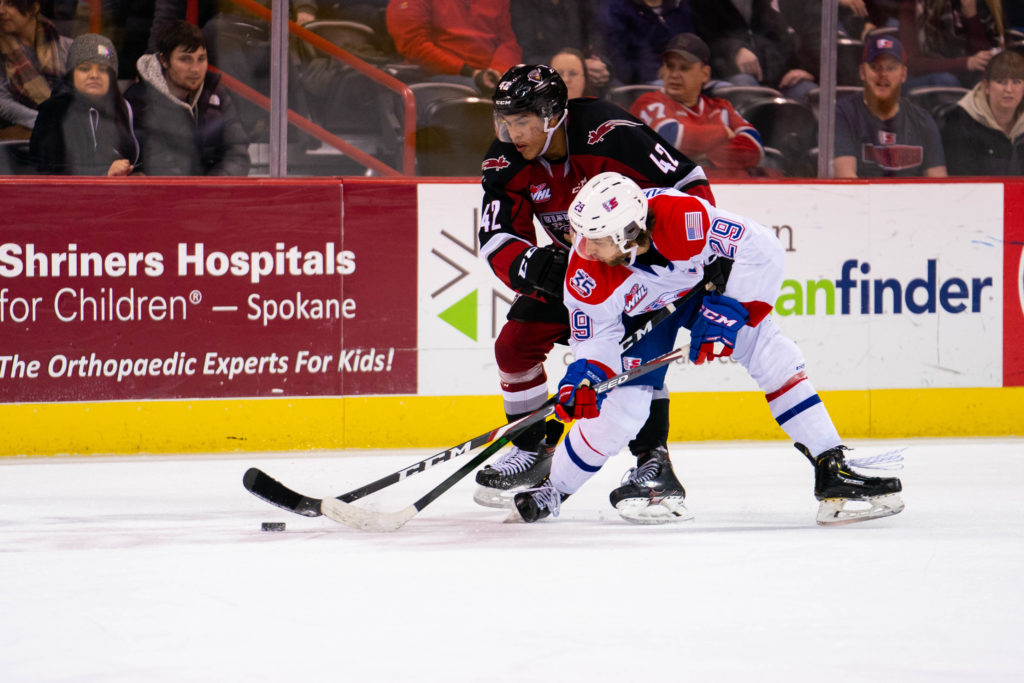 Tonight in Spokane the Vancouver Giants wrap up their three-game journey through the USA when they clash with the Spokane Chiefs for the first time this season. The Giants are 2-0 so far on the trip having earned wins in Portland (3-2 in OT) Wednesday and Kennewick (3-1) last night. Tonight they’ll battle a Spokane team that’s earned points in each of their past two games.

Last night in Kelowna the Spokane Chiefs grabbed a single point in a 2-1 shootout loss to the Rockets. Goaltender Mason Beaupit stopped 36 of 37 shots fired his way and was named the game’s third star. Offensively the Chiefs received a goal from Washington Capitals prospect Bear Hughes. The single point for Spokane moved them into sole possession of eighth place in the Western Conference standings.

‘TOP’ OF THE PILE

After missing the past two games with a suspension, Chiefs top scorer Luke Toporowski will return to the Chiefs lineup tonight. Toporowski leads the Chiefs in both goals (7) and points 15. Two seasons ago, Toporowski had three assists in four meetings against the Giants and for his entire WHL career he’s registered 68 goals and 83 assists for 151 points – Not bad for the eighth overall pick from the 2016 WHL Prospects Draft.

Last Game: A 3-1 win in the Tri-Cities last night.

THE STORY SO FAR

Tonight in Spokane the Vancouver Giants and Spokane Chiefs will square off for the first time since January 11, 2020. A win for the Giants tonight would give them their third consecutive road victory. So far on this road trip the Giants have earned victories against both Portland and Tri-City. On Wednesday in Portland the Giants earned a 3-2 overtime victory on the strength of 41 saves from Jesper Vikman. Then last night in Tri-City the Giants scored three unanswered goals en route to a 3-1 win over the Tri-City Americans.

ANOTHER LEVEL FOR SOURDIF

Giants captain Justin Sourdif continues to impress during his 19-year-old season in the WHL. The Surrey product comes into tonight’s game leading the Giants with 23 points and his eight goals are tied with Adam Hall for top spot as well. In his past four games, Sourdif has managed three goals and three assists for six points. He earned first star honours last night thanks to his strong two-way game against Tri-City and with each passing game he continues to show why he deserves a spot on Canada’s World Junior team in 2021-2022.