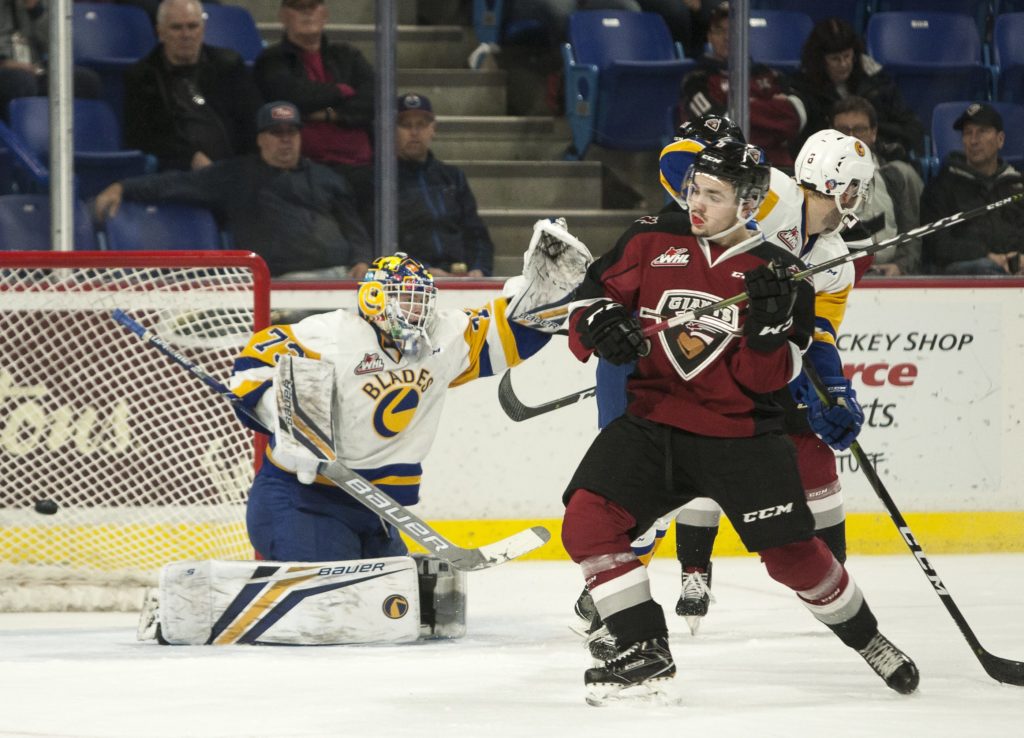 Tonight in Saskatoon, the Vancouver Giants take the ice for Game #4 of their six-game swing through the East. So far on the trip the Giants are 1-2 and are coming off a heart-breaking 4-2 loss last night in Prince Albert. The Blades meanwhile are 2-0-0-1 in their last three, and are looking to step over the .500 mark with a win on home ice. The Giants will look for their fourth win against the Blades in the past five seasons.

Last Game: A 5-4 shootout loss at home Sunday against the Brandon Wheat Kings.

So far, so good for the former Victoria Scott Walford who has recorded seven points in his first seven games with the Saskatoon Blades. The Coquitlam native played 229 career regular season games and 24 playoff games with the Victoria Royals before being traded to the Blades prior to this season. The Giants can expect a steady diet of #6 tonight.

17-year-old Kyle Crnkovic is off to a strong start in his second season in the WHL. The 10th overall pick from 2017 has already struck for four goals and sits second on the team in scoring with six points. Last season he posted 11 goals to go with 20 assists for 31 points.

Nolan Maier was one of the may goalies to go in the opening rounds of the 2016 WHL Bantam Draft. The product of Yorkton, SK had a great season last year with a 36-10-6-0 record with four shutouts and a 2.64 goals-against-average. So far this season, Maier has gone 2-3-0-1 with a .905 save percentage and 2.76 goals-against-average. To the surprise of many, Maier went undrafted in the 2019 NHL Draft, but that doesn’t mean his name won’t get called this year.

Last Game: A 4-2 loss last night to Prince Albert on the road.

Seth Bafaro played 85 games in a Blades uniform before being dealt to the Vancouver Giants near the 2019 Trading Deadline. Bafaro has fit right in with the Giants, and comes into tonight’s game ranked second in team scoring with seven points through the first eight games. Bafaro also comes in with a +2 rating and 17 penalty minutes.

2020 NHL Draft prospect Justin Sourdif scored his fifth goal of the season last night, and comes into tonight’s game with a team-leading 10 points. Sourdif’s five goals are tied with Milos Roman for the team lead. His +8 is also tops on the team. He’s recorded points in seven of his first eight games this season.

This road trip has provided ample opportunity for some young Giants forwards to get their feet wet in the WHL. Last Saturday in Winnipeg, Justin Lies buried his first career WHL goal. On that same play, rookie forward Zack Ostapchuk notched his first WHL assist. Jacob Gendron grabbed his first WHL point in that same game, while 17-year-old forward/defenceman Tanner Brown grabbed an assist last night. With each game comes more confidence for some of these young future stalwarts of the Vancouver Giants.