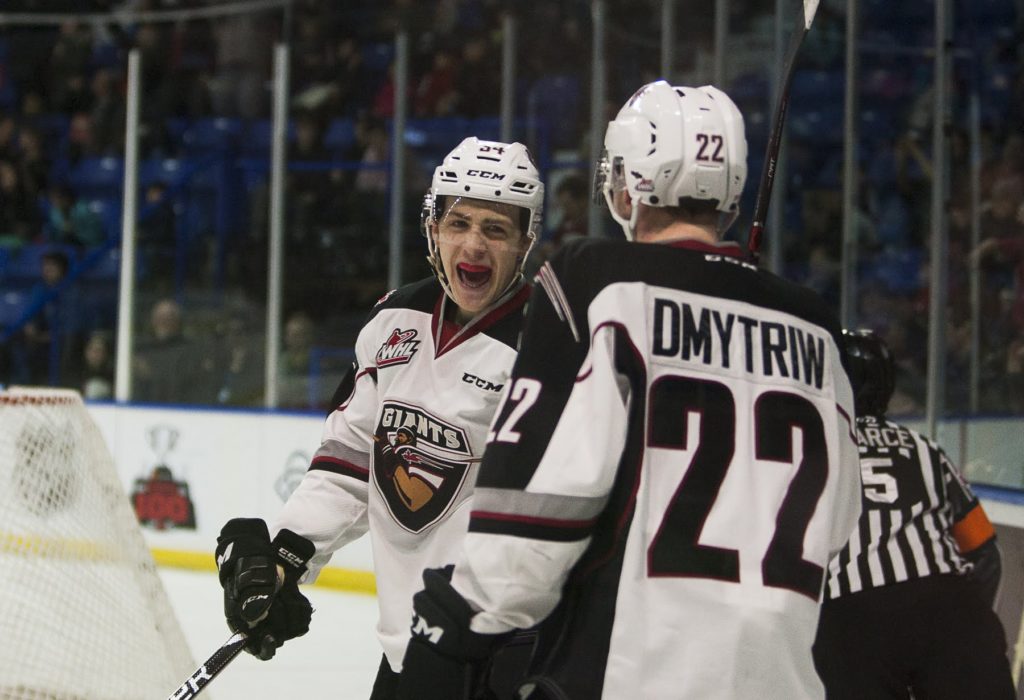 Tonight in Prince George, the Vancouver Giants wrap up their three-game swing through the B.C. Division when they once again battle the Prince George Cougars. Last night the Giants struck three times in a 3:53 span of the third period en route to a 3-0 road victory over the Cougars to keep their road unbeaten streak alive. Tonight they take aim at the weekend sweep.

Tyson Upper: The 2001-born rookie was named the game’s third star after he put forth a strong two-way performance. Upper had several good looks and chances to score, so his first career WHL goal should not be too far away. During five pre-season games, Upper had four goals and two helpers for Prince George.

Josh Maser: The 1999-born forward had one of the Cougars best chances to score last night late in the second period off a re-direction. Maser led the Cougars in goals last season with 28, and had five goals against Vancouver during the 2017-18 season.

Joel Lakusta: The 20-year-old had an awesome game last night for the Cougars, albeit in defeat. He logged a ton of minutes in all situations and was especially threatening on each of the Cougars two power play chances. He had nine goals and 43 points a season ago, and there’s zero reason why he can’t get there again.

Rhett Rhinehart: The 17-year-old played a strong, two-way, physical game last night for the Prince George Cougars. Acquired in a trade deadline deal with Prince Albert back in January, Rhinehart struck three times last season, and has posted one assist through six games. He’s not eligible for the NHL draft until 2020, which gives him this season and the next one to impress the NHL scouts.

Taylor Gauthier?: The 17-year-old was solid last night for the Cougars and gave them every opportunity possible to win. He stopped 22 of the 25 shots he faced, and right on par with fellow southpaw David Tendeck through two-plus periods. Should Gauthier get the start again tonight, he’ll once again give the Cougars a great chance to win.

Ethan Browne: The talented forward was named the Prince George Cougar’s player of the month for September after he posted two goals and two assists for four points through five September games. There’s no denying his skill, as he had a few good looks at the Vancouver net last night.

James Malm: The 19-year-old extended his point-streak to four games last night with an assist on Owen Hardy’s game winning goal in the third period. For the season, Malm has seven goals and two assists for nine points to lead the team. His seven goals remains the top total in the WHL.

Justin Sourdif: The 16-year-old notched his second career goal in last night’s win. That goal served as the insurance marker and gave the Giants a bit of breathing room en route to their victory. Sourdif has two goals and two assists for the season.

Dylan Plouffe: The 19-year-old added another +1 to his rating last night, and now sits tied for first in the WHL with a +8 rating. Plouffe has chipped in offensively with four assists through six games and has done so while logging tough defensive minutes against the opposing team’s top players. He had seven assists last season against Prince George.

Ty Ettinger: The young defenceman has looked right at home early on with the Vancouver Giants. Less than a week after being acquired by the Giants in a trade, Ettinger has made a positive impact in each of his first two games. His diving defensive play at one end helped set up the Giants game winning goal at the other end.

Trent Miner: Fresh off a 21 save shutout Wednesday against Kelowna, Trent Miner will take to the net tonight looking for his second victory on the young season. He and David Tendeck have formed a terrific goaltending combination early on in 2018-19, and he’ll look to continue that wave of goaltending success tonight for Vancouver when he battles the Cougars.

Special Teams: Last night the Giants won the special teams battle, and thus they won the game. The power play went one-for-three and the penalty kill was a perfect two-for-two. The power play has now scored in each of its past two games and has gone three-for-its-last eight. Another strong special teams outing would go a long way for the Giants in their pursuit of their fourth straight road victory.