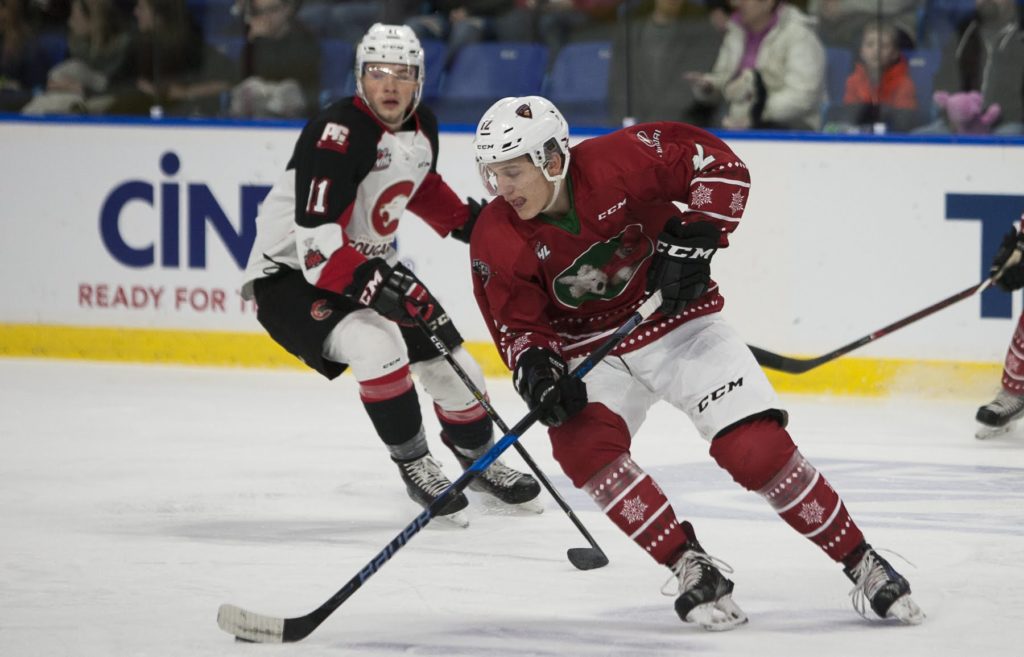 The 2018 WHL Trade Deadline has come and gone and the Vancouver Giants will have a marginally different look to them for the duration of the season. Glen Hanlon pulled the trigger on a major deal earlier today when he acquired 1998-born forward Davis Koch from the Edmonton Oil Kings in exchange for Brendan Semchuk, Todd Scott and a draft pick. Koch won’t play tonight as the Giants are up North in Prince George wrapping up a five-game, 10-day road trip with their eighth and final meeting of the season with the Prince George Cougars.

Jared Bethune: The 20-year-old has goals in three straight games and leads the Cougars outright in scoring with 39 points, 14 of which are goals. In seven meetings against the Giants he’s got three goals and six assists for nine points.

Aaron Boyd: The 20-year-old forward sits third in team scoring with seven goals and 17 assists for 24 points. He’s got a goal and three assists for four points in seven meetings with the Giants.

Ryan Schoettler: With captain Dennis Cholowski now on the move to Portland, much of the onus defensively will now fall onto the shoulders of 18-year-old Ryan Schoettler. The sophomore defenceman has posted three goals and seven assists for 10 points and is one of just four Cougars this season to have appeared in every single one of their games.

Joel Lakusta: With four goals and 16 assists, Lakusta now leads all Cougars defenceman in scoring and now with his experience level becomes the defacto leader for this team on the back-end. He’ll be tasked with shutting down the Giants top forwards tonight in a shut-down role while still contributing to the team on the power play and in the offensive zone.

Taylor Gauthier: The 16-year-old came into yesterday’s game in relief and went a perfect nine-for-nine in saves. Will that be enough to give him the nod tonight? For the season the ninth overall pick in 2016 is 4-7-1-1 with a 3.31 goals-against-average and an .891 save percentage.

Jackson Leppard: With several key veteran players moved out of town in recent deals, the opportunity for Jackson Leppard is huge. The eighth overall pick from 2015 has nine goals and 11 assists for 20 points and leads the team in plus-minus with a +5 rating. Look for him to continue to pile on the points down the stretch of the season as he’ll receive a ton of power play time on most nights.

James Malm: The 18-year-old has very quietly put together a seven-game point streak. During that span he’s scored three goals along with seven assists for 10 points. His plus-minus is a team-high +11.

Dawson Holt: Over his past two games Holt has three goals and two assists for five points and is also a +7 in that span. Holt was named the second star in last night’s game after being named the first star last Saturday in Medicine Hat.

Kaleb Bulych: The rookie defenceman scored his first WHL goal in last night’s game against the Cougars. For the season the right-handed shooting blueliner has a goal and five assists. He’s going to be a big part of the Giants future success and confidence-wise it’s great to see him getting on the scoresheet.

Matt Barberis: The 19-year-old assisted on the Giants power play marker last night and now has three goals and 20 assists for 23 points which ranks him second on the team in scoring amongst defencemen.

David Tendeck: With Todd Scott traded earlier today to Edmonton, that signals that David Tendeck is the unquestioned number one goaltender for the Vancouver Giants moving forward. Tendeck’s record is 16-7-0-1 with a 2.94 goals-against-average and a .911 save percentage with two shutouts. He was victorious last night making 21 saves on 22 shots faced.

Ty Ronning/Tyler Benson: The two top guns for the Giants were held off the score sheet last night in Prince George. What’s impressive is that the Giants scored five goals without them. These two aren’t used to being kept off the scoresheet, so logic and history would suggest that both would be primed for a strong bounce-back effort here tonight.