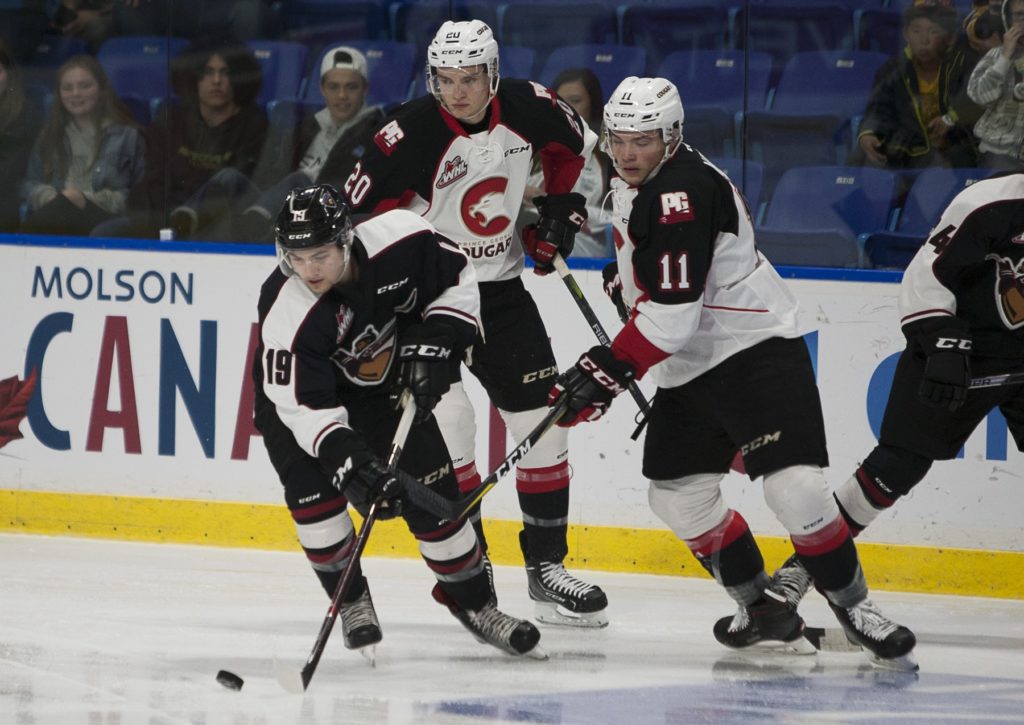 Tonight at the CN Centre, the Vancouver Giants look to turn a good week into an excellent one when they once again clash with the Prince George Cougars. Following a 4-3 overtime win at home Tuesday the Giants earned a 5-3 road victory last night over the Cougars. The regulation victory for Vancouver coupled with losses from Kamloops and Prince George gives them a four-point cushion on Kamloops and a six-point edge on Prince George for a top three playoff spot in the B.C. Division standings. Another win tonight and a little bit of help would really set up the Giants nicely heading into a busy stretch of December games.

Jared Bethune: The 20-year-old scored the Cougars first goal of the game last night and has now recorded goals in back-to-back games. For the season he’s posted eight goals to go along with 15 assists for 23 points which ranks him third on the team.

Brogan O’Brien: Fellow 20-year-old Brogan O’Brien played a strong two-way game last night for the Cougars and earned an assist for his efforts. He comes into tonight’s game with nine goals and nine assists for 18 points through 26 games.

Josh Anderson: The Colorado Avalanche prospect scored a late goal in the second period for Prince George which made the game 4-2, providing the Cougars with a shot of life in the process. Anderson logs heavy minutes for the Cougars, and often finds himself tasked with shutting down the opposing team’s top players. Tonight should be no exception.

Ryan Schoettler: 18-year-old Ryan Schoettler might be one of the more underrated defencemen in the Western Conference. Offensively he’s posted a goal and six assists for seven points and his +7 rating is tops among all Cougars defencemen. He plays most games paired alongside captain Dennis Cholowski and logs major minutes in all situations because of that.

Taylor Gauthier: 16-year-old Taylor Gauthier was drafted ninth overall by the Cougars back in the 2016 WHL Bantam Draft and so far has put together a strong rookie season between the pipes for PG. His record is 2-5-0-1 with a respectable 3.17 goals-against-average and an .887 save percentage.

Dennis Cholowski: The Cougars captain is a factor each time he takes the ice. It’s no wonder the Detroit Red Wings selected him 20th overall in the 2016 NHL Draft. Offensively he sits second in team scoring with eight goals and 15 assists for 23 points. He’s especially dangerous on the power play when he has time and space to either shoot the puck or find an open teammate. He should get strong consideration to represent Canada at the 2017-18 World Juniors.

Tyler Benson: The Giants captain and Edmonton Oilers prospect led all Giants with two goals and an assist in last night’s victory. For the season he has 11 goals and 13 assists for 24 points in 15 games. Over the course of his six-game point streak he’s managed seven goals and five assists for 12 points.

Milos Roman: The WHL’s leading rookie scorer was at it again last night posting a goal and an assist which gives him eight goals and 18 assists on the season. Roman and his linemates Brad Morrison and Ty Ronning have proven to be one of the most consistent and deadly lines in the Western Hockey League and they’ll look to continue that trend tonight.

Dylan Plouffe: The 18-year-old registered two assists in last night’s game and by doing so eclipsed his point totals from last season (4G, 17A). Plouffe comes into tonight’s game with four goals and 18 assists for 22 points and is a +3.

Alex Kannok Leipert: The 17-year-old rookie from Regina has done a little bit of everything this season for the G-Men. Through 28 games he’s scored once while adding 10 assists for 11 points and is a +5. He’s earned the trust of his coaching staff and teammates in all situations and right in front of our eyes is blossoming into a versatile, solid defender in the WHL.

Todd Scott: The rookie from Minnesota is coming off a 4-3 overtime victory at home Tuesday against the Seattle Thunderbirds. Three of his five victories this season have come on the road and tonight he’ll look to get his record back to .500 when he goes up against the Cougars. He faced them back on October 27th and played well despite falling 2-1 in that game.

Do. Not. Settle: The Giants have at worst guaranteed themselves a split this weekend in Prince George – Which is fine, but it’s by no means what their goal and outlook should be. Tonight the Giants need to go for the jugular. A win in regulation would put them eight points ahead of the Cougars in the B.C. Division standings – A decent amount of separation for this point of the season and a tough deficit for the Cougars to claw back from.