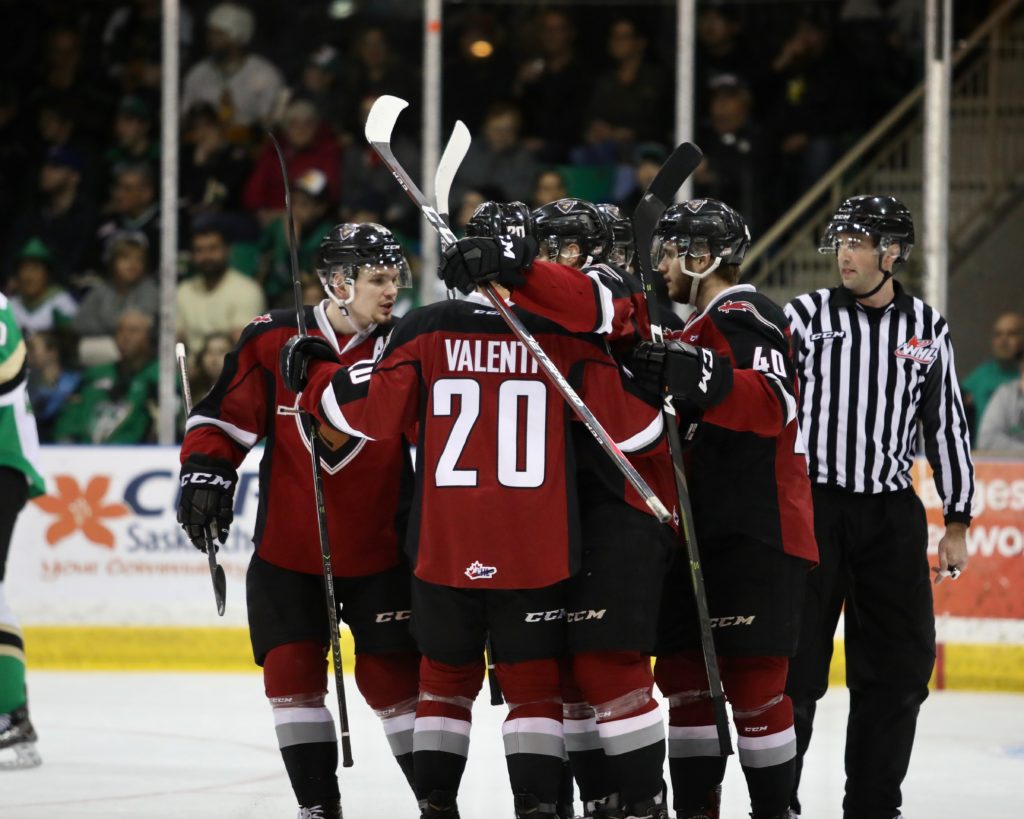 Tonight in Prince Albert, the Vancouver Giants look to extend their series lead to 2-0 when they once again take the ice against the Prince Albert Raiders in the Rogers WHL Championship Series. Last night the G-Men held on to earn a 5-4 victory and have now won Game 1 in each of the four playoff rounds to this point. The Giants never trailed in Game 1, and despite some valiant pushbacks from the Raiders, Michael Dyck’s crew dug their heels in and emerged victorious. A win tonight for Vancouver would give them a huge boost given the fact that Games 3, 4 and 5 will all be taking place back at the Langley Events Centre on Tuesday, Wednesday and Friday.

Last night the Raiders received a major offensive boost from a familiar foe to the Vancouver Giants, Dante Hannoun. The former Victoria Royal came into last night’s game with 51 career points in 50 career games (regular season and playoffs) against the Giants, and added a goal and an assist to that total to now give him 53 points through 51 games. Hannoun’s goal at 16:45 of the second period momentarily tied the game 3-3 and got the Art Hauser Centre rocking. Hannoun is tied for the team lead in playoff scoring with 17 points in 17 games.

20-year-old San Jose Sharks prospect Noah Gregor has a knack for big goals, and last night was no exception. After posting 43 goals during the regular season along with his 45 assists (88 total points), Greg buried his eighth goal of the playoffs last night. It was the 3-2 goal for the Raiders that moved them back within one. Last season as a member of the Victoria Royals, Gregor had four goals and six assists for 10 points in seven games against the Vancouver Giants, and he’s carried over much of that playoff success into this season with the Raiders. He’s scored four goals over the course of his past six games.

Bowen Byram led all scorers last night with four assists and now leads the WHL playoffs in scoring outright with 22 points (7G, 15A). Over his past three games, Byram has two goals and six assists for eight points. He’s also done a lot of damage on the power play as nine of his 22 points have come via the man advantage. Dating back to 1996 there hasn’t been a single defenceman to lead the WHL playoffs in scoring.

Last night in Prince Albert, Dawson Holt continued his strong playoff with a two-goal effort. Holt now leads the Giants with three game winning goals during the playoffs and has compiled five multi-point games out of 16 games played so far. Holt and his linemates Jared Dmytriw and Owen Hardy combined for three goals and three assists for six points last night, and were a combined +9. They continue to be a major positive factor for the Vancouver Giants during the 2019 playoffs and they’ll look to do so tonight once again.