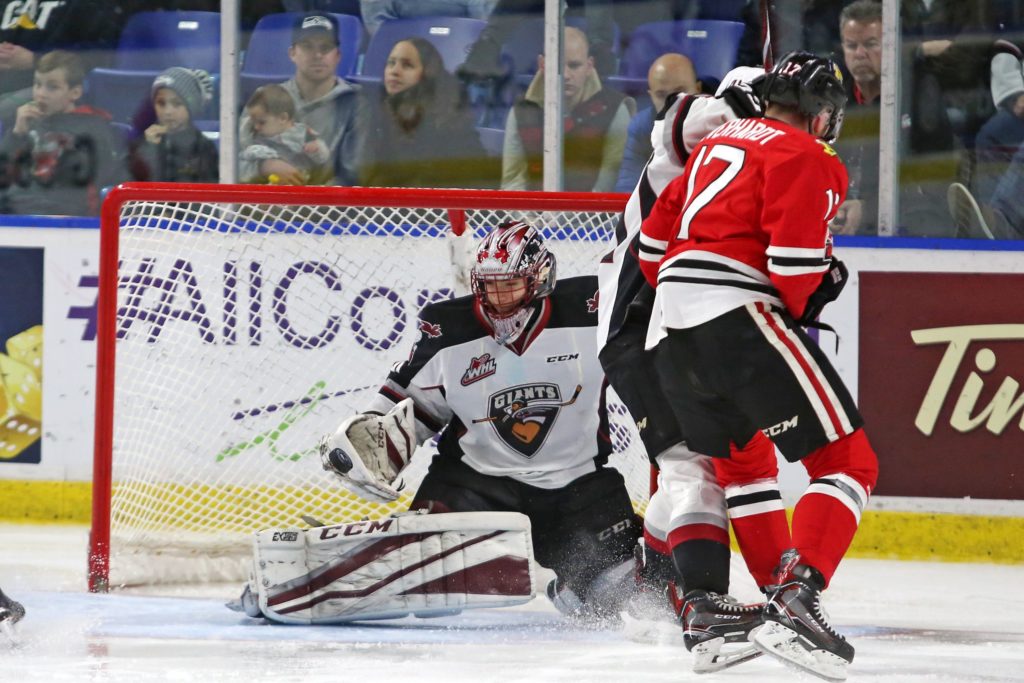 Tonight in Portland, the Vancouver Giants begin a very busy stretch of four games in a span of five nights when they take on the Portland Winterhawks for the fourth and final time during the regular season. So far the G-Men are 3-2 in February and are 2-1 against Portland having defeated them twice back in early December. Heading into tonight the Giants are six points back of Victoria for second in the B.C. Division and 10 points ahead of Kamloops for third.

Last Game: A 5-3 win at home Sunday over Seattle

Cody Glass: The first ever draft pick from the Vegas Golden Knights is having another terrific season for the Winterhawks. Through 49 games, Glass has 27 goals along with 47 assists to share the team lead in scoring with 74 points. He has points in 10 of his last 11 games and during that span he’s notched four goals and 11 assists for 15 points.

Kieffer Bellows: The World Junior silver medalist with Team USA is enjoying a strong first season in the WHL with Portland. Bellows sits second on the team in goals with 29 and ranks third on the team in points behind his linemates Skyler McKenzie and Cody Glass.

Henri Jokiharju: The first round pick of the Chicago Blackhawks in 2017 leads all Portland defencemen in scoring with 55 points in 48 games played. He’s ranked fourth in the WHL in scoring among defencemen and is tied with Cody Glass for the team lead in assists with 47. His +32 ranking is tops among Western Conference skaters.

Dennis Cholowski: The Detroit Red Wings first rounder has five goals and six assists for 11 points in seven games played this season against Vancouver. The former Cougar captain has notched a goal and 14 assists for 15 points in 17 games played in a Winterhawks uniform since a Trade Deadline Day deal.

Cole Kehler: The 20-year-old has had a fine final season in the league. His record is 26-13-1-3 with three shutouts, a .911 save percentage and a 2.77 goals against average which ranks second in the league only behind Everett’s Carter Hart. Kehler is 0-2 against the Giants in two meetings in 2017-18.

Depth: The Portland Winterhawks are as offensively loaded as it gets in the West. They have 10 skaters with 20-or-more points and are notorious for their up-beat, high octane offensive attack. The Giants have to commit to a ‘complete defensive effort’ tonight against Portland to get back into the win column.

Ty Ronning: The 20-year-old forward comes into tonight’s game one goal shy of 50 for the season. Ronning remains second in the WHL goal-scoring race, two behind Moose Jaw’s Jayden Halbgewachs and one ahead of Swift Current’s Glenn Gawdin.

Tyler Benson: The Giants captain has three assists in three games against Portland and is tied for second in team scoring with 51 points. Benson has two goals and six assists for eight points in his past seven games played.

Brennan Riddle: The 20-year-old remains one of just two healthy non-rookie defenceman on the Giants blueline right now. He’s played enormous minutes recently because of the team’s injury situation and tonight will be no different in Portland.

Joel Sexsmith: The 9th overall pick from the 2017 WHL Bantam Draft will make his WHL debut tonight for the G-Men and will wear #47. Sexsmith looks to be a future mainstay on the Giants blueline, and tonight he’ll get his first taste of life in the WHL as he’ll be thrown into the deep end in one of the league’s most hostile buildings.

David Tendeck: The 18-year-old draft eligible goaltender is 2-1 against Portland this season with a 1.35 goals-against-average and a .963 save percentage and one shutout. He’s been a huge reason for the Giants success against Portland this season and tonight he’ll need to bring his best again as the Winterhawks will no doubt be encouraged to pepper the Giants net from all areas tonight. His overall record is 20-11-2-2 with a .913 save percentage and a 2.93 goals-against-average.

Get the offensive swagger back: Despite the Giants injury situation on the back-end, the offense at the other side has gone cold as of late. The G-Men have just three goals in their past three games, and there’s simply too much depth and talent on this team to stay silent for much longer. The Giants don’t want to get into a track meet style of game with Portland, but it’ll be paramount for the Giants to convert on their chances when they happen.