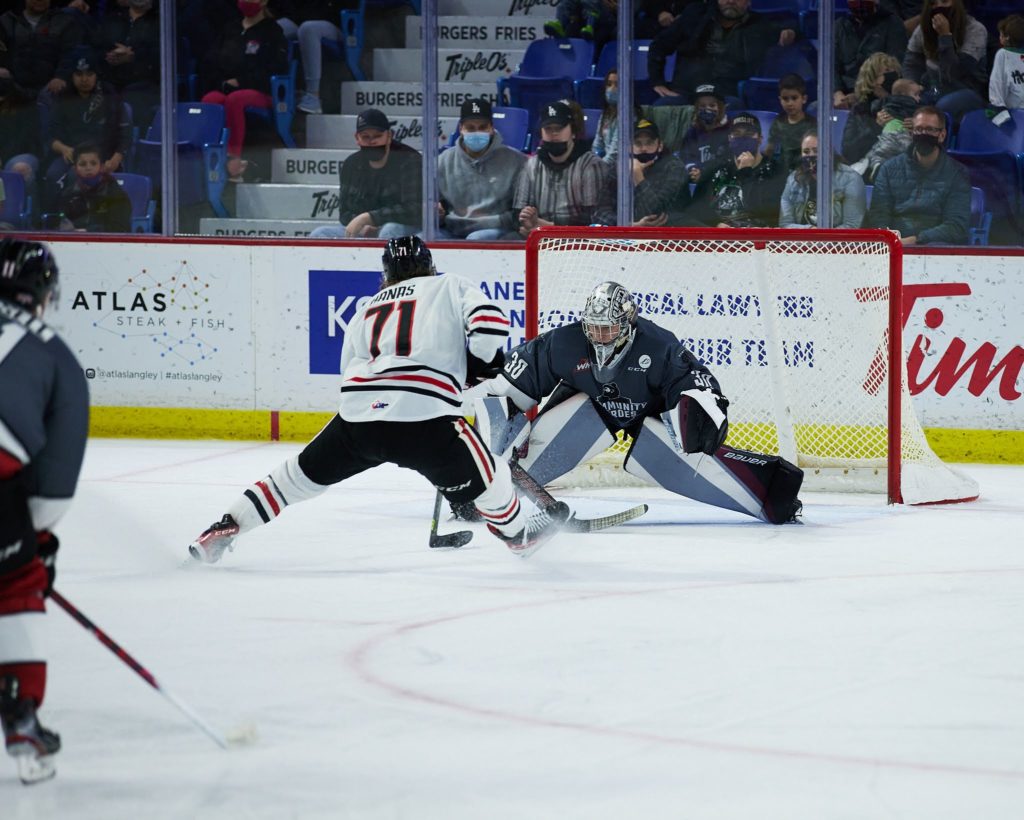 Tonight in Portland the Vancouver Giants play their first hockey game on US soil since February 22, 2020. Michael Dyck’s Giants (7-7-1-0) are looking to bump a four-game losing skid when they clash with the Portland Winterhawks (7-9-1-1) for the second time this season.

Last Game: A 4-2 home victory over the Kelowna Rockets on Saturday, November 20th.

FAST OUT THE GATES

Saturday night at home against the Kelowna, the Portland Winterhawks struck four times in a span of 6 minutes and 30 seconds and never looked back en route to a 4-2 victory over the Kelowna Rockets. Jaydon Dureau and Clay Hanus each had two points in the period and goaltender Lochlan Gordon did the rest, making 23 saves on 25 shots faced to earn the victory. That win gave Portland their seventh of the season and has them ranked fifth in the Western Conference, one point ahead of the Vancouver Giants.

On Saturday November 6th the Portland Winterhawks made their way North to battle the Vancouver Giants at the Langley Events Centre. That night it was the Giants who struck multiple times in the first period (three goals in 2:05) to secure an early 3-0 lead. James Stefan struck late in the third period on a power play for Portland giving them their only goal of the night against Jesper Vikman and the G-Men. The Winterhawks did pepper the Giants goal with 39 shots though and since that game the Winterhawks have gone 3-2.

Last Game: A 3-2 regulation loss on Saturday night at home against Victoria.

Tonight the Vancouver Giants get a big boost to their back-end when the expected return of over-ager Alex Cotton. In four games with the Giants, Cotton has struck twice and added an assist for three points. He missed the two previous games for Vancouver with an injury. His return provides a strong two-way boost for the Giants and gives them a full contingent of 20-year-olds in their lineup for just the sixth time in a span of 16 games.

THE SEASON SERIES SO FAR

Back on November 6th the Vancouver Giants earned a 3-1 home victory against the Portland Winterhawks. Ty Thorpe, Nicco Camazzola and Connor Horning supplied the offense while Jesper Vikman put forth a 39-save first-star performance between the pipes. Tonight though the Vancouver Giants are looking to secure their first victory in Portland since February 14, 2018. That night Ty Ronning scored his 50th and 51st goals of the season and David Tendeck made 47 saves to give the Giants a 4-2 victory.