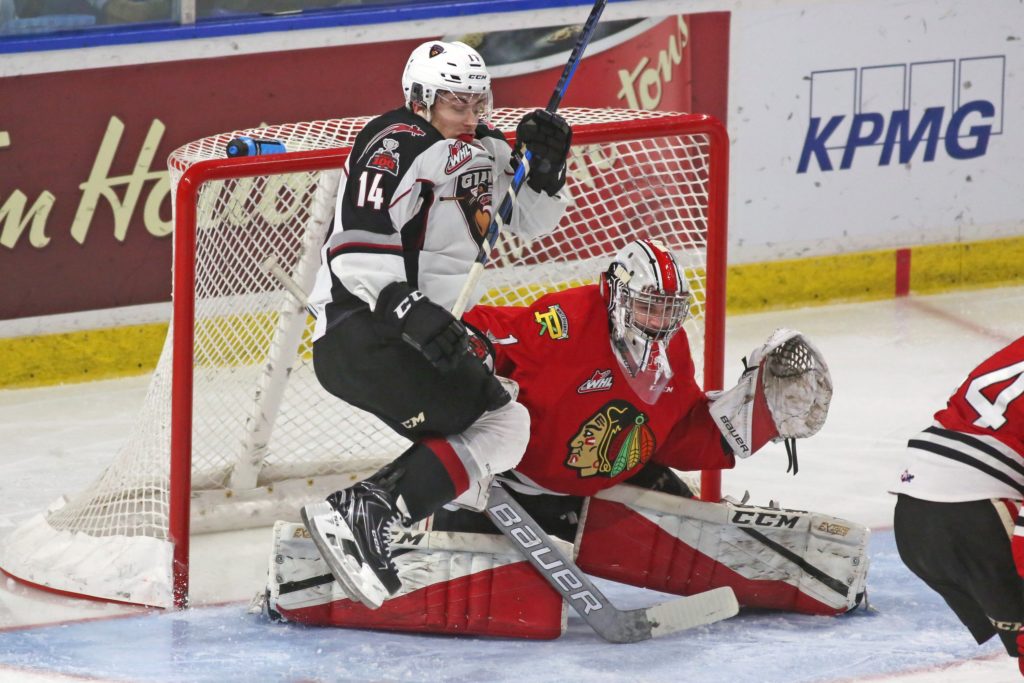 Tonight in Portland, the Vancouver Giants kick off another three-in-three weekend when they take the ice against the Portland Winterhawks for the first time this season. The Giants are coming off a 6-2 win at home Tuesday over the Broncos in a game that saw them register 71 shots. They have won two straight and have gone seven games without a regulation loss.

Joachim Blichfeld: The 1998-born prospect of the San Jose Sharks is off to a torrid start offensively. Blichfeld has recorded at least a single point in eight of his first nine games. Last Saturday against Everett marked the only game of the season that Blichfeld has been kept off the score sheet. He leads the Winterhawks with eight goals and 22 points. Only Prince Albert’s Brett Leason has more points.

Cody Glass: The first ever draft pick of the Vegas Golden Knights has notched at least one point in every game he’s played in so far this season. Glass has registered three goals to go with 15 assists in only seven games. For his WHL career, Glass has recorded 82 goals and 159 assists for 241 points in 208 games.

Brendan De Jong: The 20-year-old Victoria native is hard to miss. He’s 6’5”, 200 pounds and contributes big-time minutes in all situations for his team. So far De Jong has two goals and five assists for seven points and is a +4. Over his past three full WHL seasons, he’s only missed four games.

Shane Farkas: 1999-born goaltender Shane Farkas has played every second of hockey so far this season for the Portland Winterhawks. The Penticton native has a record of 5-3-0-1 with a 2.88 goals-against-average and a .897 save percentage. Last season he went 14-6-0-1 with three shutouts, a .913 save percentage and a 2.79 goals-against-average. One of those shutouts came against Vancouver in January, 2018.

Power Play: Through nine games, the Portland Winterhawks have earned 54 power play opportunities. That’s an average of six-per-game. Only the Lethbridge Hurricanes have had more power plays (55) than the Winterhawks and they’ve played in one more game. Special teams are a major driving force behind Portland’s success, so the Giants will need to be mindful of that, and will try to keep the game at five-on-five or better as much as possible.

James Malm: The Giants leading scorer led all Vancouver forwards with three assists Tuesday in the 6-2 win over Swift Current. Malm still leads all Giants in scoring with 14 points through 11 games. Last season against the Winterhawks, Malm notched a goal and two assists for three points in four meetings with the Winterhawks.

Davis Koch: The 20-year-old Surrey native has points in each of his last four games and comes into tonight with three goals and seven assists for 10 points on the season. During his four-game point streak, Koch has registered two goals and four assists for six points.

Bowen Byram: Bowen Byram was named first star in Tuesday’s win over Swift Current and is coming off a game where he struck twice and added an assist. Byram leads all Giants defencemen in scoring with four goals and five assists and earlier this week was named to Team WHL’s roster for the 2018 CIBC Canada Russia Series. He had two assists in two meetings with Portland last season.

Alex Kannok Leipert: Bowen Byram’s defence partner Alex Kannok Leipert registered his first goal of the season on Tuesday against the Broncos. For the season the Washington Capitals prospect has produced a goal, four assists a +5 and 12 penalty minutes. Tuesday was a breakout game offensively for the 2000-born rearguard, and he’ll look to keep that positive trend going this weekend.

David Tendeck: The 1999-born product of North Vancouver was also recently named to Team WHL for the Canada Russia Series and deservedly so. Tendeck is 7-1-1-0 this season with a 1.95 goals-against-average and a .919 save percentage with one shutout. Tendeck went 3-1 against Portland last season with a shutout, a 1.51 goals-against-average and a .962 save percentage!

Keep those Shots Coming: The Vancouver Giants have registered 111 shots over their past two games. Consequently the Giants have won both of those games in fairly dominant fashion. The Giants have outshot their opponent in nine of their first 11 games this season and have gone 7-1-1-0 in those games. Keeping the Portland Winterhawks hemmed in their own zone for as much of the game as possible will be a big key for Michael Dyck’s crew tonight on the road.