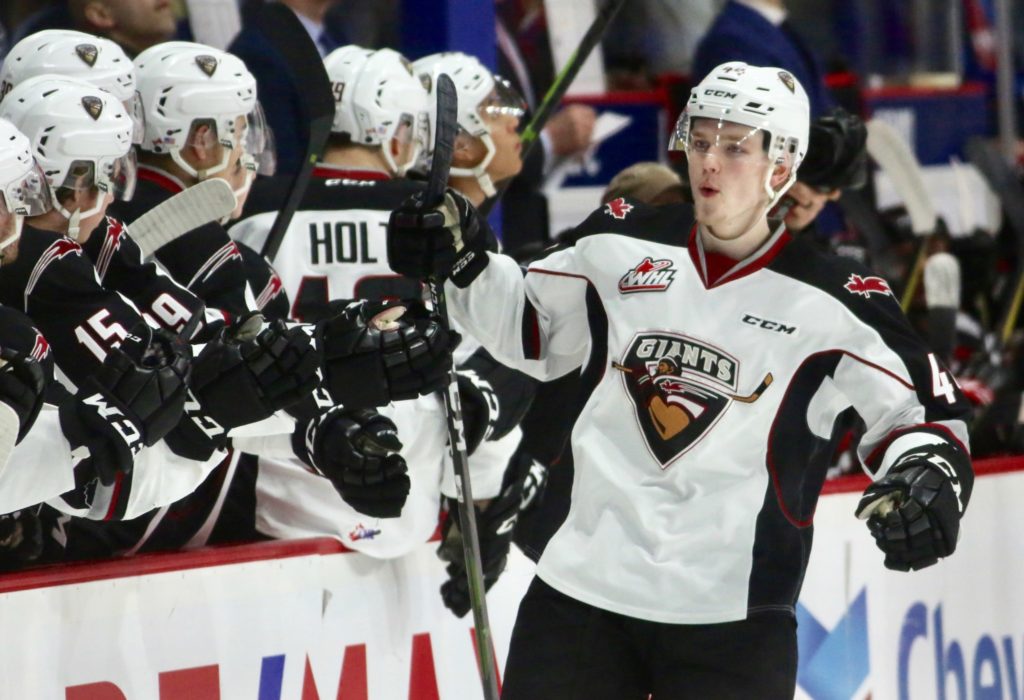 Tonight in Moose Jaw, the Vancouver Giants look to return to the .500 mark when they clash with the Moose Jaw Warriors. The Giants are 1-3 so far on their Prairie Trip, but there’s plenty of reason to suggest that the Giants have deserved better. A 1-3 record could easily be flipped to 3-1 based on how close these games have been.

The reigning Rookie of the Year in the WHL will be in uniform tonight for Moose Jaw. Anaheim Ducks prospect Brayden Tracy has returned to the Warriors and will make his 2019-20 debut tonight against the Giants. Last season Tracey scored 36 goals and added 45 assists for 81 points. He finished 19 points ahead of the next closest rookie (Adam Beckman) last season. He was selected 29th overall by the Anaheim Ducks in the 2019 NHL Draft.

So far so good for two former Vancouver Giants who are now wearing Moose Jaw Warriors sweaters. In two games with the Warriors, Owen Hardy has struck twice while Jadon Joseph has notched three goals and four assists for seven points in six games. Both will no doubt be charged up to face the Vancouver Giants tonight in Moose Jaw.

Now in his 19-year-old season, Carson Denomie is off to a hot start with Moose Jaw. The product of Regina, SK comes into tonight’s game with four goals and six assists for 10 points to share the team lead in scoring. The former Kamloops Blazer is on pace to obliterate his previous season high for points (19) that he set in his rookie season in 2017-18.

Last Game: A 2-1 loss on Wednesday night in Saskatoon.

Offensively the Vancouver Giants will get a big boost with the return of Lukas Svejkovsky. The sophomore forward from Point Roberts, WA had 26 points last season and has one goal in three games this season for the Giants. Earlier this week Svejkovsky cracked NHL Central Scouting’s preliminary Players to Watch list, and no doubt he’ll continue to be on the radar of NHL teams during this season.

Giants defenceman Dylan Plouffe comes into tonight’s game riding a three-game point streak. Altogether he’s notched five points in his past five games, and sits in a three-way tie with Bowen Byram and Seth Bafaro for the team lead in scoring by defencemen. Plouffe had the lone goal for the Giants Wednesday in Saskatoon and has a +3 rating through nine games this season. He’s played an integral role in the Giants success from the back-end so far in 2019-20.