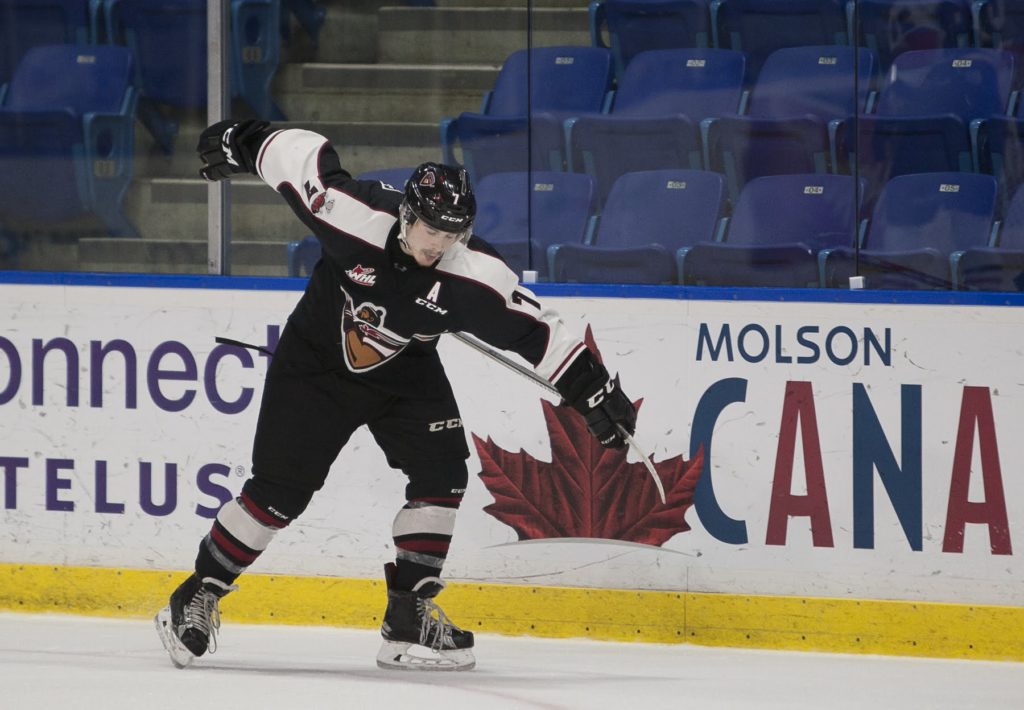 Tonight in Medicine Hat, the Vancouver Giants will take aim at a share of first place in the B.C. Division when they take the ice for the first time this season against the Central Division leading Medicine Hat Tigers. Last night in Lethbridge the Giants were full marks in a 5-2 victory. They’ve now won three straight overall, five straight on the road and have just one regulation loss in their past 12 games. The Tigers are coming off a win against Edmonton are and 3-0-1-0 in their last four games. There will be no shortage of quickness and skill on the ice tonight when these two clubs get together.

Last Game: A 5-1 victory at home last night against Edmonton

Mark Rassell: Coming into tonight’s game, Rassell sits third in WHL goal scoring with 34 goals. He’s scored in five straight games and during that span he’s scored six goals while adding four assists for 10 points. The showdown between Mark Rassell and Ty Ronning will be a fun storyline tonight.

Max Gerlach: The 19-year-old forward has been a perennial 30-goal guy in the WHL and this season should be no exception. Coming into tonight’s game Gerlach has 16 goals which ranks him third on the team and when all is said and done he should crack the 30-mark once again. Last season he had 34 and the season prior he had 30. He has three goals in his past two games.

David Quenneville: The 19-year-old prospect of the New York Islanders leads all WHL defencemen in goals with 17 and sits second in the WHL in points with 46 trailing only Kale Clague of the Brandon Wheat Kings. He’s got goals in back-to-back games coming into tonight.

Kristians Rubins: 20-year-old Kristians Rubins is a rare two-spotter who takes up an Import and 20-year-old spot on this Medicine Hat team. So far this season Rubins has registered three goals along with 14 assists for 17 points. He’s hard to miss out there as he checks in at 6’5” and 220 pounds.

Jordan Hollett: 18-year-old Jordan Hollett has thrived with his new team this season. The Ottawa Senators prospect has posted a record of 13-8-2-0 with an .899 save percentage and a 3.36 goals-against-average.

Offensive Depth: The Medicine Hat Tigers have nine skaters with 20-or-more points to their credit this season. That suggests that this team is more than just a one line team. Defensively the Giants will need to be weary of a handful of quick, offensively gifted players.

Tyler Benson: The Giants captain was named the first star in last night’s game in Lethbridge after posting two more goals. In 28 games the Oilers prospect has 17 goals and 23 assists for 40 points which places him tied for second in Giants scoring. He’s got three goals in his past two games.

James Malm: Though he was only credited with one assist last night, James Malm was a big-time positive factor. He sits tied with Tyler Benson for second in team scoring with 40 points and has quietly put together a five-game point streak heading into tonight’s clash with Medicine Hat.

Darian Skeoch: With three points in his last two games, Darian Skeoch has started chipping in a bit more offensively, which should be a great thing for his confidence. The 20-year-old is a cornerstone of this team and has played some really good two-way hockey as of late. Though offense will never be his top priority, it would be fun to see him continue to contribute offensively tonight in Southern Alberta.

Alex Kannok Leipert: The rookie from Regina scored his second goal of the season and it proved to be an important goal as it tied the game at one in the later stages of the first period. His stat-line now shows two goals and 15 assists for 17 points and his +8 rating is tied for second best on the team with Bowen Byram.

Todd Scott: Tonight it’s Todd Scott’s turn to carry the mail for the Giants in goal. For the season Scott is 7-7-3-1 and is coming off a victory on January 1st against the Cougars where he stopped 12 of 13 in relief. Four of Scott’s seven wins this season have come on the road, and he’ll look to keep that positive trend going tonight in Medicine Hat.

Ty Ronning: Last night in Lethbridge Ty Ronning paced the Giants attack with a goal and two assists. He was his usual pesky, aggressive and driven-self and was a major factor in the Giants success. He currently sits tied for second in the WHL in goal scoring with gold medal hero Tyler Steenbergen of the Swift Current Broncos, and tonight he’ll look to win the battle against Mark Rassell and the Tigers which hopefully leads to another road victory for the Vancouver Giants.