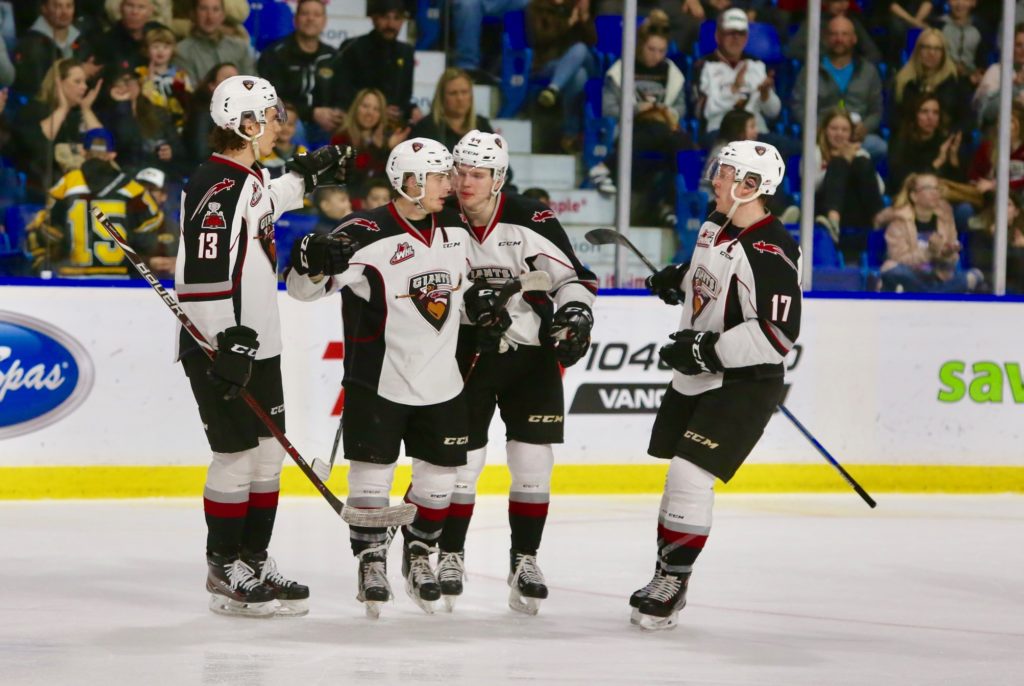 Tonight for the Vancouver Giants it’s all about self. Heading into game number 72 of their regular season, the Vancouer Giants have numerous reasons to feel good about their season and their situation in the ‘big picture’ but in the immediate here and now there’s disappointment given how things played out last night at home. The Giants dropped a 5-2 decision to Kelowna last night eliminating any chance of beginning the playoffs on home ice next weekend. It’ll be a young lineup dressing for the Giants tonight in the rematch at Prospera Place.

Carsen Twarynski: The newly signed prospect of the Philadelphia Flyers led the Rockets with two goals in last night’s victory. He now has 45 on the season to lead the team and also leads all Rockets with seven goals and three assists against the Giants.

Gordie Ballhorn: Ballhorn contributed a goal to Kelowna’s cause last night, but beyond any offensive contributions, his play in the defensive zone was very key to the Rocket’s success. The 20-year-old leads the team in plus-minus with a +33 rating.

Kaedon Korczak: Selected 11th overall by the Rockets in the 2016 WHL Bantam Draft, the 16-year-old has had a strong rookie season and should play a big part in Kelowna’s defensive success in the seasons to come. He has three goals and 12 assists for 15 points to go along with a +3 rating. He was the third defenceman picked in 2016 behind Bowen Byram (Vancouver) and Matthew Robertson (Edmonton).

James Porter: Although Brodan Salmond made 37 saves on 39 shots faced last night, odds would favor James Porter to get the final home start of the season for Kelowna. The 17-year-old rookie has an impressive record of  21-9-4-1 with a 3.34 goals-against-average and a .894 save percentage.

Star Power: Dillon Dube, Kole Lind, Cal Foote, Nolan Foote and James Hilsendager all did not play in last night’s win for the Rockets which makes their road victory in Langley all the more impressive. All should draw back into their lineup tonight as they wrap up their home regular season schedule.

James Malm: The 18-year-old has one goal and six assists for seven points over the course of his last six games. He comes into tonight ranked third in team scoring with 65 points. If he can score tonight he’ll match his previous season high for goals which he set last season.

Davis Koch: Koch had his seven-game point streak snapped last night against the Rockets. That said his recent run of offense has been impressive as he’s recorded a goal and 11 assists for 12 points in the span of eight games.

Darian Skeoch: The 20-year-old was voted as the Unsung Hero for the Giants before last night’s game and the award is incredibly deserved. Skeoch brings toughness, leadership and defensive dependability to the Giants game-in and game-out. His 111 penalty minutes leads the team.

Dylan Plouffe: Prior to puck drop last night, Plouffe was named the Defenceman Of The Year for the Giants and rightfully so. His nine goals and 31 assists for 40 points ranks him first on the team in scoring among defencemen.

Trent Miner: The rookie is 3-3 on the season but is 2-1 for his career in road starts. He’s won each of his past two road starts including earlier this week on Wednesday against the Kamloops Blazers.

Seize the Opportunity: Tonight a lot of the younger players will be given heavy responsibility as the likes of Ty Ronning and Tyler Benson will not play for the Giants up front. With playoffs just around the corner it’s important for some of these younger players to make the most of their minutes and opportunities in order to show that they can be trusted with important minutes come the post season.