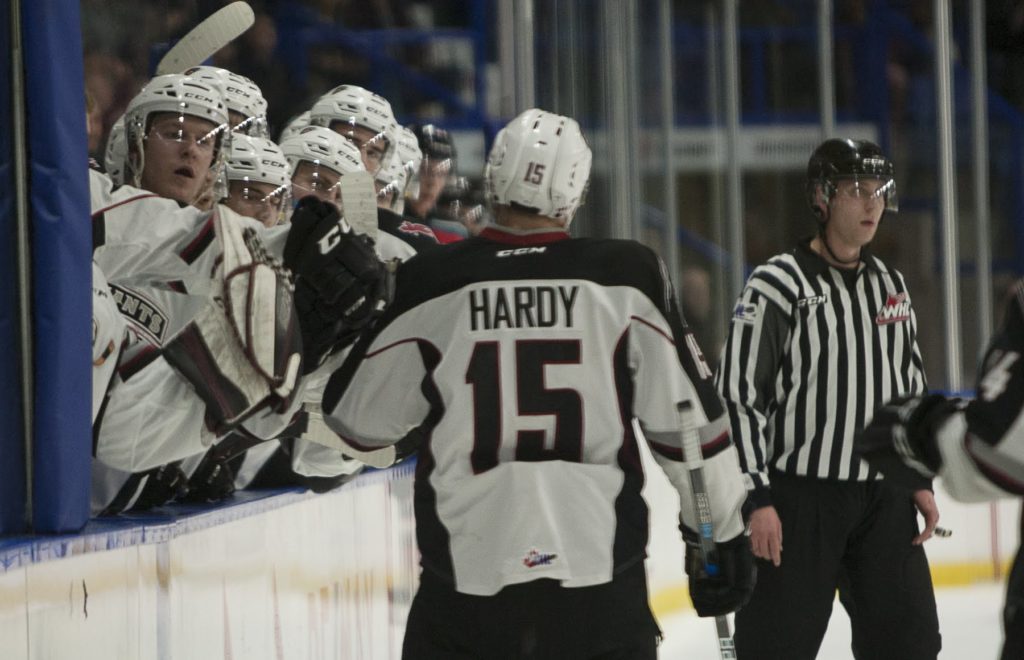 With a berth in the 2018 already sewn up, the Vancouver Giants take to the road for their next five games, and six of their final seven games overall. Tonight in the Okanagan, the Giants get their road show started with their sixth meeting of the season against the B.C. Division leaders, the Kelowna Rockets. So far this season the Giants are 2-2-1-0 against Kelowna and are 0-1-1-0 against them on the road. It’s an important game for both teams as the Rockets are looking to stay ahead of Victoria for first in the division while the Giants need the win to hop back within striking distance of Victoria. The Royals, for what it’s worth are also in action tonight at home against Spokane. The meaningful hockey continues tonight for the Giants.

Last Game: A 4-2 loss at home Saturday to Spokane

Kole Lind: The newly signed Vancouver Canucks prospect leads all Rockets in points with 87. He’s matched his point totals from a season ago and has done so in 17 fewer games. He has five goals in his last three games and has two goals and two assists in three games against Vancouver.

Dillon Dube: Team Canada’s captain at the World Juniors has reached the 30-goal mark in the WHL for the first time this season. His 72 points are also a new season high. Dube has five goals and seven assists for 12 points in his last seven games and two goals and two assists in three games against Vancouver.

Cal Foote: The Tampa Bay Lightning first rounder has blossomed into one of the best two-way defencemen in the WHL. His 17 goals and 63 points are tops among Rocket defenders and among all WHL defencemen he ranks eighth in points. In five games against the Giants he has five assists.

Gordie  Ballhorn: 20-year-old Gordie Ballhorn has the best plus-minus on the team with a +25 rating and his 35 points rank him second behind Cal Foote for scoring among Rockets d-men. In each of Ballhorn’s first two seasons, he registered nine points, so his 26-point improvement this season is noteworthy.

Brodan Salmond?: The 19-year-old is 11-10-0-1 through 24 appearances this season, but his lone game against the Giants was a good one. Back on February 7th, he made 25 saves on 26 shots faced, leading the Rockets to a 4-1 victory at home. He was named the game’s third star. At one point in February he won four straight starts. Does that warrant the nod today against the Giants?

Power Play: The Rockets come into the game with the second best power play in the WHL. While the Giants fourth-ranked penalty kill is nothing to scoff at, the Rockets have made a good living in recent seasons torching opposing team’s with the extra-attacker. It’s also worth noting that the Rockets have 51 more power plays this season compared to the Giants who rank dead last in the WHL in power play opportunities with 223.

Ty Ronning: Earlier this week the 20-year-old inked a three-year NHL entry-level contract with the New York Rangers. It’s been a long-time coming for Ronning who leads the Giants with 55 goals and 77 points through 64 games. Ronning has three goals and one assist for four points in four games against Kelowna this season. The only game of the season he’s missed was the game in Kelowna back on February 7th.

Tyler Benson: The Giants captain leads all Giants in scoring against Kelowna with four goals and three assists for seven points in five games played. Benson is ranked second on the team in goals (23) and points (62).

Alex Kannok Leipert: The rookie leads all Giants in scoring against the Rockets with three assists in five games. In 56 total games, the Regina native has four goals and 16 assists for 20 points which ranks him fourth among all WHL rookie defencemen in scoring.

Dylan Plouffe: Plouffe returned to the Giants lineup on Sunday against Everett and looked sharp in his first game from an injury that he suffered in Kelowna against the Rockets on February 7th. Despite an 11-game absence, Plouffe still leads the Giants in scoring from the back-end with eight goals and 37 points.

Bodies: The Vancouver Giants have left the Lower Mainland with 24 players on the bus. That means that everybody on the roster is either healthy, or darn close. There’s a strong possibility that Owen Hardy, Cyle McNabb and (hopefully) Milos Roman will all play games this weekend, and while winning is certainly important, it’ll be just as important for some of these guys to get their energy and confidence back in peak form before the playoffs arrive.