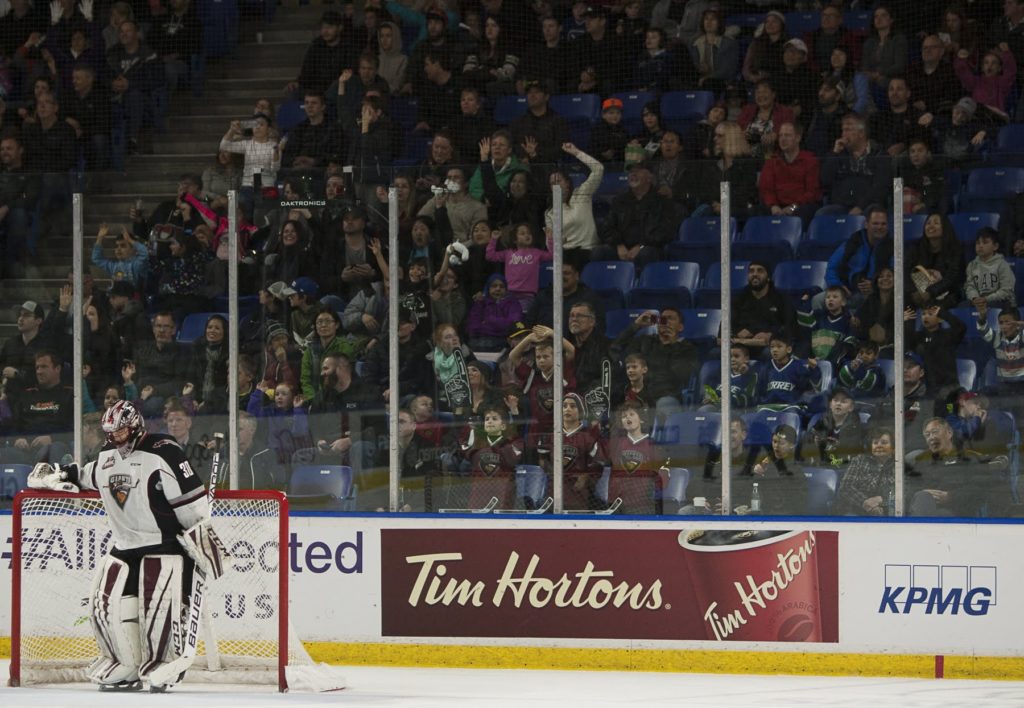 Tonight at Prospera Place, the Vancouver Giants look to inch a little bit closer to first place in the B.C. Division when they go head-to-head with the Kelowna Rockets for the fifth time this season. The Giants are coming off three straight victories and have secured points in eight of their last 10. The Rockets have dropped two straight and are 5-4-1-0 in their last 10 games. Through four games so far the G-Men are 2-1-1-0 against Kelowna. Both teams are dealing with some significant absences tonight as illness and injury have started to take their toll on these two B.C. Division foes.

Kole Lind: The second-round draft pick of the Vancouver Canucks had a 20-game point streak snapped on Saturday in Everett. During that span Lind had 15 goals and 23 assists for 38 points. Coming into tonight’s game Lind has 72 points which gives him the third highest point total of any Western Conference skater.

Carsen Twarynski: The 20-year-old prospect of the Philadelphia Flyers has two goals and two assists in four games against the Giants this year and his 33 goals are tops on the team. Twarysnki is especially dangerous on the power play as he’s registered 12 power play goals.

Cal Foote: The 2017 first round pick of the Tampa Bay Lightning is having another terrific season at both ends of the ice for the Kelowna Rockets. The 2017 World Junior gold medalist leads all Rocket rearguards with 13 goals and 34 assists for 47 points. He’s ninth in WHL scoring for defencemen.

Gordie Ballhorn: With fellow 20-year-old defenceman James Hilsendager sidelined with an injury, a lot of the defensive onus is going to be on Ballhorn to log big minutes against the Giants top players. Ballhorn has three goals and 25 assists for 28 points and is tied for the team lead in plus-minus with a +24 rating.

Brodan Salmond: With goaltenders James Porter and Roman Basran dealing with injuries, it looks like 19-year-old Brodan Salmond will get the nod tonight for the Rockets. Salmond missed a large chunk of time at the start of the season, and has only appeared in 14 games. During that span though he’s 6-6-0-1 with an .870 goals-against-average and a 3.93 save percentage.

Dillon Dube: The captain for Canada at the 2017 World Juniors is a big-time threat whenever he takes the ice thanks to his speed and his tenacity. In just 34 games this season, Dube has potted 22 goals while adding 28 assists for 50 points. He has also notched three shorthanded goals, which makes him a legitimate offensive threat even when down a man. He’s the type of player that can take over a game on his own, and the Giants will need to contain Dube and his linemates as best as possible.

Last Game: A 5-4 home victory over Medicine Hat on Saturday

Tyler Benson: The Vancouver Giants captain has put together a decent run offensively as of late. Coming into tonight he’s earned points in each of his past four games and has two goals and five assists for seven points in that span. For the season, Benson has compiled 19 goals and 31 assists for 50 points which ranks him third on the team. Benson leads all Giants with four goals and two assists for 6 points in four games against the Rockets.

James Malm: The 18-year-old has also had some terrific games against the Rockets in 2017-18. His two goals and four assists tie him with Tyler Benson for the most points against the Rockets through four games. Malm has points in each of his past two games and currently sits second in team scoring with 51 points through 52 games.

Bowen Byram: The 16-year-old rookie has scored in each of his past two games and now has six goals and 18 points thorugh 41 games. Byram’s six goals are second only to Dylan Plouffe among Giants defencemen. His +6 rating is also impressive considering he logs major minutes, often against the opposition’s top forwards.

Alex Kannok Leipert: Fellow rookie Alex Kannok Leipert came through in the clutch on Saturday for Vancouver. With the game tied and time winding down in the third period, Kannok Leipert snapped home his third of the season from the top of the right circle which allowed the Giants to secure the 5-4 regulation victory over the Tigers. Through 49 games, Kannok Leipert has three goals and 16 assists for 19 points and is a +#.

David Tendeck: 18-year-old David Tendeck has been brilliant against the Rockets so far. In two starts he’s put together a 2-0 record with a 1,50 goals-against-average and a .947 save percentage. Tendeck hasn’t lost a game in regulation on the road since November 25th and brings an overall record of 19-9-2-2 to the table tonight. He’s played some marvelous hockey on the road this season and the G-Men are going to need him to rise up to the challenge tonight.

Take Advantage of the Opportunity: With illness and injury impacting both teams tonight, it will be so key for the Giants to use their speed and depth to their advantage. Lately they’ve been getting some great performances from players like Dawson Holt, Brayden Watts and Tyler Popowich and tonight they’ll need more of the same. The Giants haven’t won in Kelowna since March, 2011 and in order to do so tonight they’ll need ‘buy in’ from everybody.