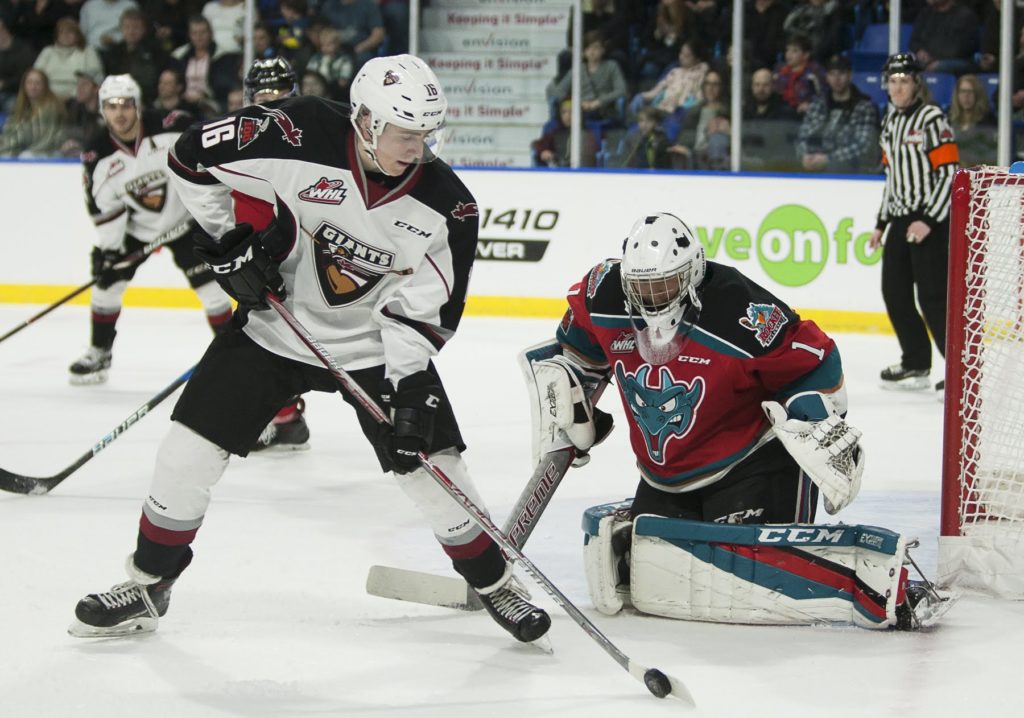 Tonight in Kelowna, the Vancouver Giants kick off a three-game road swing when they battle the Kelowna Rockets tonight at Prospera Place. The Giants were 3-4-1-0 against them last season and will face them eight additional times in 2018-19.

Leif Mattson: The 19-year-old leads all Rockets with five goals and seven points through five games. Last season he posted 25 goals and 35 assists for 60 points. He posted four goals and five assists against the G-Men in eight games a season ago.

Kaedon Korczak: The sophomore defenceman was recently graded as a ‘B’ defenceman on NHL Central Scouting’s Preliminary Players to Watch List. He leads all Rocket defenders with four assists and a +5 rating. He had three goals and 13 assists for 16 points in 67 games last season. He was teammates with Bowen Byram on Canada’s gold medal team at the 2018 Hlinka Gretzky Cup.

Libor Zabransky: The 18-year-old was selected by the Rockets in the first round of the 2017 CHL Import Draft. Last season he suited up in all 72 games and tallied twice while adding 17 assists for 19 points. One of those goals came against the Giants. So far in 2018-19 he has three helpers in five games.

Nolan Foote: The 2000-born forward is expected to be an early-round pick in the 2019 NHL Draft. He was given an ‘A’ grade on Central Scouting’s Preliminary Players to Watch List. Through five games he’s posted two goals and three assists for five points. Foote battled injuries last season, missing 22 games and only played in three games against the Giants.

Brayden Watts: The 19-year-old is coming off a first-star performance Sunday at home against Spokane. The California native had a goal, two assists and the shootout winner to secure his first three points of the young campaign. In eight games against the Rockets last season, Watts posted a goal and four assists for five points.

James Malm: The 19-year-old has scored in each of his past two games, in three of the first four games and leads all Giants with four goals and five points in the early stages of 2018-19. Last season Malm led all active Giants with two goals and six assists for eight points in eight meetings against the Kelowna Rockets.

Bowen Byram: The talented defenceman registered his first two points of 2018-19 on Sunday when he registered a goal and an assist in the victory. Earlier this week Byram was given an ‘A’ grade on Central Scouting’s Preliminary List. He appeared in six of the eight meetings last season against the Kelowna Rockets.

Kaleb Bulych: The 2000-born defenceman also cracked the goal column for the first time in 2018-19 on Sunday. His second period goal momentarily tied the game for the Giants, and matched his goal total from a season prior. Bulych has a goal and an assist through four games so far and he leads the G-Men with 10 penalty minutes.

Trent Miner?: David Tendeck has played every minute of Giants hockey through four games so far, which means that Trent Miner will likely see some action this week at some point. The 17-year-old rookie was also ranked on NHL Central Scouting’s Preliminary List as a ‘C’ prospect, which means he’s expected to be picked in the later rounds of the 2019 NHL Draft. Miner was 0-2 in two appearances last season against Kelowna.

Power Play: The Giants only had one power play on Sunday against Spokane, but Michael Dyck was encouraged by what he saw. A few seconds after it had expired, the Giants scored their first goal of the game. It’s a matter of ‘when’ not ‘if’ the Giants find their groove on the man advantage, and tonight they’ll look to use special teams to their advantage.