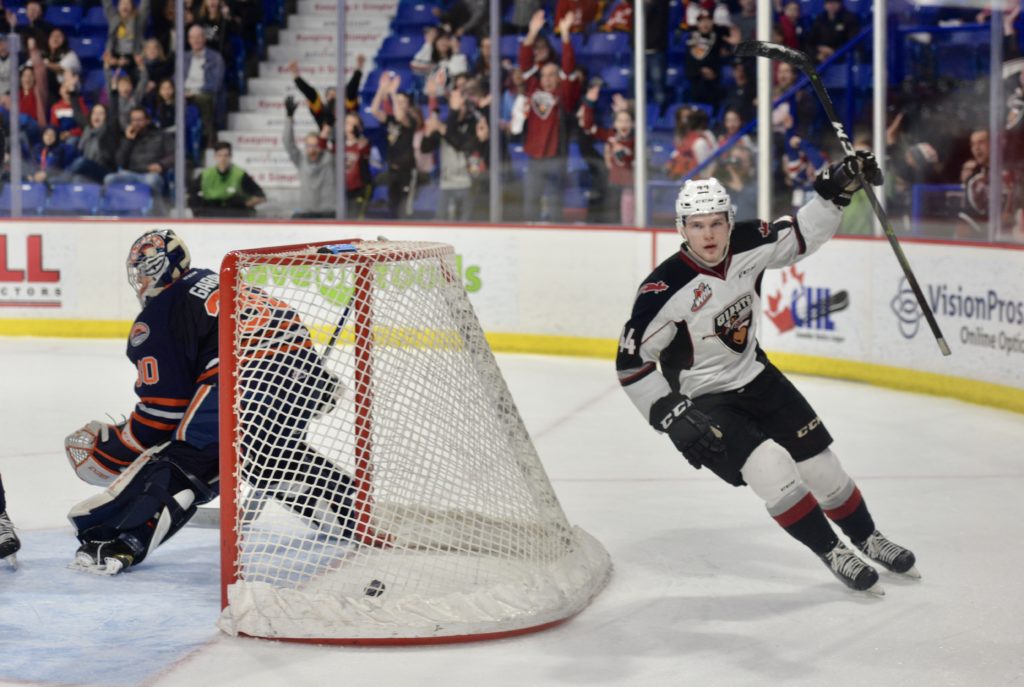 Tonight in Kamloops the Vancouver Giants make their fourth and final trip to the Sandman Centre to battle the Blazers for the eighth and final time. So far in 2018-19 the G-Men are 7-0 against Kamloops and will be facing them for a third time in a span of five days. The Giants roll into Kamloops winners of four straight games. Michael Dyck’s crew is 5-0-0-1 in their last six games and are just two points back of first place in the Western Conference standings. The Kamloops Blazers have lost three straight and are currently seven points back of a playoff spot.

Last Game: A 5-4 overtime loss to the Giants on Sunday afternoon at the LEC.

2000-born forward Brodi Stuart comes into tonight’s game riding a four-game point streak and a two-game goal scoring streak. The pride of Langley, B.C. has scored three goals in his past two games against the Giants, and for the season he has now compiled three goals and two assists for five points in seven meetings against the G-Men. His 19 goals are three more than his point totals from a season ago.

ALL ABOARD THE J-TRAIN:

Blazers captain Jermaine Loewen has recorded five goals and six assists for 11 points over the course of his past 10 games. Loewen had a goal and an assist for Kamloops on Sunday and a night earlier on Saturday he paced the Blazers with two goals. For the season the Dallas Stars prospect has now compiled 24 goals along with 14 assists for 38 points and a +10 rating. All 288 of his career WHL games have been played in a Kamloops Blazers uniform. He leads all Blazers with five goals against the Giants in 2018-19.

Coming into action tonight the Kamloops Blazers sit seven points out of a playoff spot with seven games (14 points) remaining in their season. The currently hold a game in hand on Seattle and two games in hand on Kelowna, both of whom are ahead of Kamloops by seven points. That means a victory tonight for the Blazers is pretty close to a ‘must win’ situation.

Last Game: A 5-4 overtime victory over Kamloops on Sunday at the LEC

Over his past nine games, Milos Roman has managed seven goals and nine assists for 16 points. Last weekend in three games played, Roman struck for four goals and five assists for nine points. Two of his three career four-point games occurred last weekend. For the season Roman has managed six goals and four assists for 10 points in seven meetings against Kamloops. If Roman records at least one point tonight he would match Davis Koch for the longest point streak put forth by a Giant this season. He leads the team with 27 goals.

Giants defenceman Bowen Byram comes into tonight’s game with 24 goals on the season, which gives him a share of the single-season record for goals in a season by a Giants defenceman which is shared with Kevin Connauton (2009-10). Byram tied Connauton thanks to his league-leading fifth overtime winning goal. Byram’s five overtime goals matches the most in a single season ever recorded by a WHL player matching both Eric Fehr (2004-05, Brandon) and Deven Sideroff (2016-17, Kamloops). He leads all Giants in scoring against Kamloops this season with five goals and eight assists for 13 points in seven games.