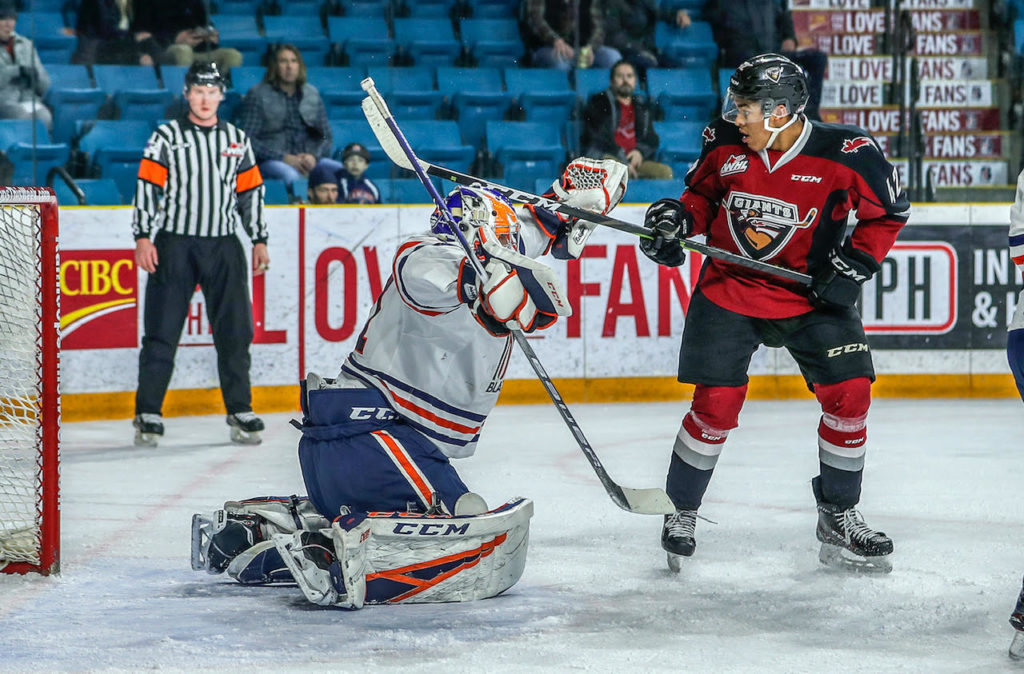 Tonight in Kamloops, the Vancouver Giants continue their push towards the post-season when they take the ice for the sixth time this season against the Kamloops Blazers. The Giants are coming off a 7-4 victory at home last night over the Kelowna Rockets and remain two points back of first place overall in the Western Conference. The Blazers meanwhile are coming off a 6-4 home loss to Seattle and are currently five points back of both the Kelowna Rockets and the Seattle Thunderbirds in the Western Conference standings. The Blazers are currently on the outside looking into the Western Conference playoff picture, and victories over the next stretch are a must for them. The Giants face Kamloops in each of their next three games.

1999-born forward Zane Franklin comes into tonight’s game leading the Blazers in both goals (26) and points (60). The Marwayne, AB native has surpassed his previous season best in points by 22 points already and leads all Blazers in scoring against the Giants with three goals and three assists for six points. Fun fact: Franklin is a cousin of Giants defenceman Dallas Hines.

2001-born forward Connor Zary is making a strong case for himself to be selected in the early rounds of the 2020 NHL Draft. Zary is a ‘late birthday’ thanks to his September 24th birth date, which means he’s not eligible to be drafted until next year. That’s scary news for opposing teams as Zary is clicking at a point-per-game pace this season. His 19 goals and 35 assists rank him second on the team in scoring. He’s only four points shy of doubling his point totals from his rookie season.

The Kamloops Blazers need to string some wins together if they want to be playing hockey past mid-March. Coming into action tonight the Blazers are five points back of Kelowna for third in the B.C. Divison (with two games in hand) and are five points back of Seattle for eighth place in the Western Conference standings. With nine games remaining in their season, the Blazers have 18 available points up for grabs. Winning their two games in hand on the Rockets will be crucial for them. Considering the Blazers next three games are all against the Giants, they’ll need to figure out a way to solve the Giants who so far are 5-0-0-0 against them. To their credit, the Blazers have earned two points against the Giants due to an overtime loss and a shootout loss.

Last Game: A 7-4 triumph at home last night over Kelowna

Calgary Flames prospect Milos Roman is playing some great hockey as of late for the Giants. Coming into action today, Roman has recorded points in each of his past seven games. During that span he’s tallied four times while adding seven assists for 11 points. Roman has scored three of his 24 goals this season against Kamloops and has added two assists to give him five points in five games. Roman has struck for 16 power play goals this season which ranks him third in the WHL.

In four meetings this season against Kamloops, Tristen Nielsen has snagged three goals along with five assists for eight points. Despite missing some time earlier this season waiting for a trade out of Calgary, Nielsen has climbed his way up to 31 points through 49 games. He’s only four points shy of matching his point totals from a season ago. Last night Nielsen supplied a goal and an assist for the Giants in their 7-4 win over Kamloops.