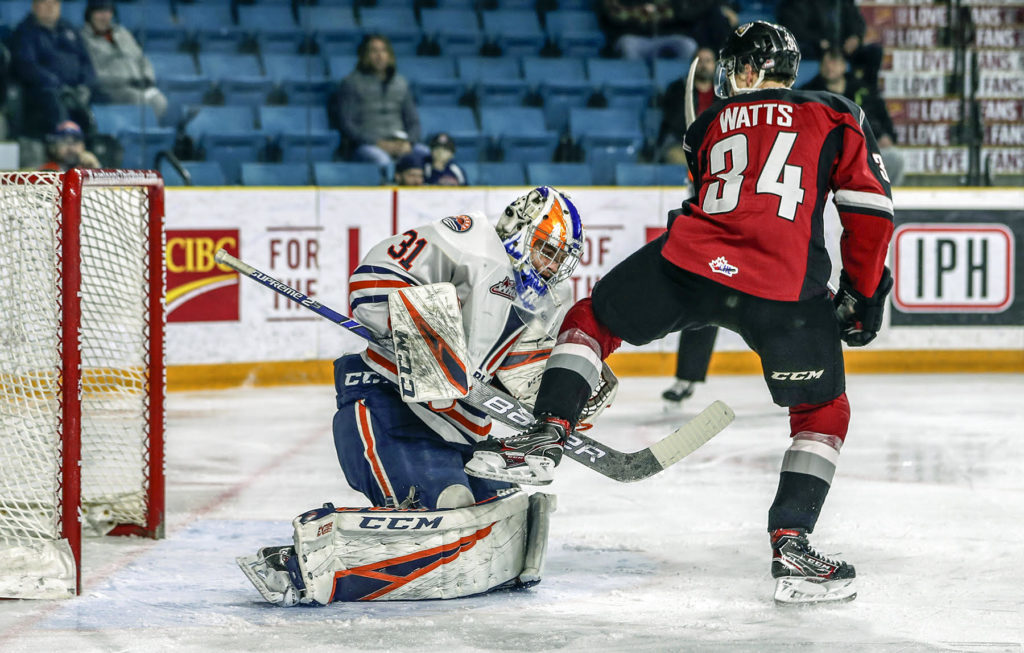 Tonight in Kamloops, the Vancouver Giants wrap up a stretch of three straight games on the road when they take the ice against the Kamloops Blazers for a fifth time this season. The Giants are 2-0 so far on the trip having rattled off back-to-back wins over Prince George earlier in the week. There’s plenty on the line as well for the Kamloops Blazers who head into tonight’s game trailing the Seattle Thunderbirds by one point for the final wild-card playoff spot, but they are also only just two points back of the Kelowna Rockets for a top three playoff spot in the B.C. Division while holding two games in hand.

1999-born forward Zane Franklin leads all Kamloops Blazers in both goals (24) and points (52). The Marwayne, AB native has produced points in six of his past seven games, and during that span he’s recorded four goals and five assists for nine points. Franklin leads all Blazers with three goals and three assists for six points in four meetings so far this season against the Giants.

20-year-old Jermaine Loewen comes into tonight’s matchup with 19 goals and eight assists for 27 points. When Loewen notches his next goal, it will mean he’s surpassed the 20-goal mark for a second straight season. In three meetings with the Giants so far this season, Loewen has scored twice. Only Zane Franklin has scored more goals against the Giants.

Last Game: A 4-3 overtime victory on Wednesday night in Prince George against the Cougars.

Tonight in Kamloops Giants captain Jared Dmytriw will take the ice for his 300th career WHL game in the exact same building that he played his first ever game. It’s been a terrific career for the Craven, SK native who has managed 55 goals and 48 assists for 103 career points through 299 games. This season, Dmytriw has set a new season high for points (27). Since arriving to the Giants in November, 2017 Dmytriw has become a core member of this Giants organization and he’ll look to make a positive impact in his 300th career WHL game tonight.

Wednesday night in Prince George, Bowen Byram scored his league-leading third overtime winning goal of the season, lifting the Giants over the Prince George Cougars by a 4-3 score. Byram leads all CHL defencemen with 21 goals now on the season, and he sits second on the team in overall scoring with 51 points in 51 games. One of Byram’s three overtime winners this season came against Kamloops back on January 30th. He leads all Giants with three goals and five assists for eight points in four games against the Blazers so far this season.