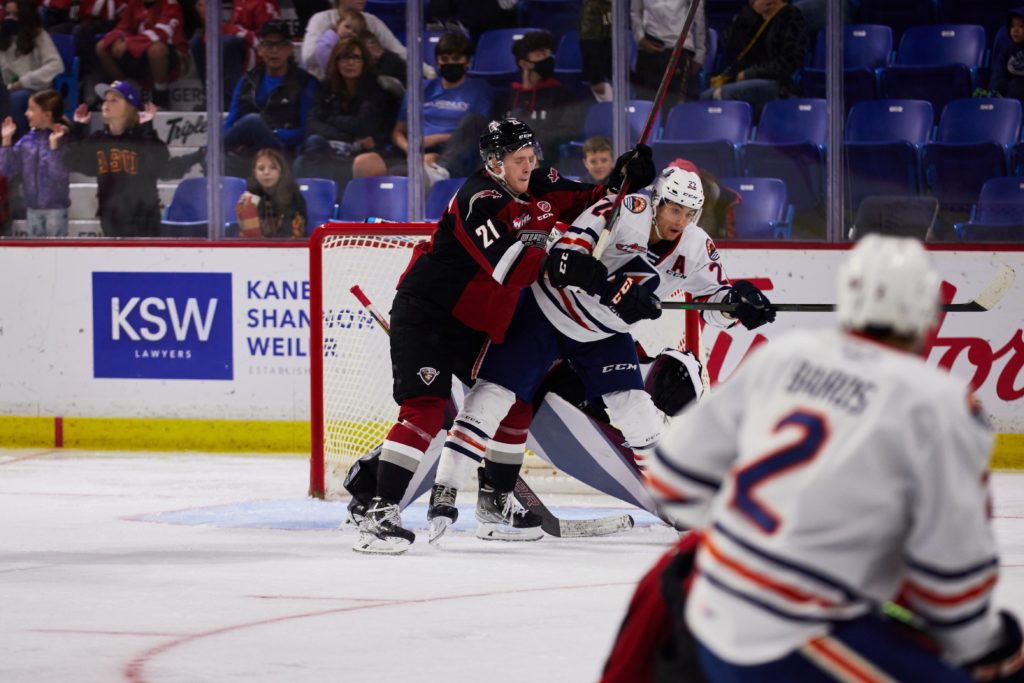 Tonight at the Sandman Centre, the Vancouver Giants look to get back into the win column when they clash with the B.C. Division leading Kamloops Blazers. Tonight marks the second time in as many games that the Giants will battle the Blazers, and are looking to avenge a 5-0 loss suffered against them back on Saturday night at home. Michael Dyck’s crew would love to start their busy weekend on a winning note when the puck drops tonight in Kamloops.

Last Game: A 5-0 victory against the Giants on Saturday at the LEC.

MONEY IN THE ‘BANK’

2003-born forward Caedan Bankier (Surrey, B.C.) is picking up right where he left off from last season. The 6’2″ forward enters the weekend with the team-lead in goals (6) and is in a four-way tie for the team lead ins coring with nine points. Bankier has recorded at least one point in five straight games, including a power play goal against the Giants last Saturday. He was selected by Minnesota in Round 3 of the 2021 NHL Draft.

The Kamloops Blazers have three players listed on NHL Central Scouting’s players to watch list that was released earlier this week. Forward Fraser Minten (3G) and defenseman Mats Lindgren (1G, 5A) were rated as ‘B’ prospects which are considered possible second or third-round choices, while forward Matthew Seminoff (1G, 5A) was rated as a ‘C’ prospect which is a potential fourth, fifth or sixth round selection.

Last Game: A 5-0 loss at home to Kamloops last Saturday.

Earlier this week, Giants forward Justin Lies earned a ‘C’ rating on NHL Central Scouting’s Preliminary Players to Watch List. The Flin Flon, MB native has posted one goal and two assists for three points in three games so far this season along with a +2 rating and four penalty minutes. Lies, a late 2003 birthday, is in his first year of NHL Draft eligibility.

2003-born forward Zack Ostapchuk is hoping for a different result in a couple of different ways tonight in Kamloops. The Ottawa Senators signed prospect was kicked out of Saturday’s game only 8:25 in for a check-to-the-head penalty. At the time, he was assessed a major penalty, but the WHL officials have since changed the call, meaning no additional supplemental discipline would be enforced. Ostapchuk returns to the Giants lineup tonight in search of his first goal of the 2021-2022 campaign.