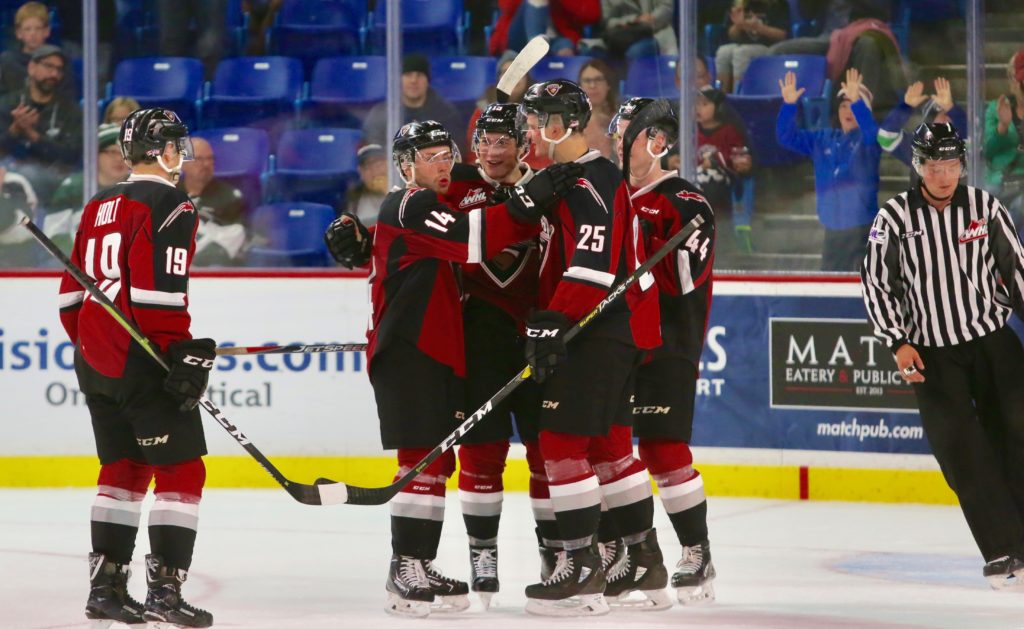 Tonight in Everett, WA the Vancouver Giants will take aim at a weekend sweep when they battle the Everett Silvertips for the second time in as many days. Last night the Giants earned a hard-fought 3-1 victory at home thanks to some stellar goaltending from David Tendeck and timely offense from James Malm. It will be an emotional night in Everett as a banner will be raised to the rafters and a loud, hostile atmosphere awaits the visiting Giants.

Connor Dewar: The 19-year-old played a strong game for the Silvertips and was rewarded with an assist on Martin Fasko Rudas’ first period goal. Dewar had numerous chances to score and did a fine job of putting himself into open spaces on the ice. He’ll be a big-time threat once again for Everett tonight.

Martin Fasko-Rudas: Now in his second season in the WHL, the 2000-born Slovak got off to a fine start last night by potting a power play goal in the first period on a redirect. Through 71 games last season, Fasko-Rudas netted six goals. Now that’s a year older and a year more familiar, he should obliterate that mark in 2018-19.

Wyatte Wylie: The Philadelphia Flyers prospect was as advertised last night. Offensively he chipped in with an assist and defensively he logged big minutes in all key situations for his team. The Giants can expect a steady dose of Wyatte Wylie again tonight.

Jake Christiansen: The 19-year-old played a strong two-way game for Everett last night, and like Wylie he made his presence felt in all situations for his team. As one of the elder statesmen on the Everett back-end, Christiansen will be looked upon to lead the charge and provide steady minutes for his club during their home opener.

Dustin Wolf: The 17-year-old California native played a strong game, albeit in a losing cause last night. He made 20 saves on 22 shots faced, and was at his best when the game was tied 1-1 during the first 19 minutes of the second period. It’s almost a given that he’ll hear his name called in the early rounds of the 2019 NHL Draft.

Special Teams: Last night the Silvertips won the special teams battle going one-for-four on the power play and killing off all five of their penalties. Historically the Silvertips have been a disciplined group and they’ll look to use special teams to their advantage once again in their pursuit of win number one on their season.

James Malm: The 19-year-old led the Giants attack with two goals, including the game-winner in last night’s 3-1 decision over Everett. Last season, nine of Malm’s 19 goals were game winners. It didn’t take him long to add another one to his career totals. He along with Dawson Holt and Owen Hardy played a strong game.

Owen Hardy: The other Giants goal last came courtesy of 19-year-old Owen Hardy who looks poised for a breakout year. The Nanaimo, B.C. native had 11 goals a season ago, but could be in line to crush that total in 2018-19. Tonight in Everett, Hardy will need to stick to his strengths and play that same physical, menacing type of game that made him so effective last night.

Matt Barberis: The 20-year-old did a little bit of everything for Michael Dyck’s team last night. He assisted on the empty-net goal, he defended hard, blocked shots and picked the right moments to jump up in the rush.

Kaleb Bulych: The 18-year-old showed very well alongside Bowen Byram in last night’s game. The 6’4” product of Yorkton, SK supplied an assist on Malm’s game-winner late in the second period and finished the game with a +2 rating and two penalty minutes.

David Tendeck?: The Arizona Coyotes prospect turned aside 30 of the 31 shots fired his way in last night’s opener and was named the game’s first star as a result. His best work came in the second period and Everett forward Bryce Kindopp is likely still haunted by Tendeck’s left pad save with one second remaining on the clock. Does that warrant another start tonight? Or will Trent Miner get the nod on the road tonight for the Giants.

Embracing the Atmosphere: The atmosphere in Everett is easily regarded as one of the best in the entire WHL. Their fans are loud, knowledgable and are unrelenting. In the same way that the Giants used the home crowd to their advantage last night, they’ll need to do everything possible to keep the Everett crowd at bay tonight during the rematch.