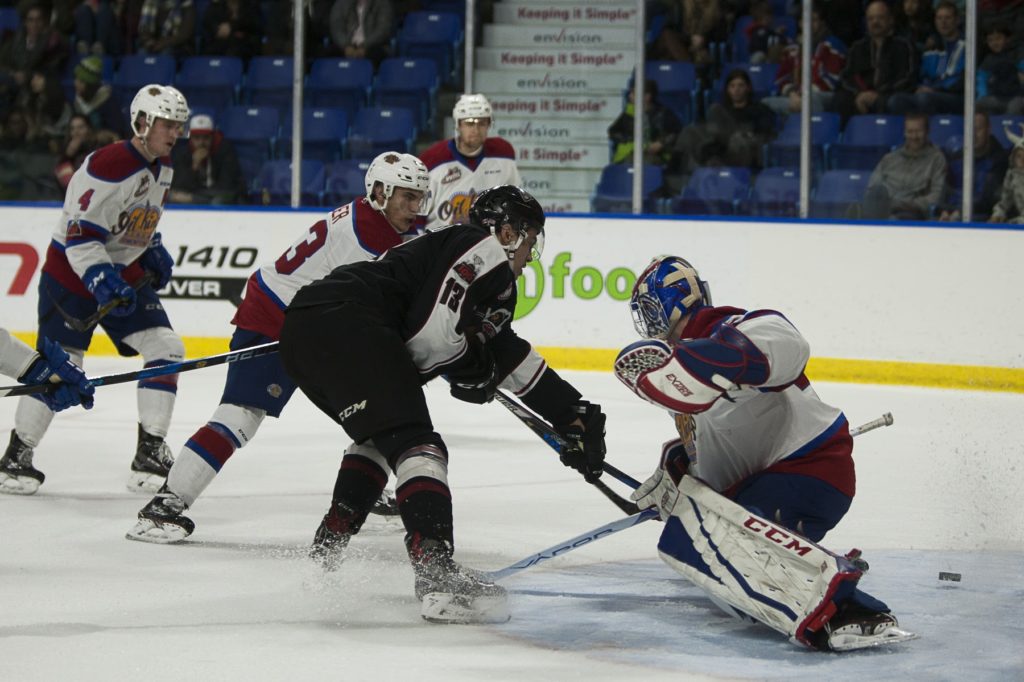 Tonight at Rogers Place in Downtown Edmonton, the Vancouver Giants begin a five-game, 10-night road trip when they clash with the Edmonton Oil Kings for a second time this season. The Giants are coming off a spirited 4-3 overtime victory over the Prince George Cougars and have only suffered one regulation loss in their last 10 games. Meanwhile the Edmonton Oil Kings have started to turn a corner as well. They are 3-0-1-1 in their last five games and are just three points back of Red Deer for fifth in the Central Division standings. The last time these teams met was on November 12th in Langley, where the Giants escaped with an 8-7 victory over the Oil Kings. Two inspired teams will be taking the ice tonight as a win for the Giants would put them into second place in the B.C. Division standings.

Last Game: A 5-4 victory at home Monday over the Calgary Hitmen

Trey Fix-Wolansky: The talented sophomore forward leads all Oil Kings in scoring with 45 points, 16 of which are goals. On November 12th against the Giants he had a goal and an assist. Fun fact: Fix-Wolansky played for Giants head coach Jason McKee with Spruce Grove during the 2015-16 season. He’s one point shy of 100 for his WHL career.

Tomas Soustal: The 20-year-old native of the Czech Republic is extremely dynamic offensively. He checks in with 10 goals and 25 assists for 35 points through 34 games. In his only appearance against the Giants this season, Soustal recorded a goal and four assists for a five-point outing.

Conner McDonald: The 18-year-old defenceman has put forth a strong offensive season so far for Edmonton. His three goals and 20 assists make him the top scoring defenceman on what is still an incredibly young blueline for Edmonton. McDonald had 27 points a season ago split with Kamloops and Edmonton and assuming he stays healthy he should obliterate those totals in 2017-18.

Matthew Robertson: Selected seventh overall in the 2016 WHL Bantam Draft, Robertson already plays the game with a tact and a poise beyond his years. He has registered four goals and two assists offensively and is only -8 on an Edmonton team that is -54 in goals for/goals against. The future is extremely bright for Robertson and this will be the Giants first look at him in 2017-18.

Josh Dechaine?: The 18-year-old Josh Dechaine is an intruiging option for Edmonton. He’s only appeared in seven games this season but boasts a 4-1-1-1 record, he has the best goals-against-average (2.93) and save percentage (.893) of the three available netminders (The others being Travis Child and Boston Bilous). Child is the 20-year-old veteran and has appeared in 23 games which is the most among the three.

Davis Koch: The veteran forward leads all Oil Kings in goals (17), sits second on the team in points (36) and had two goals and two assists against the Giants when the two teams last faced each other. Koch has played in 222 career WHL games, all with the Oil Kings and is coming off a season where he netted 70 points in 72 games.

Last Game: A 4-3 overtime victory over the Prince George Cougars

Jared Dmytriw: The new look like of Jared Dmytriw, Owen Hardy and Brayden Watts were a force on Monday against the Prince George Cougars. Dmytriw led the charge with two goals and two assists and was a +3 on the night. He’s now recorded goals in back-to-back games and seems to be playing the game with a ton of hustle and confidence.

James Malm: The 18-year-old forward scored the OT winner against the Cougars on Monday and now has 15 goals on the season to go along with his 23 assists. Malm should easily surpass the 20-goal mark in 2017-18, and tonight he’ll look to make it three-straight games with a goal when he takes the ice against the Oil Kings. When he faced Edmonton on November 12th he led all Giants with three goals and two assists.

Dylan Plouffe: The 18-year-old should have a lot of friends and family in the stands tonight as the product of Sherwood Park, AB takes the ice near his hometown. Plouffe has been awesome for the Giants and leads all Giants defenders with six goals and 24 assists for 30 points. No doubt he’ll be extra amped up for tonight’s game in front of friends and family.

Bowen Byram: Earlier in this piece, we spoke about Matthew Robertson and how highly thought of he was and is with the Edmonton Oil Kings, but four picks earlier it was Bowen Byram selected third overall by the Vancouver Giants! This showdown between two of the elite 2001-born defenceman will be a great storyline as well for tonight’s game as those two will try to outshine the other in this important game.

Tyler Benson: The Edmonton Oilers prospect will have a large contingent of friends and family on hand as well as the Giants get set to square off with Edmonton. Benson finds himself third in team scoring with 14 goals and 23 assists for 37 points and without a doubt there will be loads of die-hard Edmonton Oiler fans in the building tonight looking to watch one of their top prospects make an impact. Benson has never backed down from the big stage, and tonight could very well be one of his brightest moments in the WHL as he tries to lead his troops to victory in his hometown.