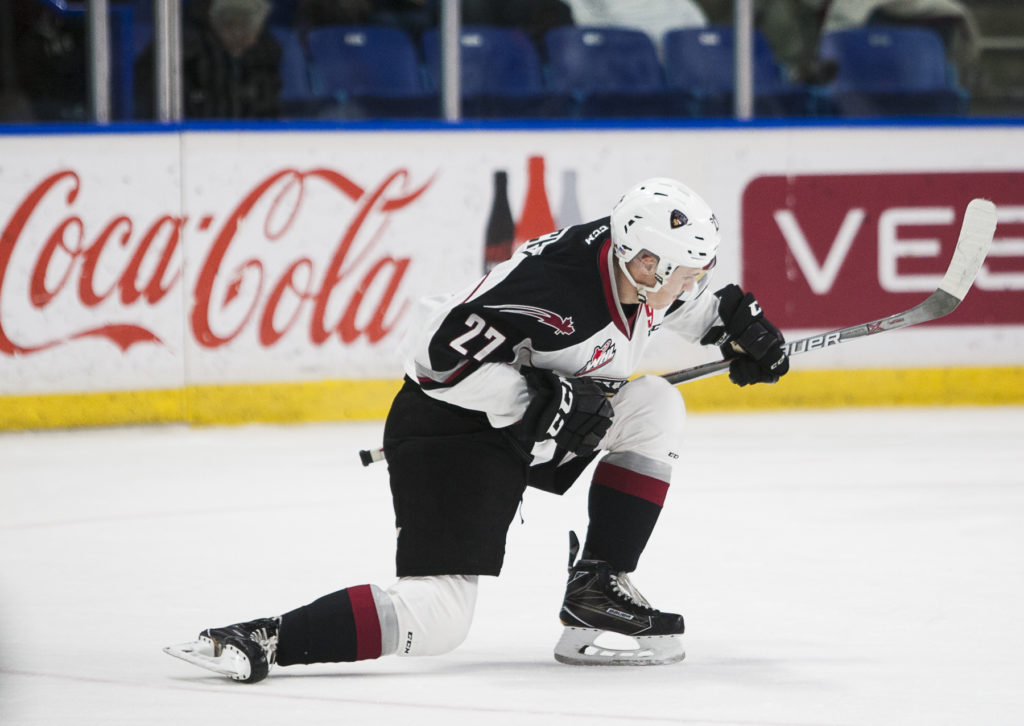 Tonight in Langley, the Vancouver Giants look to make it three straight preseason victories when they welcome their B.C. Division rivals, the Victoria Royals to town. The Giants are coming off a 7-3 victory yesterday over the Prince George Cougars while the Royals will see their first game action since last Saturday’s 5-4 OT victory over Kelowna.

Jared Legien: Could Jared Legien be found money for the Victoria Royals? The ninth overall pick from the 2013 WHL Bantam Draft (Kootenay Ice) played in the SJHL last season with the Yorkton Terriers and put up terrific numbers (30 goals, 26 assists, 51 games). So far his stint in Victoria has proven successful as he leads the Royals in scoring with three goals and four points in two games.

Eric Florchuk: The 17-year-old Florchuk had the OT winner for Victoria last Saturday against Kelowna and looks poised to make a bigger impact in 2017-18. He appeared in 51 games last season as a rookie and chipped in three goals and six assists for nine points.

Jared Freadrich: Recently acquired in a trade with Red Deer, Freadrich adds a steady, veteran presence to the Royals back-end. Last season he chimed in with six goals and 24 assists for Red Deer and was a +11. With Scott Walford away at NHL camp with Montreal, Freadrich likely becomes the ice-time leader on the back-end for Victoria.

Ralph Jarratt: At 6’2” and 223 pounds, Ralph Jarratt packs a lot of punch in his game. The 19-year-old had two goals and 19 assists last season for 21 points and was a +5 with 28 penalty minutes. He hasn’t appeared in a preseason game yet for Dan Price’s squad, but Jarratt is another defenceman who’s going to play a big role this season for the Royals.

Griffen Outhouse: Over the past two seasons it’s hard to pick a goaltender that has been more consistent than Royals 19-year-old Griffen Outhouse. The product of Likely, B.C. appeared in 63 games last season for the Royals and finished with a 2.85 goals-against-average and .915 save percentage. His 3558 minutes played were far and away the most in the WHL. Will he make his preseason debut this weekend? Time will tell.

New Coach: Now that Dave Lowry has landed in the NHL with the Los Angeles Kings, Dan Price is at the helm of the Royals. Price joined the Royals coaching staff a season ago and no doubt is familiar with the roster that he has in front of him. Price has a deep and experienced team that is expected to do some damage this season in the Western Conference, and that familiarity will likely be a big key and strength for him as he leads his team into the 2017-18 campaign.

James Malm: The Langley, B.C. product broke out in a big way last night against Prince George. He led the charge with three goals and an assist and was a threat every time he took the ice. Malm had 20 goals a season ago, and has looked very motivated in the early going to surpass that total in 2017-18. Assuming he’s in the lineup tonight, Malm should once again be front and center in the Giants attack.

Owen Hardy: The 18-year-old has had a strong preseason both offensively and otherwise for Jason McKee’s crew. He has four points in three games but has continued to play a physical and abrasive style of game. Hardy has the potential to be a real game-breaker for the Giants this season thanks to his physicality and his offensive upside.

Bowen Byram: The 16-year-old had a big game a night ago for the Giants as he posted two assists. Defensively he did a fine job as well finishing with a +1 rating. Despite his rookie status, Byram has not been intimidated by the pressure associated with being a third overall selection. He wants to play as much as possible and so far has earned a ton of trust for his coaching staff.

Kaleb Bulych: The Yorkton, SK product chipped in with two assists in yesterday’s victory and has now recorded a point-per-game so far in three preseason games. He’s got the size and he’s showing that he can hang physically in this league while chipping in offensively. These are all good signs for him and the Giants moving forward.

Ryan Kubic/Todd Scott?: These two didn’t play yesterday, which could mean that both will get a look in today’s game against the Royals. Scott is 2-0 so far while Kubic has only played a half game up to this point. No matter how you slice it, goaltending continues to be one of the glaring strengths for this Giants team and whomever gets the start on any given day gives their team a great chance to win.

Penalty Kill: Granted the Giants had a 7-0 lead early in the third period, but a string of penalties allowed the Cougars to get some traction offensively. They scored three power play goals on four third period chances, which put the Giants penalty kill at 17/25 (68 percent) through four preseason games. That will be an area that the Giants will want to clean up some over the course of their final two preseason games this weekend.