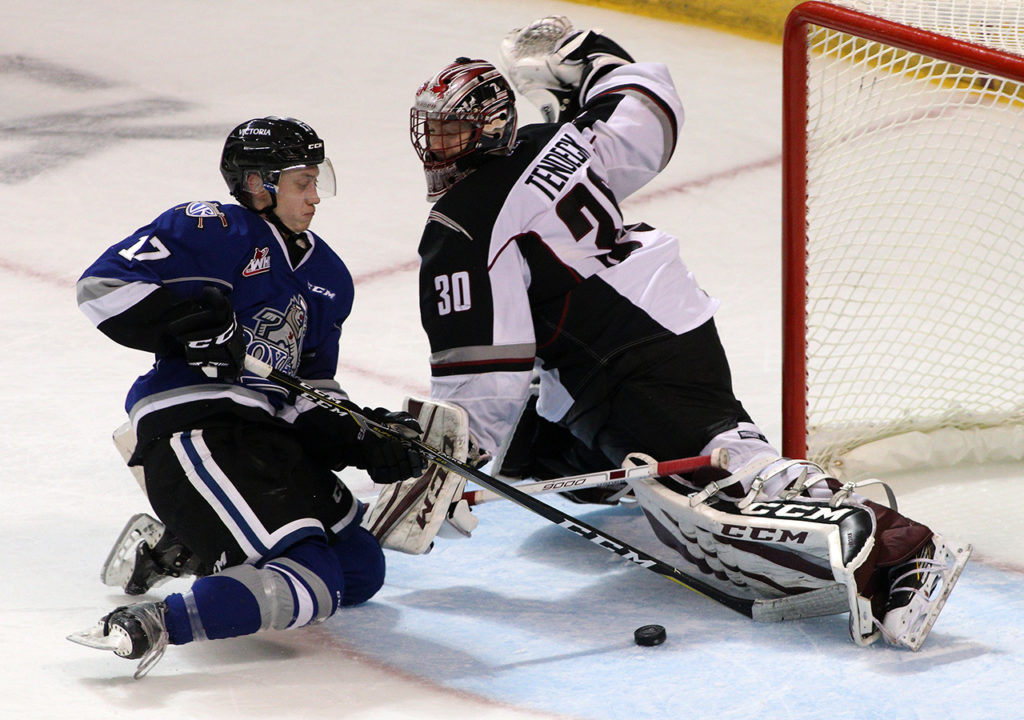 Tonight at the LEC the Vancouver Giants take the ice for their second game of a three-in-three. For the fifth time in a span of 19 games the G-Men will battle their B.C. Division rivals, the Victoria Royals. Tonight’s game marks the first of three consecutive games on home ice for the Giants who will take aim at their first home ice victory since October 6th.

Last Game: A 3-2 victory at home last night over the Edmonton Oil Kings.

Matthew Phillips: The Calgary Flames prospect leads his team in scoring with 15 goals an 22 assists. In four games against Vancouver this season he’s notched six goals and four assists for 10 points. In 20 games this season, Phillips has only been held scoreless ONCE.

Tyler Soy: The 20-year-old has points in eight straight games and during that span has four goals and seven assists for 11 points. The pride of Cloverdale, B.C. has three assists in two meetings with the Giants this season.

Jared Freadrich: The 19-year-old leads all Royals blueliners with three goals and eight assists for 11 points. Seven of his 11 points have come via the power play and he’s managed a goal and three assists in four games against Vancouver this season.

Scott Walford: The Montreal Canadiens prospect has 10 assists in 20 games this season. His +12 rating is tops among all Victoria defencemen.

Jared Legien: The 19-year-old comes into tonight’s game eight goals and 15 assists for 23 points in 20 games. He’s managed two goals and four assists for six points in four games against the Giants this season. Legien’s previous season high for points in the WHL: Eight!

Ty Ronning: The New York Rangers prospect has scored in five straight games. Over his past eight games he’s notched 10 goals and seven assists for 17 points. His 16 goals put him tied for second in the WHL.

Brad Morrison: Last night in Kelowna Morrison was named the game’s first star after a goal and two assists. For the season Morrison now has five goals to go along with 16 assists. He has three goals and five assists for eight points in his past four games.

Matt Barberis: With an assist last night, Barberis extended his point-streak to five straight games. He currently leads all Vancouver defencemen with 13 points and a +9 rating. He also leads the G-Men with 25 penalty minutes.

Darian Skeoch: The veteran 20-year-old returned to the Giants lineup last night after missing four straight games. His re-addition to the lineup was huge as he provided some solid minutes and helped calm things down in a back-and-forth style of game. Skeoch did not play in either of the previous two meetings against Victoria on October 28th and 29th.

David Tendeck: Tonight looks to be David Tendeck’s turn as he takes aim at his first victory since October 17th in Prince Albert. Tendeck was marvelous back on October 28th against the Royals and helped the Giants earn a single point. He’s 3-4-0-1 on the season with a 3.99 goals-against-average and an .879 save percentage.

Milos Roman: The draft eligible Slovak comes into tonight’s game with five goals and 12 assists for 17 points. He’s tied for the WHL rookie lead in scoring with Red Deer’s Kristian Reichel. He had three assists in last night’s game for Vancouver.