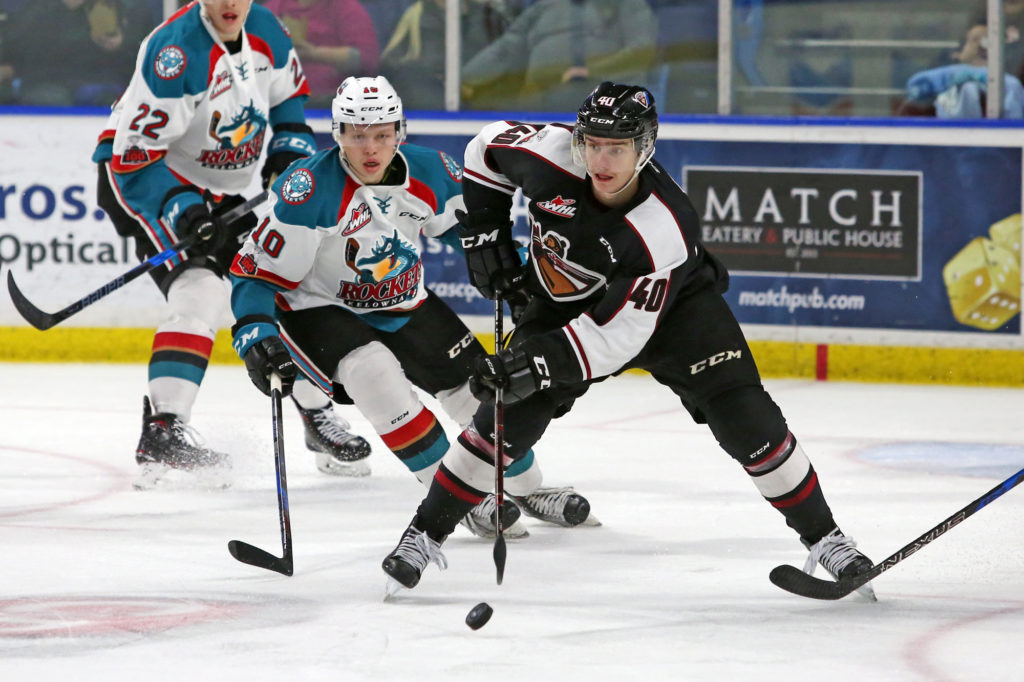 Tonight at the Langley Events Centre, the Vancouver Giants wrap up a three-game home stand when they once again to head-to-head with the Kelowna Rockets. Tonight’s game marks the third meeting in a span of two weeks for these two rivals. So far the Giants are 1-0-1-0 against Kelowna and most recently defeated them 6-1 last Saturday night in Langley. Both teams are coming off losses Wednesday and both teams will no doubt be charged up for tonight’s game that has some interesting B.C. Division implications on the line.

Carsen Twarynski: The Philadelphia Flyers prospect leads the Rockets with 13 goals. He had the OT winner against the Giants back on November 10th. He had a goal Wednesday for the Rockets in a 6-2 loss in Kelowna.

Dillon Dube: The Calgary Flames prospect didn’t play on Saturday when these two teams last met but by all accounts will be in Kelowna’s lineup tonight. His 12 goals and 26 points are both second on the team.

Cal Foote: The Rockets captain comes into tonight’s game with five goals and 16 assists for 21 points through 23 games. Nine of his points have come via the power play. He’s -6 in his last two games so no doubt he’ll be inspired to bounce back with a big game tonight in Langley.

Gordie Ballhorn: The 20-year-old leads the Rockets in plus-minus with a +!6 rating. He has two goals to go along with his 15 assists and has done everything asked of him on the Rockets blueline. The Giants can expect a big dose of Ballhorn tonight.

Forward Depth: While Kole Lind remains out the Rockets will have a few more veterans back at their disposal tonight. Last Saturday the Rockets were also without Dillon Dube, Nolan Foote, Erik Gardiner, and Jack Cowell. Cowell and Dube played Wednesday which should bode well for the Rockets tonight at the LEC.

Last Game: A 5-2 loss Wednesday at home to Lethbridge.

Ty Ronning: The 20-year-old has goals in 11 straight games. During that span he’s got 14 goals and five assists for 19 points. Only five of Ronning’s 24 goals have come on the power play. He’s been remarkably effective five-on-five for the G-Men and he’ll look to keep that streak alive tonight. He has two goals and an assist against Kelowna this season.

Tyler Benson: The Giants captain has scored three goals to go along with eight assists in his past five games. For the season he has six goals and 11 assists for 17 points through 11 games. He was named the second star of the game Wednesday and was clearly the Giants best player through three periods.

Dylan Plouffe: With three goals and 15 assists for 18 points, Dylan Plouffe leads all Giant defencemen in scoring. He’s done that while maintaining a plus-minus rating of +5. He’s got three points over his past two games.

Bowen Byram: The 16-year-old had an assist Wednesday against Lethbridge and still leads all WHL rookie defencemen in scoring with a goal and 10 assists (11 points). He’s also a +7 and logs major minutes in all situations for this Giants team.

Todd Scott: The rookie out of Minnesota will get the call tonight for the Giants. He hasn’t played since last Friday in Kamloops which ended up as a 6-2 loss for Vancouver. Scott was outstanding though in his last outing against the Rockets making 30 saves on 35 shots faced helping the Giants earn a single point on the road. His record this season is 4-5-2-1.

Power Play: The Giants have scored at least one power play in six of their last seven games. During that span they’re 12 for 25. The last time the Giants saw the Rockets they went two-for-two on the power play. Continued power play success would be a major plus for the G-men tonight at home.