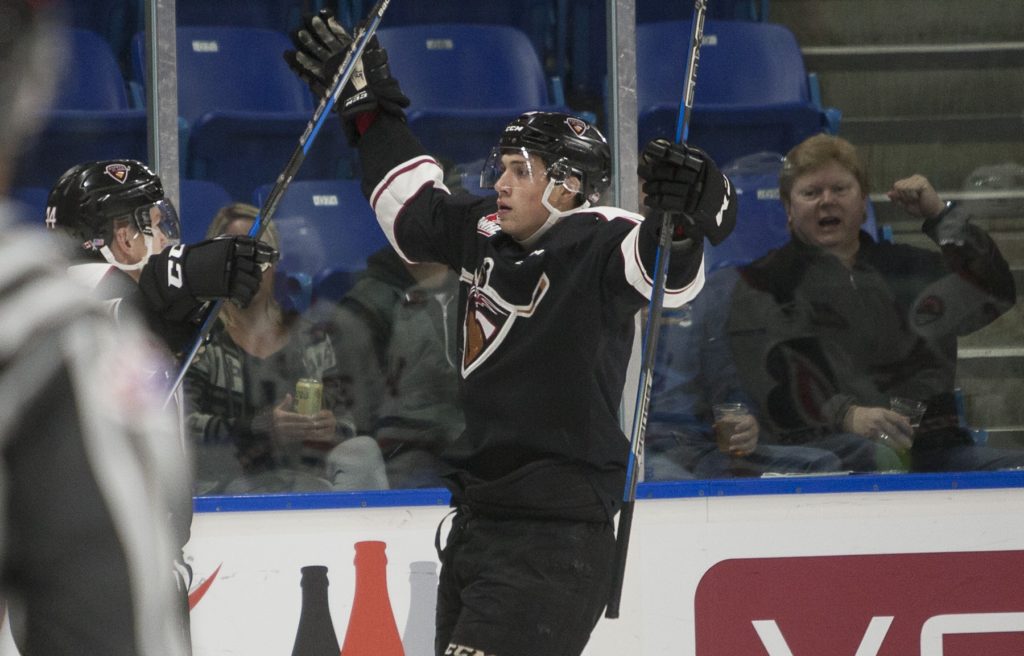 Tonight at the Langley Events Centre the Vancouver Giants take the ice for their third game in a span of three days. The task at hand tonight will be a difficult one as they welcome an Edmonton Oil Kings club who were idle last night. The Oil Kings will have no shortage of motivation as they’ve dropped five straight, while the Giants are coming off a spirited 4-1 victory last night against the league-leading Victoria Royals.

Tomas Soustal: The former Kelowna Rocket has been a welcomed addition to the Oil Kings. In 13 games with his new team he’s recorded three goals and nine assists for 12 points. The two-spotter had 47 points in 49 games last season with Kelowna.

Will Warm: The 18-year-old has a goal and seven assists for eight points so far on the season. The Whistler, B.C. native is one of the veterans on the Edmonton blueline and will see ice time in all situation tonight in Langley.

Conner McDonald: Fellow 18-year-old defenceman Connor McDonald has two goals and six assists for eight points this season. He was acquired last season by the Oil Kings in a trade with the Kamloops Blazers. His 135 WHL games is most among all Edmonton defencemen.

Travis Child: The 20-year-old is 4-5-1-0 this season and has been a steadying influence between the pipes for Edmonton. The former Swift Current Bronco has a goals-against-average of 4.33 and a save percentage of .857.

Energy: The Edmonton Oil Kings are young, scrappy and relentless and are going to provide a big-time challenge to a Giants team playing their third game in three days. A major key for Edmonton will be their start. If they can apply pressure early and put the Giants back on their heels it will give them a big-time advantage.

Last Game: A 4-1 victory at home last night against the Victoria Royals

Ty Ronning: Is there a hotter player going right now in the WHL than Ty Ronning? The 20-year-old has goals in six straight games and over his past nine games he’s scored 12 goals while adding eight assists for 20 points.

James Malm: The 18-year-old grabbed the game winning goal in last night’s game for the G-Men and has now registered five goals to compliment his 11 assists this season.

Dylan Plouffe: The 18-year-old recorded three assists in last night’s game and was named the game’s second star. For Plouffe it was his first ever three-point game in the WHL. He logged big minutes at both ends of the ice and will no doubt be tasked to do the same today.

Alex Kannok Leipert: The rookie defenceman out of Regina has played some excellent hockey as of late for Vancouver. He’s got assists in three straight games and has had to play an increased role recently with Bowen Byram away at U-17’s. He’s fast becoming a big-time dependable option for Jason McKee.

Todd Scott: The rookie from Minnesota will make his 11th start of the season tonight for Vancouver. He guided the Giants to a single point Friday night against Kelowna and will look to snag his first victory on home ice this season. He’s 3-4-2-1 on the season with a 3.66 goals-against-average and an .888 save percentage.

Stay the Course: Tonight’s game will be a challenge from a fatigue stand-point, but if the Giants can come into tonight’s game with a similar intensity and mindset they’re going to give themselves every opportunity to snag their second straight win at home.