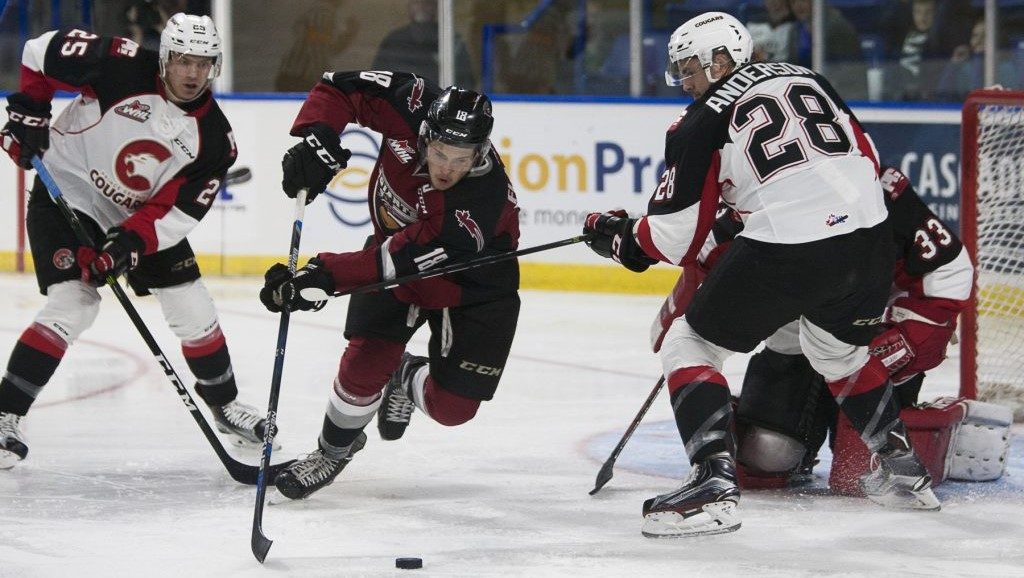 Tonight in Langley the Vancouver Giants kick off their home portion of the 2017 preseason. Standing in their way tonight are the 2017 B.C. Division champs, the Prince George Cougars, a team that is 2-0 so far during their exhibition campaign. Tonight’s game marks the start of three games in three days for the G-Men, all of which will be played at home.

Vladislav Mikhalchuk: The Belarussian-born forward has struck twice already in the preseason for the Cougars. He was the 54th overall selection in the 2017 CHL Import Draft, and is showing early on in his WHL tenure that he wants to be a ‘go too guy’ for Richard Matvichuk’s squad.

Shane Collins: The 20-year-old native of Rosetown, SK is a +2 during the preseason and is going to be logging some key minutes for Prince George this weekend particularly with the likes of Josh Anderson and Dennis Cholowski attending NHL camps

Ryan Schoettler: Lloydminster, AB native Ryan Schoettler is looking to build on a strong first season in the WHL. Last season Schoettler was +10 with a goal and nine assists, and logged some big minutes for the Cougars in all situations.

Taylor Gauthier: The 16-year-old Gauthier was selected ninth overall in the 2016 draft by the Cougars and is hoping to crack the roster full-time in 2017-18. So far in the preseason Gauthier is 1-0 with a 2.29 goals-against-average and a .929 save percentage. No word yet on whether he’ll start tonight or not, but he’ll definitely be a player to watch in the coming seasons up North.

Continue the Upward Trend: The Cougars are a season removed from their first B.C. Division Title, and have improved in each of the past three seasons since new ownership took over the team. Last season’s 46 victories will be tough to replicate given some of their key departures, but they’ve got plenty of leftover pieces who are poised to make a big impact this season.

Owen Hardy: The 18-year-old Owen Hardy has had a strong preseason up to this point and sits second only to Ty Ronning in scoring with a goal and two assists. Hardy was a second round draft pick of the Giants back in 2014 and has shown signs early this season that he’s ready to take on a larger offensive role in Jason McKee’s attack. With Hardy you’re going to get a good, honest effort every night, and look for him to factor prominently in the Giants attack this weekend.

Milos Roman: Despite not having a point in either of his first two WHL preseason games, Slovakian forward Milos Roman has looked very strong and very confident offensively. The sixth overall selection from the 2017 CHL Import Draft has shown remarkable vision on the ice, and can skate and move the puck with the best of them. This weekend could very well be a ‘coming out party’ of sorts for the 1999-born Slovak as he could be in line for plenty of ice time and opportunity.

Dylan Plouffe: Due to Hurricane Irma, Dylan Plouffe regrettably will not be attending Training Camp with the Florida Panthers. The silver lining here is that he’ll get to play some games this weekend and get himself even more prepared for his third season in the WHL. Plouffe is going to be a major factor in the Giants success defensively this season, and look for him to make the most of his increased minutes and responsibilities.

Darian Skeoch: The 20-year-old has been terrific for the Giants through camp and into the preseason. With a goal and an assist through two games he leads all Giants blueliners in scoring through the preseason. The Liskeard, ON native brings a little bit of everything to the table for the Giants and the Cougars can expect a steady dose of Skeoch tonight, assuming he’s in the lineup.

Scott/Kubic/Miner/Tendeck: The Giants goaltending situation remains intriguing as four capable options remain on the team’s preseason roster. Todd Scott is leading the way so far with a 2-0 record and a .967 save percentage, but his three counterparts have all rock solid as well. With three games upcoming this weekend, all four should get a strong look yet again. Goaltending remains one of the greatest areas of strength for Vancouver as the preseason continues.

Seizing the opportunity: With Ty Ronning, Brad Morrison, Matt Barberis and Tyler Benson all away at NHL camps, it means that there will be plenty of opportunity at both areas of the ice for younger players to step up and be counted. This weekend over the course of three games, the younger Giants will be given ample opportunity to contribute. Every shift matters and it’ll be important for all remaining players to seize the opportunities when they present themselves.