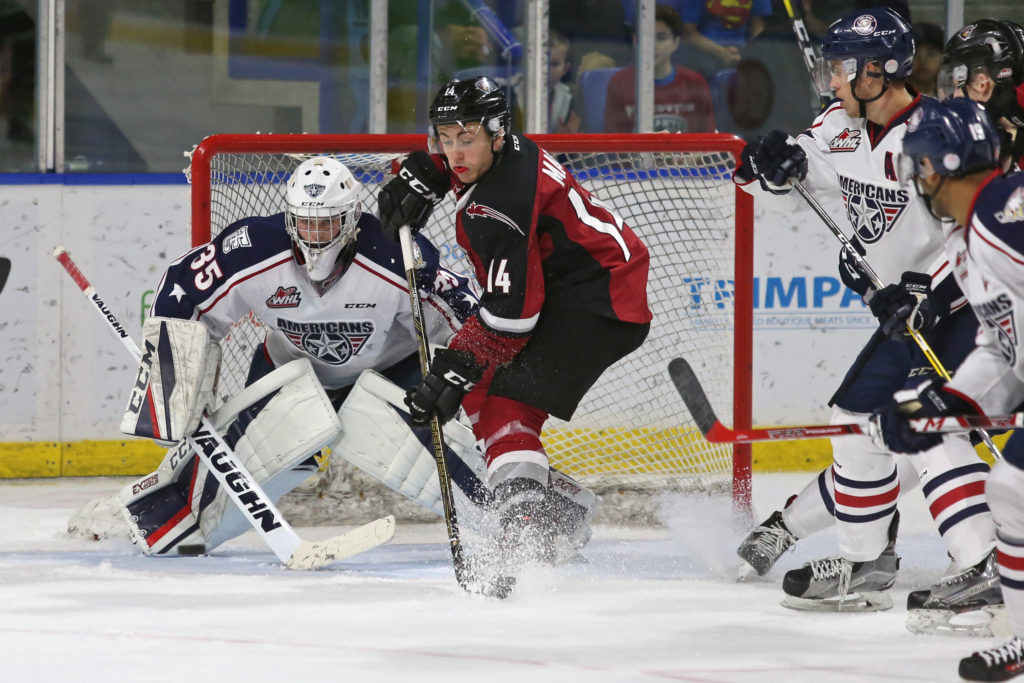 Tonight at the Langley Events Centre, the Vancouver Giants welcome the Tri-City Americans to town for the first of back-to-back games this weekend. The Ams are starting a five-game road swing while the Giants are playing game three of a four-game home stand. Both teams are coming off victories and will look to carry that momentum forward tonight.

Last Game: A 3-2 shootout victory Tuesday at home against Seattle.

Michael Rasmussen: The ninth overall pick from the 2017 NHL Draft had a goal in his first game back earlier this week. After posting four goals in five preseason games with the Detroit Red Wings, Rasmussen looks poised to improve upon his 32-goal season from a season ago.

Juuso Valimaki: A fixture on Finland’s World Junior team, the Calgary Flames first rounder has two goals and an assist in two games since returning to the Ams. Last season he also posted three goals in four games against the Giants and last season finished seventh in league scoring among defencemen with 29 goals and 42 assists (61 points).

Dylan Coghlan: Fresh off signing an entry-level contract with the Las Vegas Golden Knights, Coghlan has a goal and an assist so far this season. Last season he had 15 goals and 38 assists for 53 points in 71 games.

Power Play: Don’t let their slow start fool you. This team is lethal on the power play. Last season they finished fourth with a 24.8 percent success-rate. 15 of Michael Rasmussen’s 32 goals came via the man advantage.

Last Game: A 6-3 win at home last Friday against Kamloops

Milos Roman: The talented Slovak led all Giants with four points last Friday against Kamloops. He is now tied for the team lead in scoring with four points. Roman was named to NHL Central Scouting’s Preliminary Players to Watch List earlier this week as a ‘C’ ranked prospect.

Ty Ronning: Ronning leads all Giants with three goals through three games. The New York Rangers prospect is a threat to score every time he’s on the ice, and the Giants are hoping that his hot hands will once again be a factor this weekend.

Bowen Byram: With three assists in his first three games this season, Byram is tied for second in league scoring among rookie defencemen. Byram has been given ample playing time in all situations so far this season and has made the most of it so far.

Dylan Plouffe: The 18-year-old had two assists in last Friday’s victory against Kamloops and has an even plus-minus through the first three games. Plouffe will have his hands full defensively tonight against some of the talented Tri-City forwards, but he’ll be up for the challenge.

Todd Scott/David Tendeck: Both Giants goaltenders are likely in line for a start this weekend. Tendeck is coming off a 6-3 win last Friday against Kamloops while Todd Scott was also named to NHL Central Scouting’s Preliminary Players to Watch List earlier this week.

Discipline: Five-on-five or better will be a big key for the Giants this weekend. The penalty kill was four-for-four against the Blazers a week ago, and now sits 15th in the WHL. If the Giants can win the special teams battle tonight they’ll put themselves into a great position to win the game.