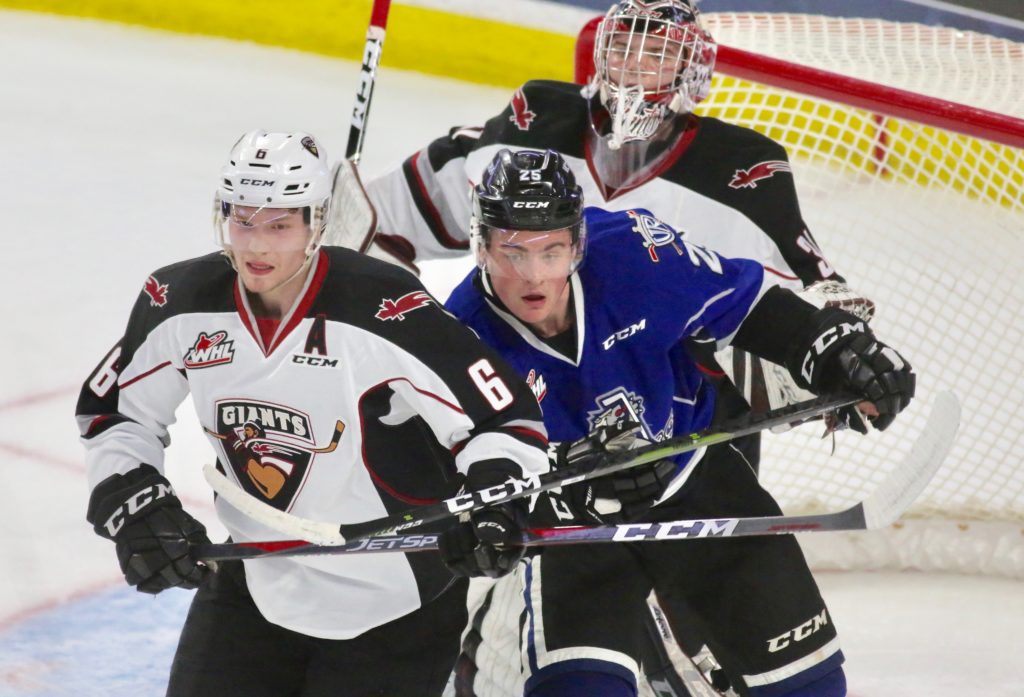 Tonight at the Langley Events Centre, the Vancouver Giants return to action when they battle their 2018 and 2019 playoff rivals, the Victoria Royals. The rivalry between these two clubs needs no introduction, and altogether they’ll face each other 10 times in 2019-20. The Giants are coming off a 4-3 victory over the Swift Current Broncos and have won three of their past four games while the Royals were 4-0 winners on Friday at home against Swift Current.

Last Game: A 4-0 victory at home Friday night over the Swift Current Broncos.

So far so good for 2001-born forward Tarun Fizer. The product of Chestermere, AB leads the Royals with four goals and three assists for seven points through his team’s first eight games. On Friday night against the Swift Current Broncos, Fizer led the Royals attack with a goal and two assists giving him his third career three-point game in the WHL. Altogether, Fizer has scored four goals in his past five games and has notched an additional three points in that span. Last season Fizer scored 13 goals and added 21 assists for 34 points. He had one goal and one assist for two points in 10 games played against the Giants. Fizer was originally selected by the Royals in Round 4 of the 2016 WHL Bantam Draft.

2001-born goaltender Brock Gould has given the Royals something to think about early on. The native of Colorado Springs, CO is 1-1 on the young season with a 1.85 goals-against-average, a .927 save percentage and one shutout. On Friday night at home, Gould turned aside all 23 shots he faced against the Broncos to earn his first career WHL shutout. More performances like that will undoubtedly lead to more playing time behind veteran Shane Farkas.

The Vancouver Giants are 0-5 lifetime against Royals veteran netminder Shane Farkas. Dating back to the 2017-18 season Farkas has put forth a 5-0 record against the Giants with two shutouts. In those five starts he’s only surrendered seven goals against. So far this season Farkas is 2-3-1-0 with a 3.68 goals-against-average and a .881 save percentage.

Last Game: A 4-3 victory last night in a shootout over the Swift Current Broncos.

BYRAM’S AT THE TOP:

Coming into action tonight, Vancouver Giants defenceman Bowen Byram sits tied atop the WHL in scoring for defencemen. The fourth overall pick of the Colorado Avalanche (2019) has scored twice and added 10 assists through 11 games this season for the Giants. Last night Byram had a goal and an assist and was named the game’s first star in a 4-3 shootout victory over the Swift Current Broncos. Byram also leads the Giants with four multi-point games and five power play points. Last season against Victoria Byram scored three goals and added five assists for eight points in 10 meetings. Earlier this week Byram was named to Team WHL’s roster for the 2019 CIBC Canada Russia Series marking the second straight season that he’s been invited to participate in that event.

AN UNFORGETTABLE DEBUT FOR SHEPARD:

As far as debuts go, Cole Shepard won’t be forgetting his anytime soon. Last night in his first career WHL game, the 2002-born forward scored a goal in regulation and in the shootout en route to a 4-3 victory for his team over the Broncos. It was a longtime coming for Shepard who signed with the Giants in July, but up until yesterday had been sidelined while he was rehabbing from an offseason surgery. What type of encore performance does Cole Shepard have in store for us today?