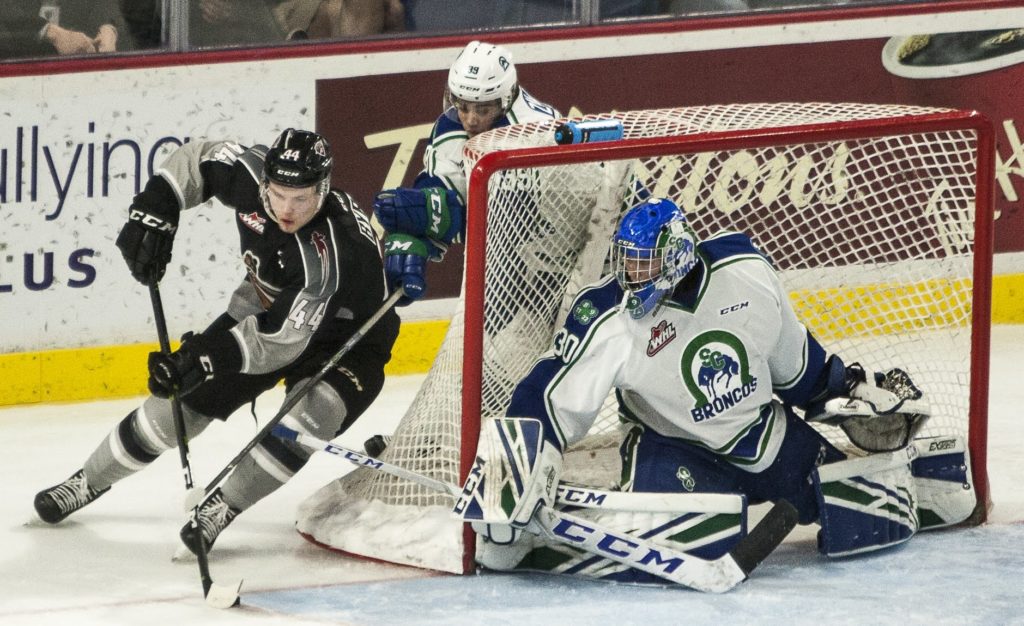 After an absence of nearly three full weeks the Vancouver Giants return to the friendly confines of the Langley Events Centre tonight for their third home game of the season. Tonight at 7, the Giants battle the Swift Current Broncos for the first and only time this season. Both teams are looking to avenge losses from last night. The Giants fell 6-0 in Kamloops while the Broncos dropped a 4-0 decision in Victoria.

2002-born forward Ben King has a bright future in the WHL and the sophomore forward from Vernon, BC comes into tonight’s game with three goals and two assists for five points. King was selected 13th overall by the Broncos in the 2017 WHL Bantam Draft. In three games so far on this road-trip, King has a goal in three games so far for the Broncos on their B.C. Division trek.

Tonight will be special night for the Bulych family as younger brother Aidan will clash with older brother Kaleb for the first time ever in the WHL. Aidan Bulych signed with the Swift Current Broncos prior to the start of the 2019-20 season and so far has scored twice in 10 games. He had 49 points in 58 games last season with the Yorkton Terriers (SJHL). Aidan and Kaleb Bulych have NEVER played against each other.

Both Swift Current imports hail from Finland. Up front, Joona Kivineimi is in the midst of his second season with the Broncos and is tied for the team lead in scoring with five points. Last season he had 16 goals for Swift Current. On the back-end Kasper Puutio is in his NHL draft year, and was selected first overall in the 2019 CHL Import Draft. So far Puutio has notched four assists through 10 games.

Tonight ‘could’ mark the 2019-20 debut for Giants rookie forward Cole Shepard. The 2017 second-round pick of the Giants signed with the team in the summer to much fanfare, and has been working tirelessly over the past few months rehabbing from an off-season surgery. His presence in the lineup should provide an offensive shot in the arm for the Giants. Last season with Penticton in the BCHL, Shepard had seven goals and 17 assists for 24 points.

After a road-heavy start to their season, the Giants can finally unpack their bags for awhile. The Giants are 1-1 so far this season at home, but will play eight of their next 10 games on home ice. Last season the Giants were 26-6-1-1 on home ice during the regular season, and no doubt a jacked up home crowd will be a welcomed sight for the Giants tonight.

CONTRIBUTIONS FROM THE BACK-END:

Two Giants D-Men –  Bowen Byram and Dylan Plouffe find themselves in the WHL’s Top Five in scoring for defencemen. Byram comes into tonight with one goal and nine assists for 10 points while Dylan Plouffe has managed a goal and eight assists for nine points. Egor Zamula (Calgary) leads all defencemen with 12 points while Portland’s Johnny Ludvig is next with 11. Scott Walford (Saskatoon) and Bowen Byram are then tied with 10. Plouffe then sits alone with nine points.