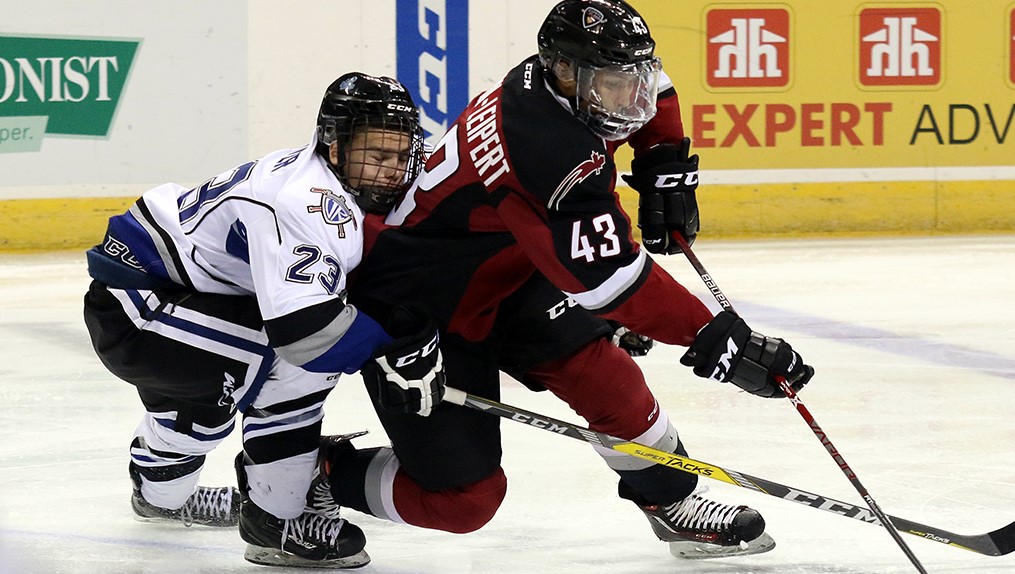 The Vancouver Giants would like to congratulate prospects Alex Kannok-Leipert (pictured), Harrison Blaisdell, Parker Hendren and their teammates on the Regina Pat Canadians for a great season after they lost in the semi-final at Canada’s national Midget championship, the Telus Cup, over the weekend.

Regina lost in overtime to the Quebec representatives in the semis on Saturday and fell 4-1 to Mississauga in the bronze medal game on Sunday.

Kannok-Leipert had a sparkling season. The 2000-born blue liner tallied 35 points in 44 games in the regular season with the Pat Canadians and was named the Top Defenceman in the Saskatchewan Midget AAA League. In the playoffs, he had one goal and 10 assists in 11 games to help Regina win the Saskatchewan championship before adding a goal and two helpers in four games en route to being named the Top Defenceman at the Telus Cup West Regionals. He added a goal and two assists in seven games at the Telus Cup. The G-Men drafted Kannok-Leipert in the fourth round of the 2015 WHL Bantam Draft.

Blaisdell was selected by the Giants in the second round of the 2016 Bantam Draft. The 2001-born forward finished the regular season with 20 goals and 21 assists in 40 games. He went on to add 10 points in 11 playoff games in Saskatchewan and two points in four games at the Telus Cup West Regionals. Blaisdell scored two goals and an assist in seven games at the Telus Cup.

Hendren, a 2001-born defenceman, scored 15 points in 43 regular season games and had one assist in eight games in the playoffs. He also played in all four games at the Telus Cup West Regionals and all seven games at the Telus Cup. Hendren went to the Giants in the seventh round of the 2016 Bantam Draft.