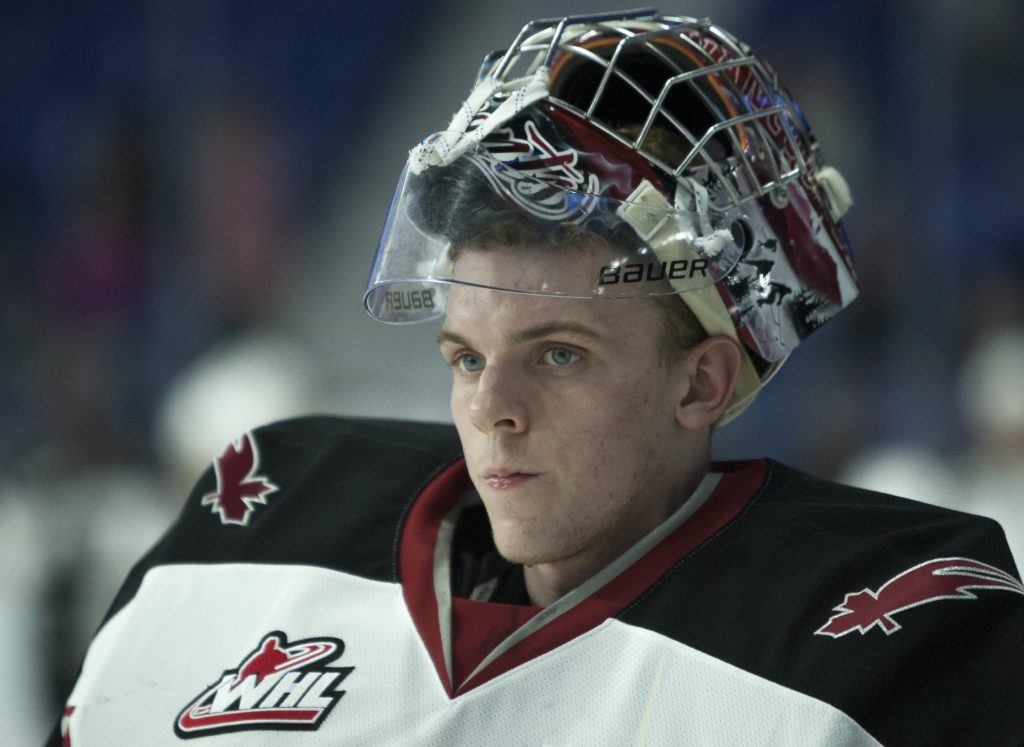 The past year has been a whirlwind to say the least for Giants goaltender Trent Miner. The product of Brandon, MB had an excellent season for the Giants both on the ice and in the classroom and his summer has been just as productive. In June Miner was drafted by the Colorado Avalanche and then in July he participated in his first NHL Summer Development Camp and also received an invite to Hockey Canada’s Goaltending Development Camp in Calgary. Earlier this week, Trent Miner caught up with Giants broadcaster Dan O’Connor to reflect on an eventful calendar year.

DO: A busy summer for you but when you reflect on all that has happened in the last year of your life, are you tired? Excited? Both?

TM: It’s been a whirlwind for sure. Having the team start out as hot as we did, then having to home for two funerals and then finishing the year off the way that we did, going all the way to Game 7 of the league finals – I’m grateful for that. Then it was time for the NHL combine where I got to meet guys that you see on social media but you don’t get to know them until you’re there. I roomed with (PA Raiders forward) Brett Leason so that was an awkward at first, but it turns out he’s a good guy. Then there was the draft itself in Vancouver, then the Summer Development Camp in Denver which was a great experience, especially with Bowen being there too. Then a trip to Calgary for the Hockey Canada Goaltending Camp. It’s all been good.

DO: You roomed with Brett Leason at the Combine? What was that like?!

TM: When I arrived in the hotel lobby they told me I was rooming with him and I thought, “Oh boy. This will be interesting.” I walked up to the room, and met him. We talked about the series and joked around a bit. But once I got to know him though I thought he was a great guy.

DO: Do you still think a lot about Game 7? Or have you been able to move on and put it past you?

TM: Yes and no. The bitterness of it is still there, but it doesn’t sting like it did. Full congratulations to Prince Albert, they earned it. But what hurts the most is knowing how close we were. I feel bad for Jared Dmytriw, Davis Koch and Dallas Hines because it was their last chance at a championship. It sucks that we couldn’t have won it for them and for the organization.

DO: Tell us about your mindset going into last season, knowing all that you had been through in your 16-year-old season?

TM: Having the experience from my 16-year-old season was important. When I first got to the WHL I was star struck for the first bit, but I soon learned that I didn’t need to get too worked up. This season I felt more relaxed and knew I deserved to be there. Also, the coaches changed the mentality of our team. We knew that “good wasn’t just good enough” and we wanted to be the best.

DO: Can you share how your outlook for this season changes now that the draft and the noise that accompanies that has gone away?

TM: I was lucky because I had school to deal with. I had lots going on academically before the draft. And regardless of if I got drafted or not I knew I was coming back to Vancouver for the upcoming season. It’s nice to have it done and knowing what I’m building my future towards. Now I know what’s going on and hopefully I can continue to be the best version of myself.

DO: Academics have always been important to you. Where did that drive come from?

TM: My family had a rule where if my marks weren’t good enough, I wasn’t allowed to play hockey. So that helped me prioritize my time, making sure my work was done and not leaving it to the last minute. Also, both of my brothers were good in school so that drove me to work even harder. Hockey won’t last forever so you might as well learn as much as you can.

ON THE LIGHTER SIDE

DO: Who’s your funniest teammate?

TM: It depends on what kind of humour you’re looking for. Davis Koch was always pretty funny. His jokes are really quick-witted. Another one I’d have to say would be Bowen Byram. His jokes could be about anything. It’s hard to pick just one out of our group. There are a lot of funny guys in that room.

DO: Who is the toughest Giant to practice against?

TM: I’d have to say Owen Hardy. Every time he comes to the net there’s a big body of mass coming straight at you. He’s got a heavy shot too so that doesn’t hurt him. He’s a big force and he’s strong. He’d be up there for sure.

DO: Is there a player that you think is ready to break out this season?

TM: This might be an obvious one but I think Justin Sourdif. He had a great season last year but I hear he’s had a good off season and now he’s going to play for Canada at the Hlinka. I think he’s going to take some big steps and have a breakout year.

DO: How often do you and David Tendeck communicate through the summer? Are you guys taking a break from each other or do you chat regularly?

TM: Absolutely we’re in regular contact. There was a video of Alex Newhook scoring a goal on me in Colorado and we were joking around about that a bit. He’s a funny guy and he’s easy to talk to.

DO: How do you manage the big expectations that come with next season?

TM: We’re expecting to be a good team but we all understand that you don’t just win games because you’re supposed to be good. We know that nothing is going to be given to us. We are going to have to work hard and earn it.