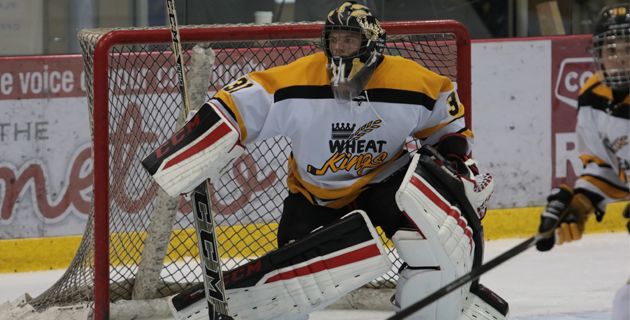 The Vancouver Giants would like to congratulate nine prospects on being selected to their respective provincial U-16 camps ahead of the 2016 Western Canada U-16 Challenge Cup which will be held in October in Calgary.

Defenceman Bowen Byram, who the Giants drafted with the third overall pick in the 2016 WHL Bantam Draft, will attend Alberta’s camp along with forwards Max Bulawka, Lukas Konashuk and Evan Patrician. The camp will be held from July 5-10 in Camrose. 80 players were invited to the Alberta provincial camp.

Goaltender Trent Miner (pictured), who Vancouver selected with the 20th overall pick in the Bantam Draft, and forward Parker Johnson were among the 40 players who attended Manitoba’s camp from May 12-15. Manitoba is scheduled to have a skills development camp in July and a prep camp in August.

Forward Harrison Blaisdell and blue liner Kade Olsen were both invited to attend Saskatchewan’s camp which will take place from August 1-5 in Wilcox. 43 players are scheduled to attend the camp.

Forward Aidan Barfoot was one of 44 players chosen to attend British Columbia’s camp which will be held from July 13-17 in Shawnigan Lake.