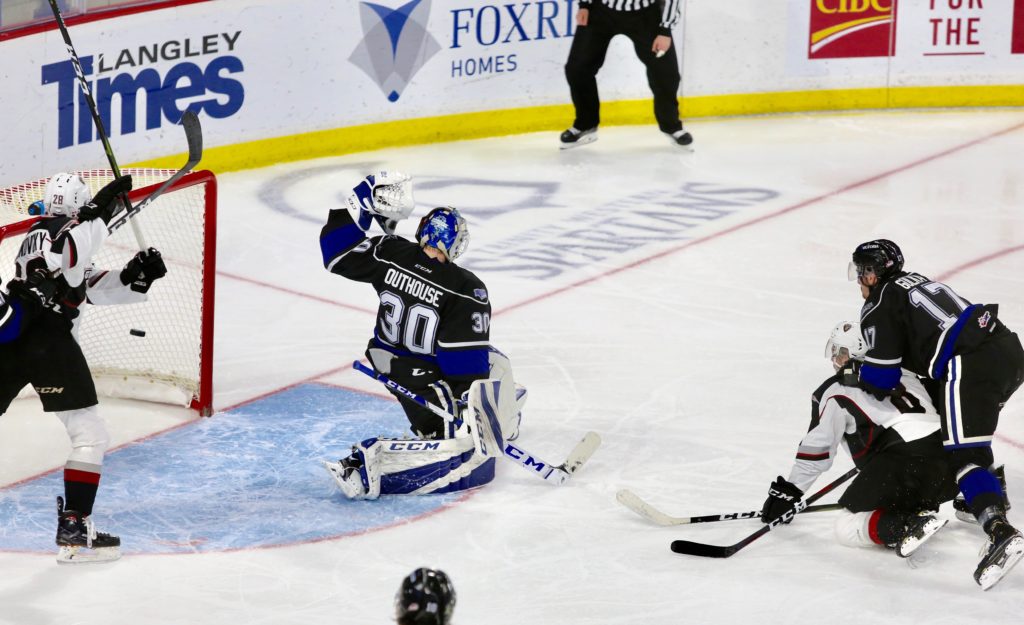 The Vancouver Giants are heading to Vancouver Island up 2-0 in their second-round series with the Victoria Royals. Saturday night in front of 4586 at the LEC the Vancouver Giants earned a 2-1 overtime victory over the Royals. Tristen Nielsen ended the game at 3:29 of overtime giving the Giants their fourth straight victory in the 2019 WHL Playoffs. Lukas Svejkovsky scored the other Giants goal at 5:51 of the second period on a power play. Ralph Jarratt responded with Victoria’s goal at 10:12 of the third, also via the power play. David Tendeck earned his third victory of the playoffs between the pipes for the Giants stopping nine of the 10 shots he faced while Griffen Outhouse stopped 37 of Vancouver’s 39 shot attempts.

VAN – Lukas Svejkovsky’s second goal of the WHL playoffs ended up the WHL Highlight of the Night. With Victoria killing off a five-minute major penalty assessed to Jake Kustra, Svejkovsky took a pass in the right-wing circle, raced around the Royals net and snuck a low shot past Griffen Outhouse to give the Giants a 1-0 lead.Tristen Nielsen and Alex Kannok Leipert drew assists.

VIC – Ralph Jarratt (2) ended the Giants shutout streak at 10:12 of the final period when his shot from the left-wing point deflected off three different Giants and past David Tendeck. Jarratt’s power play goal was assisted by Igor Martynov.

VAN – 3:29 into overtime the Vancouver Giants secured the victory when Davis Koch spun off a check in the left-wing corner, centered a pass into the slot for Tristen Nielsen (3) who one-timed the feed up and over the glove of Griffen Outhouse and in. Seth Bafaro drew the second assist. After the goal was scored, Royals goaltender Griffen Outhouse jumped on top of Nielsen creating a post-game melee that took a few moments to break up

Victoria:1/2 on the Power Play

Next Game: The series now shifts to Victoria for Game 3 of the series Tuesday night at 7:05 PM from the Save on Foods Memorial Centre.