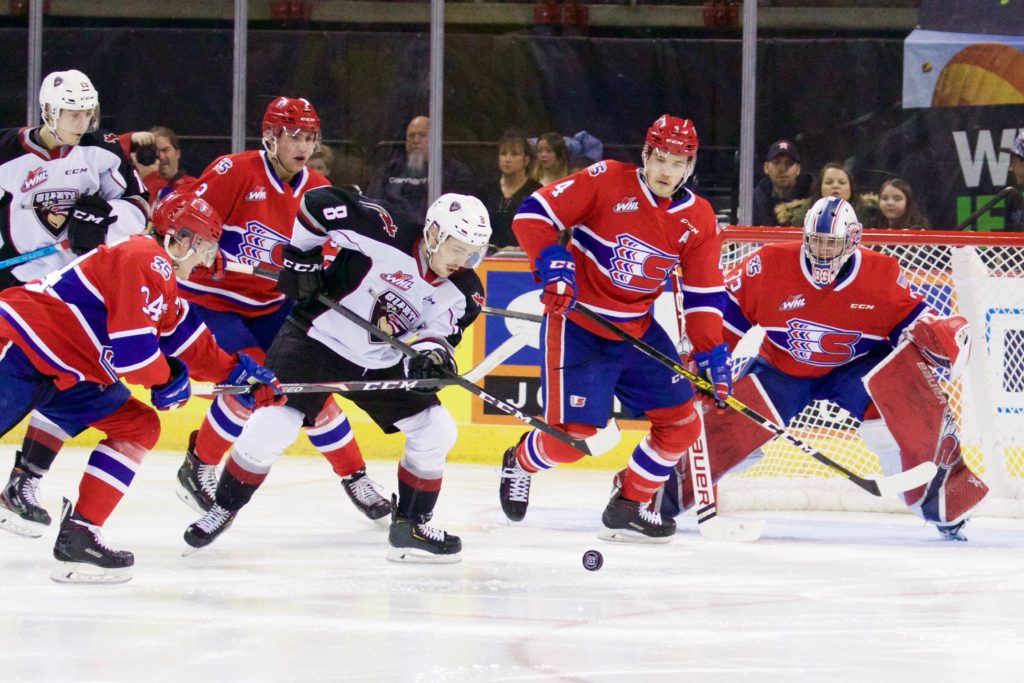 The Vancouver Giants have now won back-to-back games in overtime. Friday night in Spokane, WA the Vancouver Giants (13-10-1-1) earned a 3-2 come-from-behind victory over the Spokane Chiefs (12-9-3-0). Tristen Nielsen scored his team-leading 13th goal of the season on a breakaway at 3:41 of overtime completing the comeback for the Giants who trailed 2-0 after two periods. Justin Sourdif (11) and Milos Roman (12) scored for the Giants in regulation while Seth Bafaro added two assists on the night. Adam Beckman and Erik Atchison responded with goals for Spokane. David Tendeck stopped 20 of 22 for Vancouver while Lukas Parik made 33 saves for Spokane.

NIELSEN’S OT HEROICS GIVE THE GIANTS A VICTORY IN SPOKANE

SPO – Erik Atchison extended the Chiefs lead to 2-0 at 14:34 when he re-directed home a point-shot from Bobby Russell home for his fourth goal of the season.

VAN – Justin Sourdif got the comeback attempt started for the Giants at 3:47 when he picked off a pass at the Chiefs blueline, raced in alone and wired a low shot home for his 11th of the season.

VAN – Milos Roman tied the score at 2-2 at the 9:54 mark when he tipped home a pass from Seth Bafaro in close on Parik. For Roman it was his 12th of the season. Tristen Nielsen earned the second assist.

VAN – Tristen Nielsen ended the game at 3:41 on a backhand deke on a breakaway. Seth Bafaro started the play by intercepting a cross-crease pass in front of the Giants net before springing Nielsen down the left-wing side.

Next Giants Game: Tomorrow night in Tri-City against the Americans at 7:05 PM.