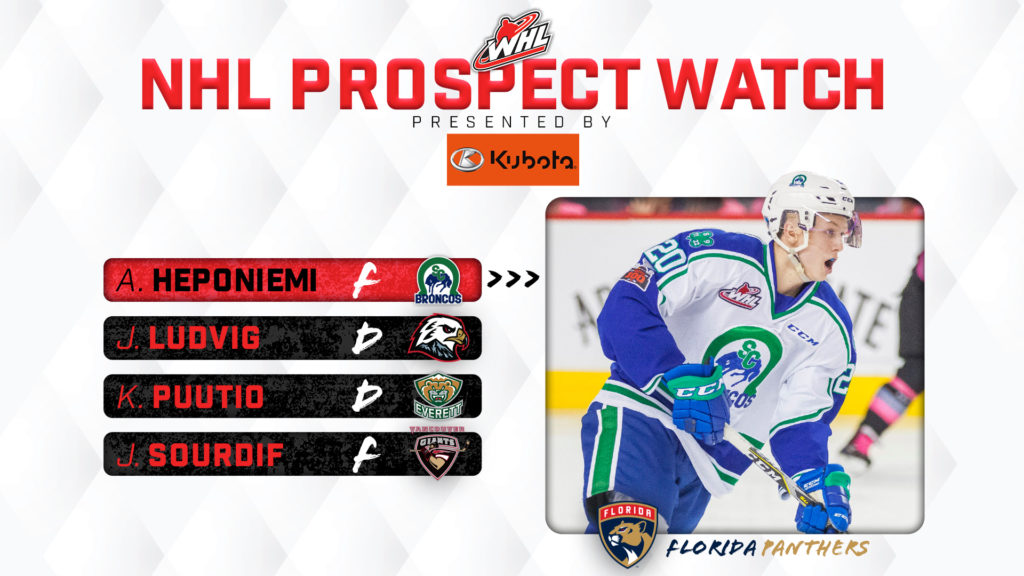 As we count down to the start of NHL Training Camps later this month, we’re taking a look at the WHL prospects looking to make an impression at the next level this season. Over the month of September, WHL.ca will feature some of the current and past WHL talent recently drafted or signed to NHL contracts, and having appeared in fewer than 50 NHL regular season games.

We continue our 32-part series with a look at the prospect pool of the Florida Panthers.

Aleksi Heponiemi – Swift Current Broncos
Forward Aleksi Heponiemi captured plenty of hardware over his time in the WHL. He won the Jim Piggott Memorial Trophy as Rookie of the Year, the Brad Hornung Trophy as Most Sportsmanlike Player, was named to the Eastern Conference First All-Star Team, and his Broncos won the WHL Championship in 2018. Heponiemi made his NHL debut January 30, scoring the overtime winner for the Florida Panthers on his debut in a 3-2 victory at Detroit. In all, the product of Tampere, Finland made nine appearances in the NHL last season, adding six assists in six games with the Syracuse Crunch of the AHL.

What a stage in OT to get it — congrats to Aleksi Heponiemi! pic.twitter.com/UKENEuilez

John Ludvig – Portland Winterhawks
Former Portland Winterhawks captain John Ludvig will begin his second season of professional hockey this fall after tallying eight points (2G-6A) in 13 games with Syracuse of the AHL during the 2020-21 campaign. The product of Kamloops, B.C. spent three seasons in Portland, topping out at 62 points, a +46 rating and a spot on the WHL Western Conference First All-Star Team during the 2019-20 season. Ludvig was originally selected by the Florida Panthers in the third round of the 2019 NHL Draft.

John Ludvig on the attitude he’s taking into camp and his game overall: “You have to be there every day to work and you can’t take a single day off, that’s the biggest thing to me becoming a pro.” pic.twitter.com/UfgLapRHqY

Kasper Puutio – Swift Current Broncos / Everett Silvertips
He played just one season in the WHL, but defenceman Kasper Puutio made an impression with the Swift Current Broncos and Everett Silvertips. The product of Vaasa, Finland totalled 28 points in 56 WHL games, 35 of which came with the Broncos before a mid-season trade to the West Coast. Puutio played 29 games in Finland’s Liiga last season, and has appeared in two more to start the 2021-22 campaign. He was selected by the Panthers in the fifth round of the 2020 NHL Draft.

Justin Sourdif – Vancouver Giants
Forward Justin Sourdif begins the 2021-22 season on the heels of being named the B.C. Division Player of the Year last spring. The product of Surrey, B.C. led all B.C. Division skaters in assists and points during the 2020-21 WHL season, finishing tied for third in WHL scoring with 34 points. Sourdif was selected in the third round of the 2020 NHL Draft by the Florida Panthers, and over the past three seasons with the Vancouver Giants, the third overall pick in the 2017 WHL Draft has compiled 134 total points (60G-74A).